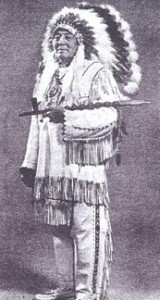 March 16 at 2 pm, a free program sponsored by the Egg Harbor Historical Society will be presented at the Town Hall located east of Carlsville on County Road I. The program will be on the life of Egg Harbor’s Chief Oshkosh. Lauren Bremer, Gibraltar High School English teacher, will present her research on the life of Chief Roy Oshkosh.

Bremer puts her education to work writing for the Peninsula Pulse and Door County Living. She often received historical assignments from her editors at Door County Living and wrote about Oshkosh in the spring of 2011.

Oshkosh was born in 1898, died and was buried in the Egg Harbor Cemetery in 1974. He became Chief of the Menominee Tribe upon the death of his father, Chief Reginald Oshkosh in 1932.

Oshkosh graduated from Carlisle College with an engineering degree and was recruited to work in the Sturgeon Bay shipyards during WWII. After the war, friends encouraged him to remain in Door County. He built his home in Egg Harbor in 1945 to which he added Chief Oshkosh’s Trading Post. Many in the county remember Chief Oshkosh as an Egg Harbor businessman, member of the Door County Chamber of Commerce and active in the Boy Scouts.