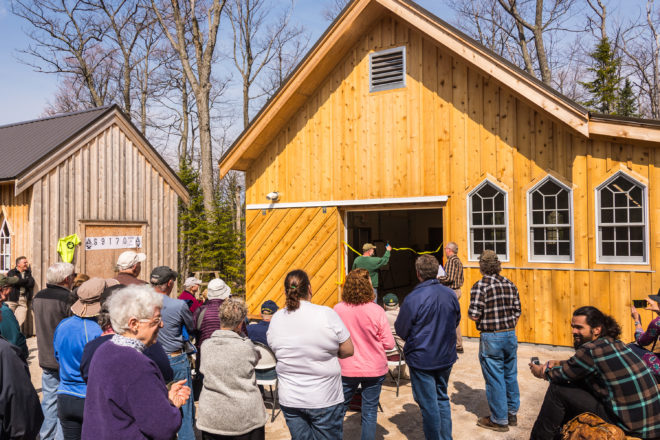 The Clearing Folk School celebrates its newest addition: The Forge blacksmithing shop, which opened April 26 after nearly a decade of planning and fundraising. Photo by Len Villano.

There’s a line in a David Crosby song that goes like this: “It’s been a long time comin.’” I have sung that line in my head countless times over the past year or two with regard to The Forge at The Clearing, the planning and building of which has been in the works, officially at least, since 2010. But it’s up and running, and we are now able to offer classes in metal craft, a new and exciting program area for us.

Actually, the spark for the idea of a forge at The Clearing was struck in 2005, when, while in the process of planning and designing our Workshop building, we considered including a forge as part of that facility. We couldn’t—building code didn’t allow it—but the idea stuck, and 12 years later, The Clearing has a wonderful facility for classes in forging (blacksmithing) and other metal craft, such as metal casting and metal sculpture. Given that forging is a foundational folk school craft, The Clearing’s Board of Directors and staff couldn’t be more pleased that it’s now part of our program.

It will come as no surprise that, in addition to the hundreds of people who donated to support the Forge project, certain people deserve special mention and special thanks for the critical role they played. 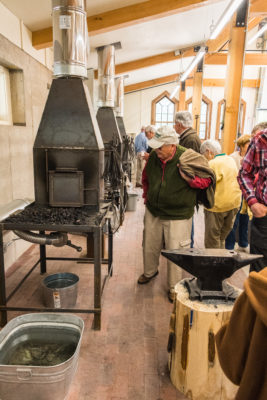 The catalyst was a donation of forging tools and equipment from Jean Barrett. Jean’s husband, David Nevalainen, had taught forging classes in the mid-2000s in The Clearing’s Winter Program at The Forge at Cedar Pond, his shop north of Baileys Harbor. It was those classes in David’s shop that suggested to us that forging and other metal craft could be a successful program area for The Clearing. David was tragically killed in 2008. In the fall of 2010, Jean generously offered to donate all of David’s forging items—tools, equipment, supplies, raw metal stock, books and many pieces of metal art that he had made to sell. (We sold the art items in our store, with all proceeds supporting the Forge building project.) In October of 2010, The Clearing’s Board of Directors voted unanimously to accept Jean’s gift. This vote committed us to building the Forge.

Well, we needed a place to store the items that Jean had donated. We didn’t have a good place at The Clearing. But Tim Stone did. Tim was a member of our Board—had been since 1988, serving as Board President for 20 years. He had a storage building on his property and generously offered it as a location to store David’s tools and equipment. (Had Tim known, in November of 2010, that “temporary” would end up meaning six and a half years, he may have thought a bit longer about his offer.) And Carolyn Kimbell, our Board President at the time, owned, with her husband Bob, a barn north of Baileys Harbor, and offered it as a place to store the many pieces of raw metal stock that came from in and around David’s shop.

Before we started on a building design, we decided to visit some blacksmiths in their shop to get an idea of what we were up against. So, in the winter of 2011, Erik Rinkleff, The Clearing’s Assistant Director, and I visited Dan Nauman in his forge—Bighorn Forge—near Kewaskum, Wisconsin. We knew, from Jean, that David had hired Dan to teach him the basics of forging. And it was Dan who helped Jean inventory and value David’s tools, equipment and supplies. When we met with Dan in his shop, it became clear to us that he was someone who could be a big help to us with our building. Thankfully, he was willing, and has been our consulting blacksmith since that first meeting. Dan has been invaluable to us in designing and equipping the building. He built the four forge work stations (and he’s building two more to be added later this year), forged many of the tools that are being used in the Forge and has advised us on the purchase of many of the tools and supplies needed to outfit the building. And he is now one of our forging instructors. He taught his first class in the Forge during the week of June 4th of this year, and will be back in September to teach another week-long class. 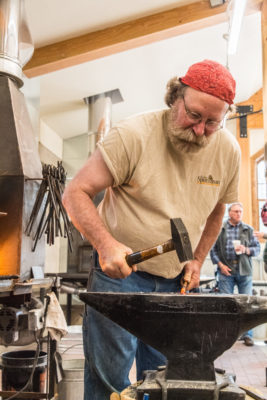 Choosing an architect was easy. We chose Pat Mangan. Pat has been involved at The Clearing since the early 1980s, when he helped with the Schoolhouse rebuild. (The Schoolhouse had been badly damaged in a fire in June of 1981.) He had designed the Jens Jensen Center in the mid-1990s and the Workshop in the mid-2000s. He had also helped with extensive renovations of the East Dorm in the early 1990s and the West Dorm in the early 2000s. So Pat knows The Clearing well, and dove head first into researching forge building design and construction. The result is a building that will not only work beautifully for classes, but that is also attractive—very much in The Clearing aesthetic, a bar that was set high by our founder, Jens Jensen.

We were fortunate to have Jim Grasse as our general contractor. It was a pleasure working with him, and he was clearly dedicated to building us a fine building at a fair price. When he spoke at the ribbon cutting ceremony on April 26, he referred to working for The Clearing as the “crown jewel” in Door County for a general contractor. That was high praise from someone much admired in the community!

And last, but certainly not least, Brain Buchholz, The Clearing’s maintenance person and jack of all trades, took an interest in the Forge “above and beyond the call of duty.” He has done much to improve the building and has made it better in many ways. Brian has a long history at The Clearing, having grown up here, so has a unique perspective on the place. The many things he has done in helping build the Forge has, once again, shown his dedication to The Clearing.

To those mentioned above, and to all the other people who helped in some way to realize our goal of building the Forge, thank you! It’s the latest example of how The Clearing community comes together to make a great institution even better.