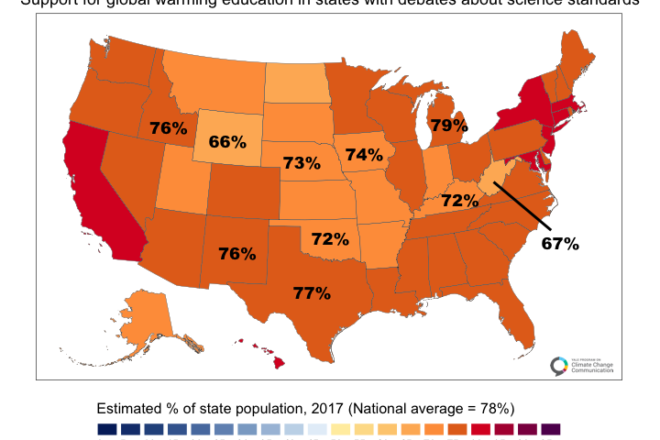 The article below provides reasons to be optimistic about the future. It is presented by the Climate Change Coalition of Door County with permission from the Yale Program on Climate Change Communication, led by Anthony Leiserowitz. The work of the Yale Program shows support for teaching kids about the science of climate change is widespread and bipartisan among the general public.

Americans overwhelmingly support teaching our children about the causes, consequences, and potential solutions to global warming – in all 50 states and 3,000-plus counties across the nation, including Republican and Democratic strongholds.

Despite this strong public support for climate education, there have been recent debates in several states about whether to include climate change in science education standards. These debates, fed by campaigns like the libertarian Heartland Institute’s recent mailing of lesson plans dismissing the scientific consensus that global warming is happening to teachers across the nation, indicate that classrooms are the latest battleground over climate change science.

The most recent effort to remove passages about human-caused climate change from science standards came to a head in Idaho. Several Idaho legislators argued that students should not be taught that climate change is human-caused, but instead be given opposing arguments and allowed to decide for themselves.

In response, teachers and citizens argued that failing to teach children the scientific facts about climate change would rob them of important information crucial not only to their scientific education, but also their future. After several years of debate, the state legislature finally approved science standards that include sections on human-caused climate change.

The fact that climate change is happening and human-caused is not a matter of scientific debate: many studies have examined climate scientists’ conclusions about global warming and have found scientific agreement similar to the level of consensus that smoking causes cancer (i.e., more than 95 percent).

Idaho is not the only state that has recently debated its climate science standards. At least nine other states have debated their own education standards, many of which were motivated by efforts to exclude the teaching of climate change science.

Many teachers, however, need training and support to implement climate change science standards in their classrooms. Recent research published in Science found that many teachers are themselves not certain about climate change.

For example, only 30 percent of middle school and 45 percent of high school science teachers understand the extent of the scientific consensus. Furthermore, of the educators who do teach climate change, many suggest the cause is ambiguous or uncertain to their students, while 30 percent actually incorrectly teach that global warming is naturally caused. Correcting the misperception about the scientific consensus that global warming is happening and human-caused is a key educational challenge for both teachers and students.

Numerous groups support teachers with educational resources like the Climate Literacy and Energy Awareness Network, the Alliance for Climate Education, and the National Center for Science Education.

Interested in more downscaled climate change opinions? Check out our Yale Climate Opinion Maps. If you’d like to know more about how these maps were created, please see our methodology.

The Yale Program conducts scientific research on public climate change knowledge, attitudes, policy preferences, and behavior, and the underlying psychological, cultural, and political factors that influence them. The Program also engages the public in climate change science and solutions, in partnership with governments, media organizations, companies, and civil society, and with a daily, national radio program, Yale Climate Connections.

The fifth annual Door County Climate Change Forum will be held at Stone Harbor Resort in Sturgeon Bay on Saturday, May 19, 9 am to 2 pm. The following programs are featured:  “A Risky Climate for Cranes, Wetlands, and Our World” with Rich Beilfuss, president and CEO of the International Crane Foundation; “Making the Transition to a Clean Global Energy System through Innovation” with Greg Nemet, associate professor, University of Wisconsin-Madison, La Follette School of Public Affairs and the Nelson Institute Center for Sustainability & the Global Environment; and “Local Responsibility, Local Leadership, Local Action” with Mayor of La Crosse Tim Kabat and Keith Reopelle, director of the Dane County Office of Energy and Climate Change

The Climate Change Coalition of Door County is a non-partisan organization that through education, outreach and civil dialogue increases public understanding of climate change and its many detrimental impacts at home and around the world.

The Climate Corner is a monthly column featuring a variety of writers from around the state and Door County addressing various aspects of the challenges and opportunities climate change presents. The Corner is sponsored by the Climate Change Coalition of Door County, which is dedicated to “helping to keep our planet a cool place to live.” The Coalition is always open to new members and ideas. Contact the Coalition at [email protected]