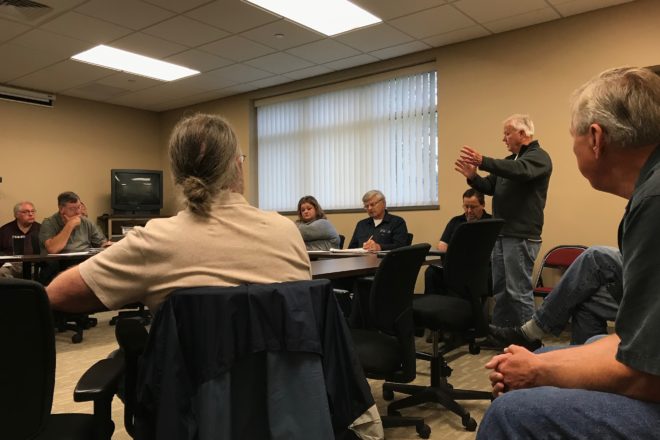 During the Sept. 10 meeting of the Kewaunee County Land & Water Committee, Algoma resident Dick Swanson (standing) talks about photographing the activity after the Sept. 6 manure-runoff incident at El-Na Farms in the Town of Lincoln. Photo by Jim Lundstrom.

It seems a shame that Davina Bonness, the head of Kewaunee County’s Land & Water Conservation Department, has to spend much of her time justifying the hard work she and her staff do, but she does that because the system is stacked against her department.

The staff of six is responsible for the largest concentration of cows in the entire state: 97,000 cows and calves as of Jan. 1, 2018, according to the USDA’s latest bovine census. That’s almost five times the county’s human population.

But she does it with aplomb and foreknowledge that no matter what they do, someone in the county will be unhappy with her department’s performance.

“We’re trying to do the best with the capacity we have,” Bonness said at the well-attended Sept. 10 meeting of the Kewaunee County Land & Water Committee in Luxemburg.

The department had to deal with two recent manure-runoff events that happened a month apart: a liquid-manure spill reported on Aug. 7 at Kinnard Farms in the Town of Ahnapee, and a solid-manure runoff at El-Na Farms in Lincoln after a heavy night rain on Sept. 5.

Bonness said in the first incident, liquid manure was applied to a four-acre field, and then a heavy rain hit – with reports of between two and five inches falling in the area – causing runoff from the field.

“We’re getting these large rain effects,” she said.

That was also the problem with the most recent event with El-Na Farms, but in that case it was, in her words, “tons” of solid manure applied to a field, followed by “tons of rain” hitting before the manure could be incorporated into the soil. She said the second event was more concerning because the land is shallow bedrock, and observers could see the manure-polluted rainwater entering sinkholes.

On Sept. 6, the county issued a drinking-water advisory, and public-health staff went door to door to notify landowners in the vicinity.

Bonness said Corporation Counsel Jeffrey Wisnicky is working on details for a citation to be issued to Kinnard Farms for its spill. The committee noted that fines collected for citations go into the county’s general fund, when they should be going to water testing or relief efforts for residents affected by manure pollution.

“These fees need to come back to help us here,” said committee member Gerald Paape.

“Right now, all I’m allowed to do is issue citations,” Bonness said.

She said she’s seeking a grant from Wisconsin Coastal Management for water monitoring.

Bonness added that her department has taken a lot of flak for its response time to the Kinnard spill, but she wasn’t made aware of it until a 7 pm email alert. She said when the Department of Natural Resources responds to a spill, her department does not because the DNR has overriding authority.

“We know the DNR is not going to be a satisfactory response time,” said committee member Lee Luft. “That’s why we’re in this situation. We have these limitations. It’s not satisfactory. We’ll probably have more of these major events.”

That prompted discussion among committee members and county board supervisors in attendance about the need to budget more money for the Land & Water Conservation Department, including for personnel and water testing.

“The budget’s not finalized yet,” Luft said. “It’s pretty plain at this point we need at least one additional staff person and [to] be able to do water testing. We have to move away from limitations on your office. These are things we have control over. I’m going to be pushing to get another individual and funds necessary for water sampling.”

“That is something we really have to come to grips with,” he said.

Committee Chair Chuck Wagner said he wouldn’t make that correlation because although there may be a higher concentration of cattle on fewer farms, those farms are buying or renting a lot more land on which to spread that manure – an assertion backed up by committee member Aaron Augustia, co-owner in his family’s Augustian Farms.

“We are hauling it farther than ever before,” he said.

• Bonness reported that Kidz Zone Day Care in Casco has registered elevated nitrate levels in its water. It also happened to Village Kitchen Restaurant in the same community last year. The problem, she said, is that everyone in Casco has wells in ground that is sandy gravel.

Bonness and Luft spoke about Kewaunee County issues at the Aug. 28 Water Quality Task Force hearing in Green Bay, and among their requests to the committee was for assistance for people who can’t drink from their wells. She also pointed out that NR 151, the recently enacted statute that regulates manure spreading in the 10-county eastern Wisconsin karst region deals with bacteria and pathogens, but not nitrate, acknowledging that nitrate pollution is a statewide problem.

• Bonness said that a resolution was sent to the DNR to continue monitoring the Ahnapee River during the two-year drawdown of the Forestville Millpond in Door County, which begins Nov. 1. The timing of the drawdown was partially set on the end of a DNR TMDL (total maximum daily load) study of sediment, phosphorus and nitrogen the DNR has been conducting.

“We want them to continue that testing,” she said.

• Bonness reported that 90 percent of the county’s septic systems have been inspected and are in compliance. Luft commented that, in comparison, there are counties in the state where compliance is less than 50 percent.

• A well-testing program will be held in the county, with test kits available for pickup Oct. 21. The program is limited to 150 privately owned wells, and Bonness said in just the first week, 20 homeowners had applied. There are several packages, including the homeowner package that tests for bacteria, nitrate, alkalinity, chloride, conductivity, corrosivity index, hardness and pH for $52; a metals package for $49; an herbicide package for $30; or all three for $123. Homeowners can drop off or mail a check to Kewaunee County Land & Water Conservation Department, 6256 Third St., Luxemburg, WI 54217. Include a phone number, the package you are registering for and an email address for future notices.