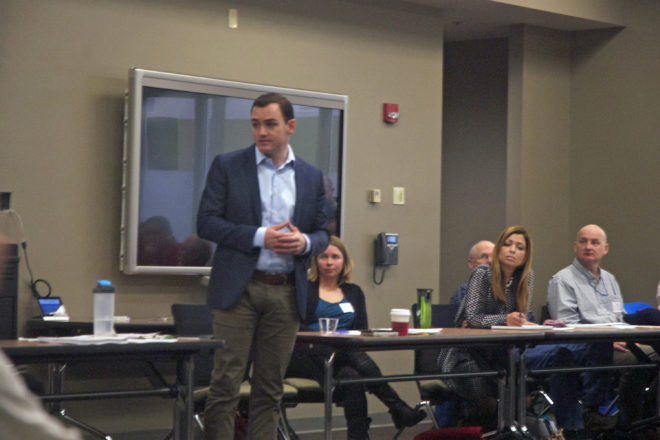 Congressman Mike Gallagher convened his first Save the Bay meeting on Feb. 21 at the NWTC Green Bay campus. Photo by Jim Lundstrom.

Congressman Mike Gallagher convened his first Save the Bay meeting on Feb. 21 by asking everyone to check their politics at the door.

“This is a group of people that isn’t interested in pointing fingers at each other or blaming someone else for the problem, but instead is motivated by a desire to come together and to listen to the facts and science and figure out how we can work together to fix the problem,” Gallagher said in his introduction to the meeting at the NWTC Green Bay campus.

Assembled in the room were a wide array of agricultural and environmental experts from government agencies, businesses and nonprofits throughout northeastern Wisconsin, all of whom have an interest in fixing the dead zone in the bay of Green Bay.

Everyone knows what caused the dead zone – or hypoxia (oxygen deficiency) – in a large section of the bay: Too many nutrients from a variety of sources, with agriculture being the main source throughout the watershed (79 percent, one attendee stated), followed by stormwater runoff.

One of those in attendance was 1st District Assemblyman Joel Kitchens, who commented that this Save the Bay initiative will be former Congressman Reid Ribble’s legacy.

Gallagher, who won the 8th District Congressional seat in the November election after Reid Ribble decided three terms in Washington was all he could handle, told the group he is dedicated to continuing Ribble’s work.

“How can we take this to the next step?” he asked. “What do you need from me and my team to help you out in your efforts? That’s really the focus of today.”

He then had everyone introduce themself and give the group any updates from their representative organizations. Farmers talked about investing more in cover crops that help prevent soil erosion into the watershed and other best management practices. Agency representatives talked about seeing small success stories every day in their particular fields. And nonprofits seemed to take a leading role in making things happen and being, in some cases, the conduit to the larger public.

While it was refreshing to hear so much good news in the fight to stop nutrient overloading of our waters, more than one of the attendees warned that there is still a long way to go. Some of it is institutional change, some is cultural change, some is generational change. They all take time.

In essence, this was an organizational meeting that comes with a change in leadership. The group came up with a vision and mission statement, provided by Nicole Van Helden, director of The Nature Conservancy’s Green Bay Watershed Project. Ideas were tossed out about what needed to be done. They talked about being more media savvy with the successes they are having, and about promoting their individual events among all the groups represented, and about lobbying in Washington. Gallagher thought that was a great idea and suggested they choose a day to go to Washington en masse to buttonhole lawmakers.

Asked by Gallagher to say something, Kitchens said determining total maximum daily loads of pollutants of the waters of the Lake Michigan shoreline communities is necessary, along with reduction of nutrient loads in tributaries. He added that many of the things he would have said had already been spoken by others, from spreading the word of successes through the media to attacking root causes of pollution.

Kitchens also suggested to Gallagher that his presence would be magnetic for any event held to promote the work of the organization or any of its partners, and that he might be able to expand the base of participating farmers by sending out personal invitations. Gallagher said he was in.

In short, Gallagher gave the impression that he is enjoying his job, and seemed eager to roll up his sleeves working with this coalition of local activists, scientists, government officials, agency heads and progressive farmers to solve water quality issues in northeastern Wisconsin. All in that large room seemed in sync on the issue of doing their part to save the bay, which really amounts to saving the entire watershed.

Gallagher ended the meeting by encouraging all in attendance to think creatively in advancing the cause of water quality.

Read about some of the Green Bay watershed success stories in the spring issue of Door County Living.