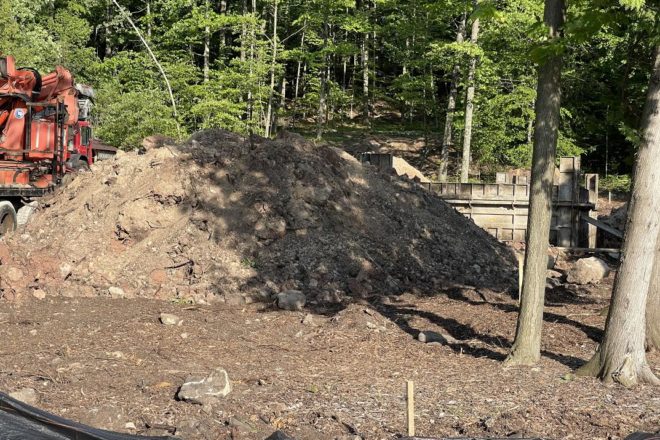 Building materials are in high demand as a higher-than-normal level of construction activity continues across the country, including in Door County. Photo by D.A. Fitzgerald.

Sturgeon Bay Mayor David Ward said 2021 is shaping up to be a strong year for new-home building in his city.

“In a typical year – in the entire year – seven or eight housing starts would be a pretty good year,” he said. “So it’s been at a very low level. As I’m driving around the city and keeping track of this, we’re already at that number or a little higher. ”

City zoning administrator Christopher Sullivan-Robinson confirmed the mayor’s observations. Although most of the new-home permits are approved between May and July, Sullivan-Robinson said he’s already approved more than usual to date: seven single-family residential building permits, with one pending and one more on the way. By comparison, Sturgeon Bay saw six new residential builds in all of 2020, and 10 in 2019.

It’s a similar story throughout the county. Brett Temme of Door County Inspections is a building inspector who works with seven county municipalities.

“Last year was actually a very busy spring – probably more than the year before,” Temme said. “This spring has been even busier than last year.”

Construction activity can ebb and flow with the seasons, he said, which would affect permit requests, but he’s seen a high volume of work so far in 2021.

“We’re over 50% of the new-home permits that we’ve issued this year already compared to last year,” he said.

Among the municipalities he works with, Temme said new-home construction is off to a good start within the towns of Sevastopol and Egg Harbor. The Town of Egg Harbor has 12 housing starts so far this year (January – May 27), compared to 15 in all of 2020 and 17 in 2019.

“I have got more work to be bid now than I have ever done in the 35 years I’ve been in this office,“ said Jeff Dorner, designer and estimator at Van’s Lumber and Custom Builders.

The pandemic seemed to kick-start the construction craze.

“About two weeks after the shutdown last March, we started getting phone calls from people wanting to upgrade this and change that, and it has not stopped,” he said.

As of the end of May, Van’s had 83 current projects in its system, both remodeling and new construction – more than the company has had in years.

The Frawleys have been planning to retire in Door County but hadn’t been in a hurry to build until COVID-19 caused them to reconsider their timeline.

“We were going to wait a couple years to build,” Kristin said, “but then we started talking about it and just said, ‘If I have the opportunity to work remotely, and John can work from anywhere, it just didn’t make sense to wait.’”

The Frawleys originally thought they would finalize home plans last winter, be well into the building process by now, and have a finished, move-in-ready home by Thanksgiving of this year.

“That’s the timeline we were on until we came to a screeching halt three weeks ago when we got the costs back,” Kristin said.

She said that their septic-system quote is double what they had originally planned, and the square-footage price of the home has increased significantly.

Dorner said the Frawleys, who are not Van’s customers, are experiencing a situation that is not unusual. The cost of building materials has tripled during the past year. Much has been written about the high cost of lumber, but the price of OSB products – what consumers might know as wall sheeting – is up, too.

And it’s not only high prices, but limited supplies and longer wait times that Dorner said are affecting his business. A mill in Michigan that usually sells him as much lumber as he wants, for example, now limits what he can buy. Unable to get all the lumber it needs from wholesalers, Van’s is buying on the open market and even got a shipment from Europe: the first time in Dorner’s career that he’s known that to happen.

“It was here in the country, and in order to keep things rolling, we just bought,” Dorner said.

Other materials aren’t available at all.

He explained that if it’s not available, or it’s going to take too long, customers must change their color choice or wait.

The materials-supply challenge has increased the cost to build a new home, but labor costs – a major component of a construction project – have remained stable, Dorner said. That may be a small piece of good news for people trying to build.

“The labor hasn’t really changed a lot, so the overall price of a house hasn’t gone crazy,” Dorner said. “It’s gone up, but it hasn’t tripled in cost.”