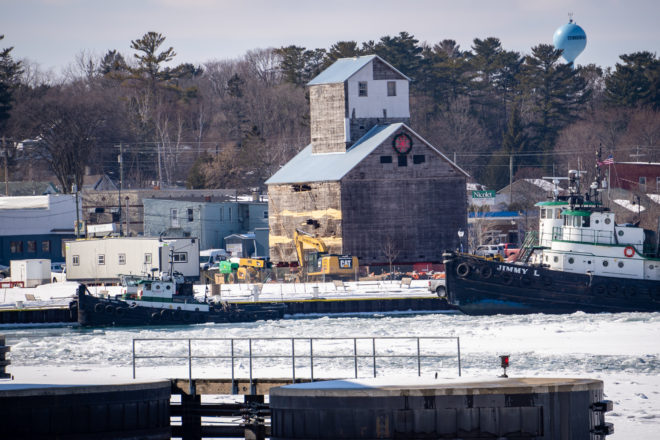 It took a day moving at a roller’s pace, but on April 9, the Teweles and Brandeis granary building ended up in the exact spot where it began in 1901 on Sturgeon Bay’s West Waterfront. Photo by Rachel Lukas.

Restoration of the Teweles and Brandeis grain elevator on Sturgeon Bay’s West Waterfront hasn’t been immune to delays in obtaining construction materials following the onset of the COVID-19 pandemic.

Therefore, the Sturgeon Bay Common Council agreed May 3 to conditionally approve an 11-month extension in the development agreement between the city and the Sturgeon Bay Historical Society Foundation (SBHSF) for when the Door County Granary project must be “substantially completed,” changing the deadline from June 1 of this year to no later than April 30, 2023.

The agreement’s now-third amendment defines “substantial completion” as the point at which “an occupancy or other appropriate use permit has been issued by the city.” Final “punch list” items such as landscaping would not prevent the permit from being issued.

The council’s motion was approved on a voice vote, with the lone dissent coming from District 7 Alder Kirsten Reeths.

The Granary project’s executive director, Beth Renstrom, appeared before the council to request the extension and discussed current support for the renovation effort from community businesses.

“We’ve also got letters of support from Destination Door County and Destination Sturgeon Bay that they really see this as something that significantly adds value to our community as an attraction,” she said.

Renstrom said the project now faces a “bump in the road” with the current supply-chain delays.

“Some of the things we’ve talked about were the electric panels and windows – those are two of the big ones,” she said. “We know we’re not unique in this. There are other projects that are experiencing those same delays and an inability to get materials.”

Reeths – first elected to the council in April 2019, when the Granary project was a contentious issue, after outpolling then-incumbent Laurel Hauser by three votes – said she isn’t against the Granary and what it has become.

But Reeths also voiced her preference that the project should have been located at the Door County Valmy Thresheree instead “because I believe the true history and the location can be seen and told there. If this vision, from the beginning, was given a plan from the start, instead of fighting and secretness, many people might feel differently about the Granary,” she said.

City Administrator Josh VanLieshout said the SBHSF will have no later than 60 days from the date of the third amendment’s approval to provide the council with copies of order documents for construction items requiring a long lead time to obtain, such as windows, doors and electrical components.

Starting June 1 and ending next April, he said the SBHSF will be required to provide monthly updates on the Granary project at one of the council’s regularly scheduled twice-per-month meetings.

VanLieshout said an updated project-construction schedule and list of project milestones completed the previous month will also be provided by the SBHSF “to help the city and council and public track progress on the site.”

“A project like this is not always visible [as to] what’s happening,” he said.

District 5 Alder Gary Nault said he’s received phone calls from people complaining about what they see as a lack of progress with the Granary project.

“When things don’t happen – and we’ve talked about this – the natives in the city start to rumble and start to say, ‘Well, the money isn’t there,’ and things like that,” he said. “I think this is really important that we get this right.”

The money is there, according to Bret Bicoy, president and CEO of the Door County Community Foundation, who sent a letter to Mayor David Ward in support of the Granary project’s fundraising efforts.

“Further, to our knowledge, the Historical Society is current with all its financial obligations to its contractors,” Bicoy said. “In summary, I’m pleased to report that the campaign is progressing in a manner typical of any effort of this size, and consequently we continue to believe that with continued focus and hard work, the Campaign Leadership Team will be able to realize their goal.”

Renstrom said the Granary project has worked with Greenfire to put together a plan to renovate the building while facing the supply-chain delays.

“We are hopeful with the materials that we know that are coming,” she said. “We are going to be going through the project. We are going to be ordering the long-lead-time materials, and based on the [development] agreement, providing the city with that information, and then coming and updating you guys [on the council] every month as to where things are at.”