The Door County Board of Supervisors will consider a resolution calling for a non-binding state referendum seeking to overturn the 2010 Citizens United U.S. Supreme Court decision concerning campaign finance at its meeting on Feb. 27. The Legislative Committee forwarded the resolution on Feb. 13, insisting it is apolitical. But the committee still expects vigorous debate at the county board level.

“We’re going to have to be able to answer questions as to what our thinking process was to put this forward,” said Susan Kohout, chair of the committee.

County Administrator Ken Pabich said he expects a debate, citing conversations with some county board members on the intent of the resolution.

County Supervisor Linda Wait attended the committee meeting and cautioned about the board commenting on what could be perceived as a partisan issue.

“I just want to make sure that, if this does go to the county board, that we are portraying ourselves as neutral representatives on behalf of our constituents,” Wait said. “We need to stress that nonpartisan point of view.”

Dan Powers and Jim Black of the campaign finance reform group United to Amend insist the measure is nonpartisan.

Citizens United gave certain rights to corporations, nonprofits and other groups, equating money to free speech and removing limits on how much these entities can spend on political campaigns.

“[Citizens United] diminishes the vote for the individual no matter what party they’re on,” Black said.

Powers added that the goal is not necessarily to limit campaign contributions, but simply give Congress the power to impose regulations if they want to, which the legislative body can’t do under the Supreme Court decision.

Powers and Black hoped for a countywide referendum on the issue, which the Legislative Committee may still pursue.

If the resolution passes the county board, it will be sent to the Wisconsin Counties Association (WCA) in the hope the organization will add the issue to their agenda, although Kohout is not confident.

“While it would be part of their platform it’s probably not something at this point that they are going to spend a lot of their resources on,” said Kohout of her conversation with a WCA lobbyist.

The National Oceanic and Atmospheric Administration (NOAA) is pursuing designation of a marine sanctuary along Lake Michigan’s western shore in Wisconsin. The proposal includes Ozaukee, Sheboygan and Manitowoc counties, while Kewaunee County is being considered as an addition.

Although Door County is not officially being considered as part of the sanctuary, Sulynn Moore of Manitowoc is trying to get out ahead of an expected expansion, asking the Legislative Committee and county board to oppose the sanctuary on the grounds of federal overreach.

“It’s an issue of sovereignty,” Moore said. “If it goes through, they’re coming after you. They will.”

A National Marine Sanctuary is a federally designated area protecting marine environments that possess some historic, environmental, archaeological or scientific value. The designation opens the area to some federal and research funding, as well as potential tourism. A sanctuary designated in Lake Huron has a visitor center in Alpena, Michigan, citing 70,000 annual visitors to the city of 10,000 residents. 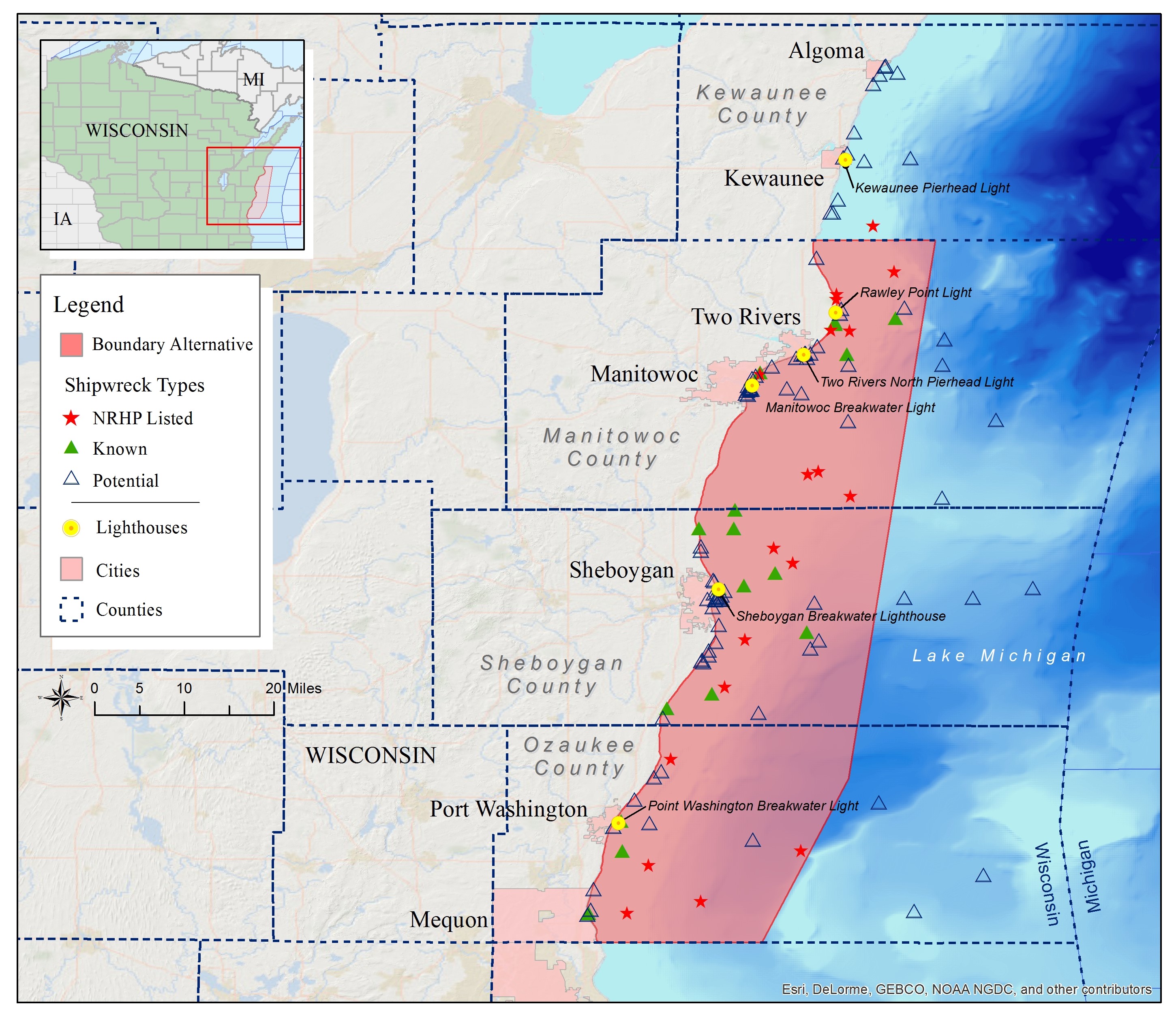 The proposed marine sanctuary in Lake Michigan would encompass 1,075 square miles of water off of Ozaukee, Sheboygan and Manitowoc counties, with a proposed expansion into Kewaunee County. The area contains 37 known shipwrecks with an estimated 80 additional shipwrecks that have not been discovered.

Moore and a group of dedicated opposition are concerned the designation would infringe on property owners and the sovereignty of Wisconsin.

“For me, being a small government person, it is onerous to turn something over to the federal government,” Moore said.

Committee members recognized Moore’s opinion as just one side of the debate and questioned whether the county should prematurely get involved in the issue through a resolution. Moore claimed the Thunder Bay National Marine Sanctuary in Lake Huron has affected property rights and local industries, but could not provide any specific examples to support that statement.

The primary role of the sanctuary in Lake Huron has been to discover and preserve shipwrecks, which Moore believes is unnecessary.

“NOAA is promising to protect shipwrecks which are really deep and cold in Lake Michigan,” Moore said. “They can’t see them. There’s one tenth of people that dive in this country.”

Regulations imposed on sanctuaries are specific to each site. The primary purpose of the Thunder Bay sanctuary is to preserve shipwrecks, which still allows for many industries, including fisheries, to operate. The proposed sanctuary in Lake Michigan is expected to carry similar shipwreck-specific regulations.

More than 200 shipwrecks lie in the Thunder Bay sanctuary. Since 2005, the sanctuary has received approximately $840,000 in funds to research and archive the wrecks.

But committee members wondered what the climate for funding is like under the current federal administration.

“How can [the federal government] add on another place to take care of?” said committee member Dave Enigl. “We don’t live in a climate right now that a higher level of government is going to do our citizens any better.”

President Donald Trump signed an executive order in April 2017 that limits designation and expansion of any marine sanctuaries. While the move has slowed the process for the sanctuary proposed in Lake Michigan, advocates and opponents say the executive order has not stopped it.

Committee members do not plan on making a formal resolution or statement on the issue but will watch for any new developments.