At a recent Buy Local event held by the Door County Economic Development Corporation at the Door County Brewery Co. in Baileys Harbor, brewery founder John McMahon explained that the whole idea of starting a brewery was to bring his family back together after he and his wife Angie watched their two sons, Danny and Ben, move from Door County for better opportunities.

“They decided they had to leave when college came and they could never come back because there weren’t real jobs,” John told the Buy Local audience. 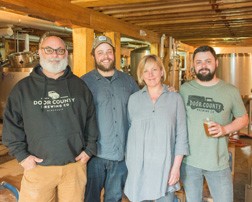 When oldest son Danny graduated from Hamline University in St. Paul, he was homebrewing and bringing his homemade beer back when he visited Door County.

“My wife and I were sitting around one day, talking about how do we bring our family back,” he said. “It occurred to us to start a brewery and entice them to come home.”

While that may sound like an act of desperation by parents missing their children, in this case it turned out to be a wise business move, with all four family members now contributing their individual expertise to make the business work.

The family started putting the elements together in 2012, and in 2013 Danny’s first commercial beers were released. In May 2014, the family opened the tap room in a former grain mill/grocery store in Baileys Harbor, and along the way they have garnered accolades, such as the recent People’s Choice Award for the Silurian Milk Stout at the 2015 St. Paul Summer Beer Fest, or being the first brewery to win Best of Show two years in a row at the Green Bay Firkin Fest. These are the things that cause beer fans to not only seek out the beer but also make the brewery a destination.

“It is amazing growth,” said Brian Flanigan, president of Flanigan Distributing in Sturgeon Bay, local distributor for Door County Brewing. “They’ve now become our No. 1 craft beer supplier, overtaking New Glarus, which is the third or fourth largest craft brewer in the country. We still have really good sales with New Glarus but it’s phenomenal the support the locals are giving Door County Brewing. That really speaks to Danny’s ability to brew beer. He’s got a really good palate, and I like that he’s not trying to do something that’s going to please everybody, but what he wants and what he thinks is good. Tough skin is needed not to make another West Coast IPA. In my 15 years of running Flanigan Distributing and my lifetime of being in the beer business, I’ve never seen anybody come out with an oatmeal pale ale (Door County Brewing’s Bare Bottom Pale Ale was released in the spring).”

Another way to measure success is beer production.

“By April of this year we had made as much beer as we had made all of last year,” Danny said. “Hopefully, that’s the case next year.” 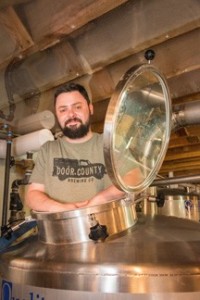 Danny McMahon is head brewer and, along with John, responsible for distribution.

“We have a good family,” John said. “To think that the four elements we needed to make this work, they were all here. We were lucky that it was already here in the family.”

He explained that he and Danny are responsible for distribution of the beer, while Angie and younger son Ben are in charge of the tap room and making it a destination.

“The biggest challenge was to figure out where we all fit into the business, where are talents are and how we can put them to use,” said Angie. “We almost killed each other trying to figure it out, but it has all worked out nicely.”

“The most exciting part for me is the music that goes on here, that I had an opportunity to bring in some fantastic bands that probably would have never considered coming to Door County to play music,” Ben said. “Everybody’s loved it, and most call me in the next few weeks to do it again.

“It’s quite a lovely place to work. People are drinking good beer and are happy,” Angie said. 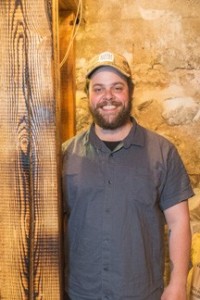 Ben, along with Angie, is in charge of the tap room.

“What we’re all about is creating community,” John said. “The things we do here are unique. We don’t have any TVs. We never will have TVs.”

When a customer once asked John why there are no televisions in the tap room, John responded with, “You’re talking to your friend. Why are you asking me about a TV?”

A few minutes later the guy grabbed John by the arm as he was passing and said, “Thank you for pointing that out to me. You were right and I was wrong.”

“And two hours later,” John said, “he and his friend left with the couple they were talking to. They had just met that day. We have that happen all the time. This place is louder than a bar with televisions because there are people talking and enjoying themselves. We do that on purpose. This brewery is to bring our community together.”

Expansion plans for a full brewery at the corner of County EE and F are already under way. In the meantime, Door County Brewing Co. beers are being contract brewed under Danny’s supervision at Sand Creek Brewery in Black River Falls, Wis., which means that with supervising beers and helping to spread the word about the beer by traveling to festivals and other events around the state, Danny has put on a lot of miles.

“I’ll be excited when I don’t have to go to Sand Creek to brew, but we wouldn’t be here without their help,” Danny said. “Between that and festivals, I bought a new car in Sept. with 200 miles and it’s got 25,000 miles on it now. It’s a lot of traveling. That’s what we need to do.”

He admits the past two years have flown by. “Things are moving fast,” Danny said. “This is not quite what we expected, and I mean that in a good way. This space exceeded all our expectations. We get a lot of people from out of town saying it’s their favorite place to stop.”

The brewery also recently announced its first full-time hire. Peter Kerwin, recently retired as the chief financial officer of Marine Travelift in Sturgeon Bay, has been hired as CFO and director of operations for Door County Brewing Co.

“That’s a really big move for us to have someone of his caliber in the role,” John said. “The demands of the business have grown so much and with plans for expansion, we had to have a full-time person in finance and head of operations to come in and take the work load off us. We’re really excited about that.”