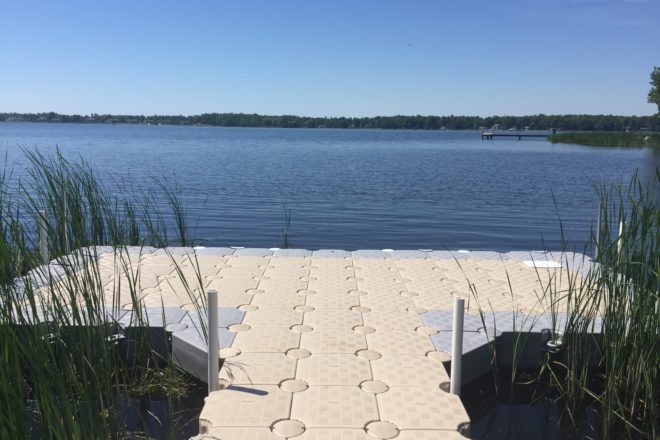 The observation point at the end of Crossroads’ new floating dock. Photo by Andrea Nelson.

In June, Brian Wake, president of the Friends of Crossroads at Big Creek (Friends), and his wife were taking a guided tour through the Big Creek Cove preserve with their four grandchildren and their dog, Sophie. They stood at the edge of a floating dock, their eyes scanning the water for the fish that frequently swim in the shallow waters.

“Oh, over here is my favorite bug!” Coggin Heeringa, Director of Crossroads at Big Creek, exclaimed, waving the three oldest girls over to where she stood closer to shore. She pointed to a trio of tiny insects skirting along the surface of the water. “These things are called whirligig beetles, and they go around in circles; that’s why they’re called whirligigs. And they never bump into each other. For hundreds of years scientists wondered why they didn’t bump into each other. And then when we invented sonar, we realized they have a sonar-type sense.”

Heeringa is full of miniature nature lessons such as this one. From the buttercups and hawkweed that bloom in early summer to a tiny snail attached to the stalk of a cattail, Heeringa has a fun fact or a historical detail for most of the plants and animals encountered on the trail. Now, with the recent installation of the preserve’s new floating dock, she’s able to take her lessons out onto the water. 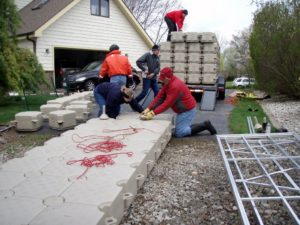 The Friends assemble part of the floating dock. Submitted.

The dock makes it easier to get out beyond the cattails lining the cove and encounter open water, but getting it there in the first place took a considerable effort from the Friends. The Big Creek Cove property is largely wetlands, so transporting the dock by land was out of the question.

“The dock was delivered on a semi. There was no way we could drive it down there,” Heeringa said.

According to Wake, the solution was to approach the desired spot from the other direction. A neighbor with access to the cove offered to let the Friends use their property as a staging ground for the project.

The dock arrived as individual plastic blocks, each slightly more than one-foot square. These were accompanied by plastic-capped screws, which would hold the blocks together.

The dock was constructed in two pieces and then towed across the cove using a small boat. At the moment the dock is secured with piping, but Crossroads plans to install more stabilizers to reduce the structure’s tendency to undulate under visitors’ feet.

Crossroads expects the dock to serve a multitude of purposes. A work surface for lessons and research, a place to watch the Tall Ship Festival parade, and a canoe and kayak landing are among the uses Heeringa listed as she led her small band of explorers back to shore.

In addition to the dock, Crossroads installed a new wooden observation deck that raises visitors above the tall rushes to see views of the cove and the preserve.

“We had donations for the dock; we came in slightly under budget,” explained Heeringa as she sat on one of the deck’s benches. “And so Rich [Propsom, Crossroads’ land manager,] says, ‘Can I make this observation deck?’ and I said, ‘Yeah, as long as you don’t go over the budget.’” 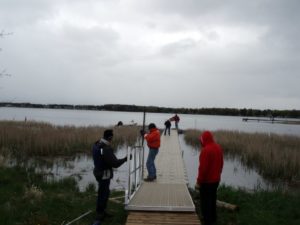 The two pieces of the dock are assembled at its final destination. Submitted.

The construction of the entire deck project, according to Heeringa, cost a mere two dollars and eighty-five cents. Propsom used the frame from the property’s old dock whose decking had floated away, along with salvaged lumber and nails to create the new structure.

These projects have come to a close but that doesn’t mean Crossroads has stopped working at their new property. An archaeological survey revealed findings at 10 of 12 test sites across the property. So far the dig has uncovered pottery, fish scales and bones, mammal bones, points and boiling stones.

“Probably about 2,000 years ago this would have been an Indian village,” Heeringa said. “Maybe not a year-round village. We think it was like a summer fishing camp.”

Citizen Science in Archaeology plans to visit the property in the fall. Heeringa said Crossroads will invite all of the area schools to be a part of the project.

“Last year we had the sixth grade from Sturgeon [Bay] out for four days solid and they dug, they did soil tests, they cleaned the stuff, they sorted the stuff, they had mapping demonstrations. It was very cool,” she said. “We’re going to do it every year.”