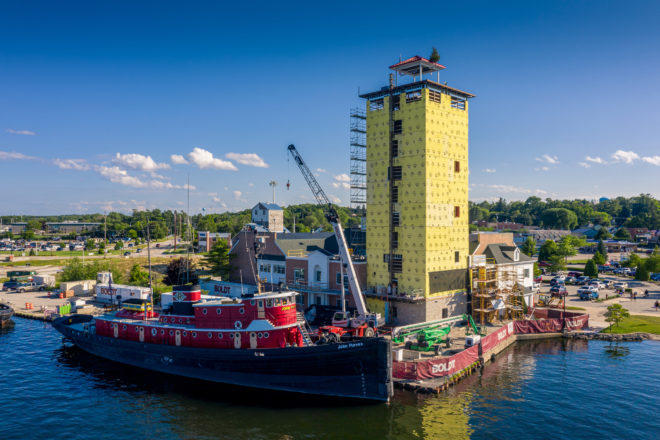 The tug John Puves is tied to the dock at the Door County Maritime Museum where the Lighthouse Tower project rises above the West Waterfront redevelopment site. Photo by Brett Kosmider.

The pace of construction on the Door County Maritime Museum’s (DCMM) Lighthouse Observation Tower has been steady-as-she-goes since the ceremonial groundbreaking for the 10-story tower in November.

The structure will have indoor and outdoor observation decks atop it and community event space on the second floor. Each of the floors in between will be dedicated to educational experiences that present and interpret various aspects of the county’s maritime history.

The estimated construction cost is $5.5 million, and the project is about $1 million away from reaching that goal, according to Kevin Osgood, DCMM executive director.

“We are also fundraising for the exhibits, which could be in excess of $2 million,” he said.

Construction is expected to be completed in December, with the anticipated opening of at least floors one, two and 10 on May 1, 2021, Osgood said.