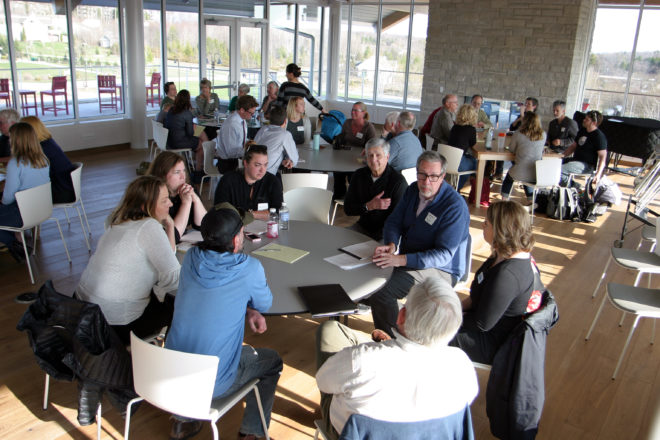 Group discussions on housing issues were part of the process in a meeting convened by the Door County Economic Development Corp. at the Kress Pavilion in Egg Harbor on March 3. Photo by Jim Lundstrom.

The shortage of affordable year-round housing and seasonal worker housing that plagues the peninsula has been fretted about and discussed at many levels, but, finally, a study is underway that hopes to present some solutions.

On May 3 the Door County Economic Development Corp. (DCEDC) convened a public meeting at the Kress Pavilion in Egg Harbor, where Chris Brewer, vice president of economics and advisory for the engineering firm AECOM, gave an outline of the project. AECOM was hired to conduct the housing study.

Brewer pointed out that although the study is in its very early stages, preliminary discussions have highlighted the missing housing stock due to the unique way the county developed. This study will be data driven, he said, based on information gathered from stakeholders.

He also recognized that Door County has both year-round and seasonal housing shortages, especially starter homes for those earning $30,000 to $40,000 a year.

The 40 attendees were broken down into smaller groups, where some of these housing issues were raised:

Other discussion looked at who will lead the housing effort in the future, and a suggestion to use room or sales taxes for seasonal workforce housing.

Brewer said the whole study will take two to three months. They will continue to conduct interviews and come back with a report on the existing housing stock, as well as identifying some possible solutions to the housing shortage.

In a statement issued by the DCEDC, Brewer said, “There will not be one solution that responds to Door County’s housing challenges. A variety of ideas will need to be studied, regulatory policies or codes may need to be revisited, and the community – residents, business owners, workers, and government officials – will likely need to work together to implement changes and spur development.”