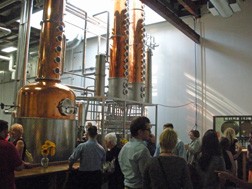 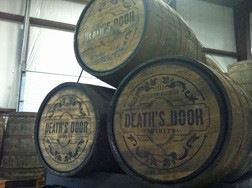 When Brian Ellison cut the ribbon on Death’s Door Distillery’s new Middleton, Wis. facility June 4, he stepped the craft distillery deeper into the sustainable ethic at the heart of the company.

Though the gleaming, $3.3 million, 25,000 square-foot distillery is the largest in the state, Ellison insists that the growth of his company doesn’t indicate a move away from the mission to create an exceptional, sustainable Wisconsin product that it was founded on.

The story of the spirit’s origins is now familiar. In 2005 Ellison was working for Brian Vandewalle’s land planning firm, Vandewalle & Associates, which owned the Washington Hotel on Washington Island. Vandewalle and Ellison sought to carve out a niche for eco-tourism on the island.

“My background was in eco-tourism development,” Ellison said, “and we set out to create that attraction on the island. But we also needed to bring something off the island so people could relate to it.” 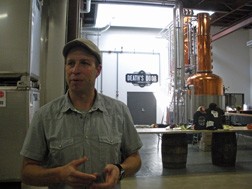 Brian Ellison marketed his Death’s Door Spirits by driving cases into the city of Chicago and Milwaukee in the back of his Volvo station wagon. He opened a gleaming new 25,000 square-foot facility June 4.

They started by working with Washington Island farmers Tom and Ken Koyen to grow five acres of wheat to make artisanal breads, but scratched the plan after a year.

“We weren’t going to get anywhere with that,” Ellison said.

They turned to beer and spirits, with Ellison helping Capital Brewery create Washington Island Wheat Beer. Then Ellison struck out on his own to create Death’s Door Spirits, makers of Vodka and Gin, using the Koyen’s wheat as well.

In 2007 he shipped 750 cases. This year he expects to ship 40,000 as the spirits, particularly the gin, have earned a reputation as some of the best in the country. In 2008 Ellison added a groundbreaking white whisky to the mix, and eventually he hopes to move more than 200,000 cases annually.

But as he grows he keeps his focus on sustainable practices, and that starts with sourcing his ingredients in Wisconsin.

Ellison has worked hard to create an authentic connection to Door County. In addition to the 1,200 acres of certified organic red winter wheat now grown on the island, he uses wild juniper berries from the island in his gin. Ellison has visions of a visitor center for Death’s Door Spirits on the island as well.

“I think sometimes people in Door County are skeptical of people using the brand on products,” he said. “We really try to make sure people recognize our commitment to the island.” 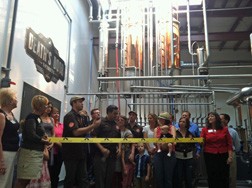 Death’s Door Spirits remains committed to its sustainable ethos, from its sourcing of wheat from Washington Island to state-of-the-art, high-efficiency boilers installed in its new facility, to donating 1 percent of sales to the Alliance for the Great Lakes.

He sources barley from an organic farm in Chilton, and the grains are milled at the Pounder Brothers Farm, a certified organic grain storing facility and mill in Delevan, Wis. Pounder Brothers custom blends the wheat with the barley, and when they deliver the blend they pick up the silage – the mash left over after the alcohol is stripped from it – from the distillery to bring home to feed to their certified angus beef cattle.

Ellison also invested in new technology and design specifications to further ingrain his green goals into the 25,000 square-foot distillery’s processes.

Two state-of-the-art, hospital-grade boilers are used to heat the stills. They’re the highest efficiency boilers available, according to Director of Operations Mike Reiber, and he’ll tell you all about them if you take a tour (seriously, he loves these boilers like most men love their car).

The 50-gallon reservoirs heat up faster than the more common 100-gallon models, and their compact design allowed the facility to function in a much smaller footprint than other boilers would allow. The boilers earned Death’s Door $8,400 in Focus on Energy funds from Wisconsin Public Service.

A reverse osmosis water system re-uses the 170-degree water that comes off the still condenser, cutting down on both heating and boiler maintenance costs, while the fermenter pumps are hydraulic rather than electric to reduce the amount of energy used to cycle the mash.

When the product is sold, 1 percent of revenues goes to the Alliance for the Great Lakes for preservation efforts.

The high-tech facility may sit on the outskirts of Madison, but Ellison says the brand’s name – and its connection to Door County – remains vital to its growth.

“The wheat we grow on the island has a sweetness and a maltiness we can’t get from any other wheat,” he said. “We have an exceptional product, but it’s also a good, honest story with integrity.”

For the rest of Door County, it’s great organic marketing. Death’s Door spirits are now found on the top shelves of the best restaurants and craft cocktail bars in the Midwest, and increasingly, the country (California is its number two market after Wisconsin).

When the Death’s Door bottle comes off the shelf, the story behind the name usually isn’t too far behind.