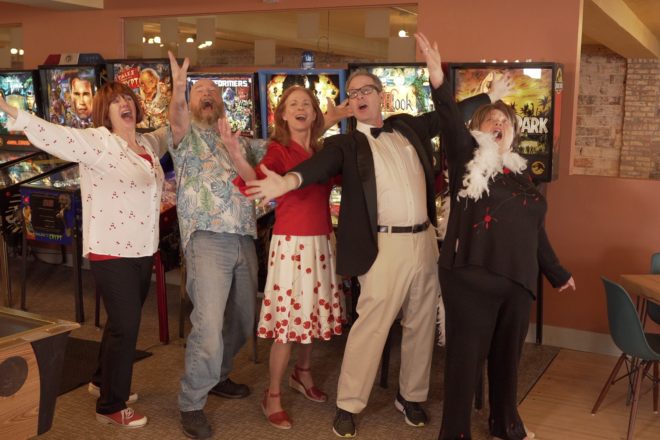 The Door County Comedy Channel on YouTube is officially live thanks to the members of the improv comedy troupe Door County Knockers.

The Knockers began as a way to encourage play when founder Ross Dippel sent out an open invitation in April 2018 to anyone interested in joining in the interactive fun. “The original thought was that we could get a group together to practice improv, which would eventually lead to a performance troupe,” Dippel said, “but we learned that’s not really what we wanted to do.”

During the past year of meeting, the group has enjoyed creating a fun, playful space to practice sketch comedy and improv techniques without pressure. Rather than focus on the performance aspect, they decided the best way to share their creativity with the masses would be through a digital route. Thus was born the Door County Comedy Channel.

“The YouTube channel is a place where we will put our improv and music videos as a way to share them in a more laid-back way,” Dippel said.

The channel’s first video is An Invitation – both in title and in the literal sense. Dippel, who holds a master’s degree from the Shakespeare Theatre Company’s Academy for Classical Acting in Washington, D.C., speaks through the camera to viewers, inviting them to play. “To play or not to play, that is the question,” he begins, and he goes on to share the reasons why the troupe began.

“To play, find joy, create new friendships where none were before,” Dippel explains in the video. “There’s the respect that makes play integral to a long and happy life, for who would bear the whips and scores of time, the rich man’s wrongs, the ceaseless cacophony of cable news, the seductive whirlpool of destructive thought without the soothing balm of a stranger’s laugh? An invitation to a new being, an understanding that we are not different.”

The group now has a handful of regular players, but it’s always looking for more members. Dippel began the group targeting those aged 50 and older, but he’s since relaxed that objective. Members gather twice weekly: on Sunday evenings at a member’s home and on Wednesday evenings in the space below the Margaret Lockwood Gallery, called the Inside Out Space.

Gallery owners Allin Walker and Margaret Lockwood have opened the space to the community and to the Knockers with the intention to serve as an arts incubator. “Death’s Door Knockers is deeply grateful and proud to be a small part of the larger creative Renaissance that is taking place in Sturgeon Bay,” Dippel said.

On May 17, the group made its video debut with a music video for an original song called “Boomers Keep on Rockin’” – a humorous take on life as we grow older – that touches on bad vision, failing memory, hot flashes and the like. Shot at Cherry Lanes in Sturgeon Bay, the video is a musical sing-along that will have you crooning, “Boomers keep on rockin’; we ain’t done with the fun!”

The larger goal of the YouTube channel is to host a web series that features ongoing characters developed and played by members. Some of these characters are already in the works, and without giving anything away, there’s a classic-rock DJ named Dr. Rock and a Yooper named Duper.

A portion of the group is also working on a puppet show, led by a scruffy character named Rugs and joined by Pinky, a pink lady puppet with no nose; and Herschel, a brown puppy puppet. The puppets – called the Door County Puppet Project – debuted a skit at a recent Knockers meeting that proved to be quite entertaining. “Door County has really needed a puppet presence,” agreed the troupe members. They plan to play to both children and adults.

The meetings start with casual life updates because, as member Jane put it, “We’ve all become quite good friends!” Then the group plays a round or two of improv games, challenging members to use their creative toolbox for spontaneous “Yes, and …” types of interactions. The aim is not necessarily to try to be funny, but to engage one another and have fun. “The reason I truly enjoy this group is because it really is fun. It’s revisiting that childhood frame of mind,” Dippel said.

Those interested in joining Death’s Door Knockers may visit the group’s Facebook page or email [email protected] to get more details about the troupe and its future meetings.