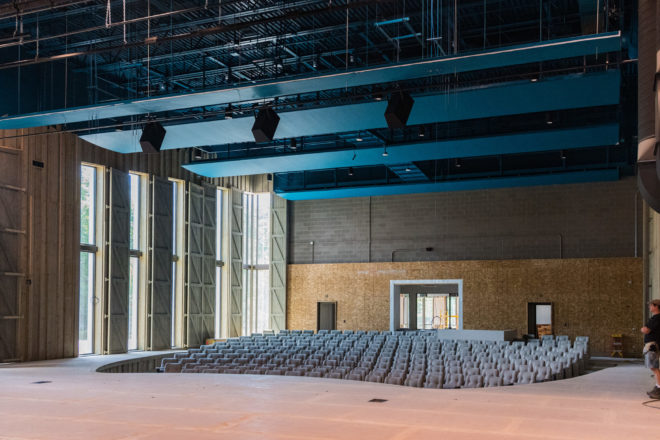 This pandemic has forced adaptation across the board for all businesses, but more often than not, the question has been one of safe product delivery.

Most businesses have been able to continue to produce their products relatively normally, but they’ve had to get creative about how they delivered them to their customers. Restaurants beefed up their online ordering and takeout options; grocery and other retail stores made it easier to get everything without even stepping inside the store; and other businesses moved into online spaces to provide adapted offerings.

Theater companies, on the other hand, had different questions to answer. For the performing arts, the question wasn’t just one of product delivery – it was also one of content production and, perhaps even more challenging, the integrity of the medium.

Is theater even theater if there’s no live audience?

This year, each theater company in Door County set out to answer these questions in its own way. Early on, Rogue Theater continued to perform live in parking lots drive-in style, but because most of the theaters in the county are members of Actors Equity, avenues for live performance became severely limited. Equity performances require approval, and very few shows were approved in 2020.

Many companies took to Zoom to put on readings – artistically reduced performances during which actors read directly from the script – which is a perfect medium for a type of theater that already lends itself to limited sets and scene direction.

Third Avenue Playhouse – in addition to its TAP Talks series of weekly interviews and discussion on theater hosted by Co-Artistic Directors Robert Boles and James Valcq – put on a virtual reading of The Gift of the Magi and streamed #ENOUGH: Plays to End Gun Violence with virtual talkbacks and accompanying material.

Door Shakespeare saw the Zoom trend as both a challenge and an opportunity.

“We made the decision that the one thing that we would like to show our folks who are coming to see the show virtually is a production: an actual production,” said Michael Stebbins, artistic director of Door Shakespeare. Rosalind was rehearsed, staged and performed with the use of Zoom, but it was filmed in the homes of the actors, all of whom received identical costumes, props and even sets. The result was a unique combination of theater, film and videoconferencing.

Peninsula Players answered the questions in a different way. One remote offering it embarked on this year was a deeper look into the 85 years of history that make up the Players story. Artistic Director Greg Vinkler used this season as a way to tell that story – something he may not have had time to do during a typical season of five back-to-back shows.

Beyond the question of delivering content to its audience, Peninsula Players also grappled with theatrical integrity and what makes theater, well, theater.

The Players partnered with Chicago Radio Theatre to produce The Murders in the Rue Morgue, a live audio production. In addition, it is currently running It Sounds Like a Christmas Carol: an original audio play directed, produced and edited by Neil Brookshire and presented by the theater.

A common throughline among all of the companies this year has been offering insights behind the scenes through artist interviews and a spotlight on the people who make each theater run. Northern Sky Theater shared its behind-the-scenes world through the weekly Jeff & Katie Show.

“The Jeff & Katie Show was a little like a talk show and variety show, with music and a special guest and a bake-off!” said Holly Feldman, director of development and public relations at Northern Sky.

Another virtual event came in the form of its Raise the Curtain fundraiser, which is normally held in May at the Alpine Resort. This event caps out at 200 people, but by going online this year, close to 450 households participated in some way.

“If you figure about two people per household, we would have broken all fire codes at the Alpine,” Feldman said.

Although the challenges were great this year, each theater company rose to meet those challenges in special ways. And though every company is eager to return to the stage, the final question that still remains is whether any of the adaptations these theater companies have tried are opportunities that are worthy of continued development during the new year and beyond. Both Northern Sky and Peninsula Players believe that their variety show and history series, respectively, may continue into 2021.

And so, as the curtains close on 2020 and we look ahead to 2021, Holly Feldman had this to say: “We are just glad we’ve been able to make the best of this extremely unusual situation we’ve been in all year. We have heard from so many folks who took the time to reach out and personally tell us that we’ve been that bright spot they needed. Hearing from our fans never gets old – we miss them as much as they miss us. Probably more.”