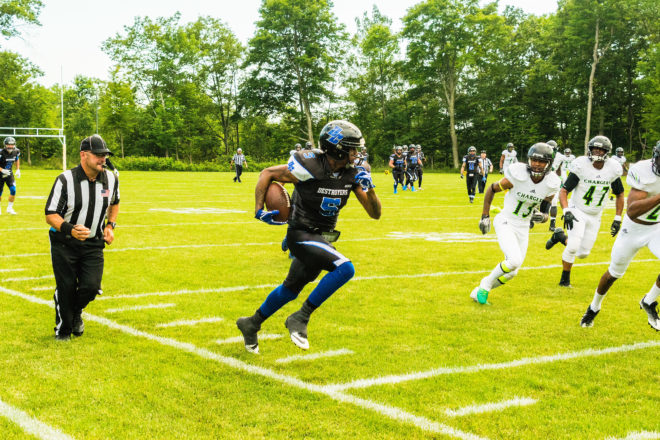 It was another tough loss for the Door County Destroyers football team as they lost by a narrow margin to the Chi City Ducks. At the June 9 game at the Destroyers’ home field in Baileys Harbor, the Destroyers lost 26-23.

Chi City led at halftime 20-9 but a second half comeback from the Destroyers put them with the ball with two minutes remaining and down three points. The Ducks defense stopped them on downs and took home the victory.

Standout performers for the Destroyers:  Carmelo Valazquez caught 3 passes for 72 yards and a 54-yard touchdown; Tyler Honeck led the defense with 6 tackles, 2 for loss, 1 fumble recovery, 1 deflection and 1 touchdown; Junior Blucher recorded 6 tackles, 1 for loss and 1 sack; and Donald Oliver intercepted 1 pass and had one deflection.

The Destroyers are on the road this weekend, June 16 as they face the Rock County Rage. Their next home game is June 30, 4 pm at the Baileys Harbor Rec Park against the Racine Raiders. For more information find the Door County Destroyers on Facebook.