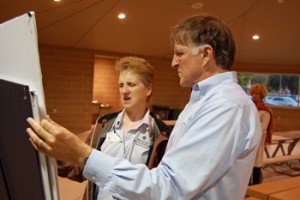 Dean Proctor of Vandewalle & Associates explains details of the west side development project in Sturgeon Bay to resident Deb Whitelaw-Gorski after a meeting held Oct. 2 to give the public opportunity to hear the development concept that the Madison firm has come up with for the 4.5-acre waterfront spot. Vandewalle & Associates has developed a reputation for working with coastal communities. Photo by Jim Lundstrom.

Taking advantage of what you’ve got was the theme of a public meeting held Oct. 2 in the waterfront Sawyer Park pavilion on a plan to create a cultural hub on 4 1/2 acres of west side waterfront land.

The land is on a shipping channel between the two bridges in downtown Sturgeon Bay, and also sandwiched between the U.S. Coast Guard and the Door County Maritime Museum.

With that in mind, the city went to the Madison design firm Vandewalle and Associates, which has built a reputation working with coastal communities.

The plan, as represented by Vandewalle representatives Jeff Maloney and Dean Proctor, incorporates the maritime theme in a multi-use development that includes public walkways, a fishing area, an indoor market, a housing development, boutique lodging, a pub/restaurant and a pier that originally was intended for festival use but is now being considered for commercial use as well, perhaps for the tugboats of Sturgeon Bay and the tall ships whenever the Tall Ships Festival returns.

“There is more chance of getting it funded if it has commercial use,” Maloney said at the meeting.

Sturgeon Bay Community Development Director Marty Olejniczak also attended the meeting and, responding to a question from the audience about funding for the project, said private development, hopefully to the tune of $16 million, would spur public efforts. He added that several businesses have expressed interest in being involved in the project and while it would be easier if one developer were to take over the project, “odds are it will be multiple developers.”

Audience member Anne Grunau of Sturgeon Bay seemed to sum up what most felt after hearing details of the plan:  “This is something really spectacular for Sturgeon Bay.”

See details of the plan here.