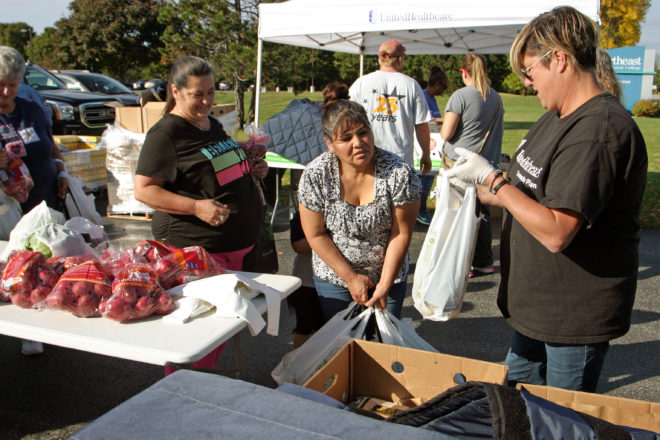 Beautiful cabbages bigger than your head, luscious-looking apples, corn, squash, eggs, milk, potatoes, frozen chicken and lamb, a gorgeous autumn afternoon and the happy faces of UnitedHealthcare employees greeted those taking advantage of the 4th annual Dinners on Us in Sturgeon Bay on Oct. 9.

The program has been in operation for seven years, but has only been coming to the NWTC campus for the one-day distribution the past four years.

Last year Renee Ladewig-Lathrop of UnitedHealthcare, told the Pulse:  “Dinners on Us is my baby. We were looking for ways to help food insecure families. Obviously in the line of business we’re in we know that when you’re dealing with health issues and your income is an issue, there are a lot of barriers to getting food on your table. This is just one of the things we do for food insecurity.”

This year, she was too busy to talk, distributing frozen chicken, potatoes and those previously mentioned massive cabbages, which at one point looked like they were the unwelcome guest at this event, with people repeatedly turning them down.

“We ended up almost emptying the pallet!” she said the day after the food distribution in Sturgeon Bay. “We only had approximately 20 cabbages left.”