Correction: This article previously mentioned Sugar Creek as the only existing disc golf course in Door County. There is another eight-hole course at Sunset Park in Sturgeon Bay.

Shane Solomon and the group known as Door Disc Golf have taken the first steps in bringing two more courses to Door County. With plans for a nine-hole course at Sister Bay’s Sports Complex underway, an 18-hole course is in the works in Baileys Harbor.

“We what we’re trying to do is create a disc golf community up here,” said Solomon, who is the owner of Julie’s Park Café and Motel in Fish Creek with his wife Sande. “We’re trying to open up another avenue of attraction for Door County.”

Disc golf, also known as Frisbee golf, is a sport in which players throw a disc over a course into a basket. It is very similar to traditional golf in that a player strives for the fewest throws. 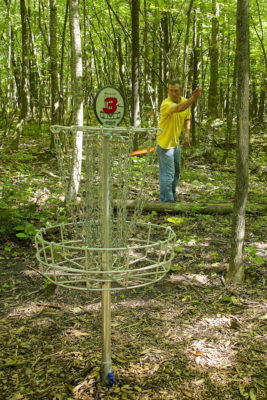 The inexpensive start up and maintenance costs are one of Solomon’s pitches to local boards. After the baskets, or holes, are purchased, the local municipalities barely incur any expenses. Solomon hopes donations will cover that initial startup cost, leaving little left to be picked up by taxpayers.

Wisconsin is known as one of the top disc golfing states in the country and while local players take advantage of courses on private land, there are only two public courses in the county at Sugar Creek County Park and Sunset Park in Sturgeon Bay. Solomon said the development of multiple courses in one area is important to the attraction of disc golf players. Similar to golf, they can make a weekend out of playing all over the county.

“There’s no organized official course [in Northern Door] so it started as, let’s see if we can get one course in, and then it seemed to be the consensus that we should get more up here,” said Solomon.

The nine-hole course in Sister Bay will weave through the sports complex and should be operating by summer.

“It’s a good beginner course but it will still give people that have been playing for awhile a fun course to play,” said Solomon.

If the group can get the Baileys Harbor course approved soon, they hope to host a tournament in the fall.

“I approached Baileys Harbor and after three meetings it came to a point to see what type of funding options they can have,” said Solomon. “If we were able to raise enough money to put the course in and Baileys gave us the ability to put that course in we could run a small tournament this fall.”

Small tournaments bring around 100 players to the area while national tournaments can bring up to 600 players from around the country. Solomon hopes the economic impact will garner support behind the project.

To donate to the upstart of the Door Disc Golf’s planned courses, visit gofundme.com/door-disc-golf-club-basket-fund.