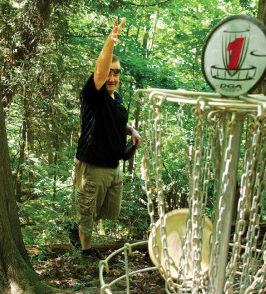 Baileys Harbor is on its way to becoming the focus of Door County as a disc golfing destination with the town board’s approval on June 19 of an $8,550 loan to Door Disc Golf to purchase the equipment to create an 18-hole, tournament-level disc golf course.

At the town board meeting, Shane Solomon and Jordan Zacek, representing Door Disc Golf, were asked by board chair Don Sitte what the town’s responsibility would be beyond providing the property off of Summit Road.

“Whatever the town would like to contribute, but really, we plan to do it on our own,” Solomon said. “As far as manpower, we wouldn’t require anything.”

Solomon added that club members would do the landscaping and would regularly police the grounds for garbage.

“We want to make sure we do it the right way,” he said.

The board briefly discussed color schemes for the course baskets, but when Solomon mentioned there is a red, white and blue option that would be unique among Midwest disc golf courses, all agreed that was what was wanted.

Solomon told the board that the club holds Thursday night league play as a way to help raise money for the cause. He guaranteed that if the organization was not able to pay back the loan after two full seasons of operation, he would personally pay back the town for the loan. “We will make you whole,” he said.

The town then voted unanimously to provide the $8,550 loan to purchase equipment, giving Door Disc Golf three years to pay back the loan.

While Solomon had earlier told the board they hoped to have the course open and ready for tournament play this year, he said realistically it probably won’t be completed until next year.