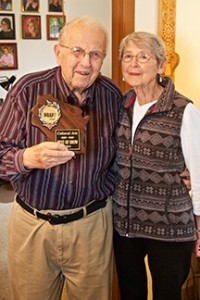 Don and Loraine Brink in their Sister Bay home.

Before his 18th birthday, he joined the Navy. Because he’d had chemistry and biology in high school, he was able to go in as a Seaman 2nd Class, which raised his pay by $4 a month – all the way up to $54. Assigned to work in the mental ward at Base 8 Hospital in Pearl Harbor, he cared for 50 combat survivors in a Quonset hut and, in his spare time, played trombone in a band for officers’ dances.

After the war, Don returned to Oshkosh, his hometown, and enrolled at the state teachers’ college. In an a cappella choir, he met a good-looking little alto named Loraine Schmidt and, on their second date, told her he was going to ask her to marry him someday. Her response? “You’re nuts!” They were married on Dec. 27, 1948.

They settled in Beloit, where Loraine was teaching first grade, and Don, who had transferred to the University of Wisconsin – Madison the previous fall, commuted every day. The next summer, Loraine gave up her job, they moved to Happy Acres Trailer Park outside Madison to await the arrival of Steve, the first of their seven children, and Don began a management-training program with the Monroe Street Kroger’s.

Nine months later, he was assigned to manage the tiny Kroger store in Evansville, Wisconsin. He proved to be a super salesman. One weekend, when there was a special on bananas, he ordered 15 40-pound boxes. The warehouse called to see if it was a mistake. In all its existence, the store had never sold more than two boxes in a week. Don sold the 600 pounds of bananas.

After two years with Kroger, he took his sales ability to Northwestern Mutual Life Insurance and the family moved to Racine. Always involved with music, Don took over a barbershop chorus, increased the membership from 17 to 85, and took ninth place in two consecutive years in a national competition. He moved up through the company as agent and district agent until one of his favorite clients died of a heart attack at age 48.

As a busy insurance salesman and the father of seven, Don had had no time for hobbies.

“Three or four years before he retired,” Loraine says, “he bought a lathe, with the idea of learning how to use it someday. When he finally had time to take a class, he found he was using the tools upside down!” 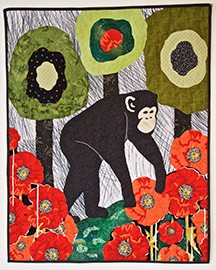 The Brinks had purchased land in Ephraim in 1976 and built a retirement home there a year later. In 1977 their oldest daughter, Jane, died suddenly, leaving a days-old infant. Retirement was suddenly filled with unexpected responsibilities.

Finally, in 1986, they moved to Ephraim. New friends invited Don to a carving class at The Clearing Folk School in Ellison Bay, and he soon began painting classes, too, every week in the winter. Both he and Loraine refined their bridge skills there.

“All our friendships were made at The Clearing,” she says. “It was the center of all our activity.”

Don proved to be very adept at both his new hobbies. A circular lamp base he carved is amazingly intricate, and he was especially fond of carving animals. His paintings reflect both his sensitivity (“War Mother”) and his great sense of humor (“The Quilting Bee”).

The latter relates to Loraine’s passion for quilting, something she took up about 15 years ago. Her work is beautiful. A lifelong lover of words, she also began writing poetry after moving to Door County. Widely published, she’s a member of two poetry groups, Unabridged and Wallace.

Life was good for the Brinks. Then, the macular degeneration which had begun to affect Don’s eyesight many years earlier became more aggressive. Last May, other disabilities unexpectedly brought him to the long-term care center at Scandia Village. He was legally blind and his hearing was also impaired. After a lifetime of being busy, it was difficult for him to cope with the idleness.

Loraine suggested to Patrick Knapp, the activities director, that with help, Don might be able to do some painting. Knapp covered the windows in the area with cardboard to reduce the glare. The Brinks’ daughter Bobbie Guerra, who lives in Austin, Texas, drew large fish on plywood. Her husband, Dan, cut them out and Don began to sand, design and paint them. Sixteen fish later, he declared that he was “a little sick of fish,” and the Guerras switched to butterflies.

The fish are hanging all over Scand, where Don and Loraine now live in an apartment in the Meadows, and Don hopes to sell them to benefit the facility’s building expansion. The story Knapp wrote about the project, “Saved by a Fish,” along with examples of Don’s work won Best of Show in the cultural arts competition at a recent state conference focused on activities for care center residents. It’s Don’s first ever award for his paintings. 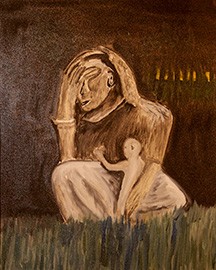 Although he’s no longer in the care center, Don still goes to the activity area almost every day and has added a bit of carving to his schedule.

The artistic projects of both Don and Loraine were featured in March in the Meadows Art Gallery, managed by Tom Seagard, who has scheduled another show of their work for next May.

And the Brinks have published a book. It came out last December, with copies as gifts for everyone at their 65th anniversary party. In its five chapters, Don’s prose vignettes from various stages of their life are interspersed with 27 of Loraine’s poems.