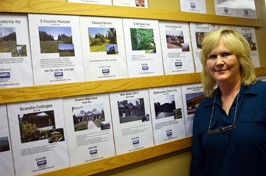 Kathy Sanden, president of the Door County Board of Realtors and a broker sales associate for Coldwell Banker, says with low interest rates and plenty of variety, “It’s a good time to buy.” Photo by Katie Sikora.

According to the Wisconsin Realtors Association (WRA), a lot of Wisconsin residents seem to think it’s a good time to buy a home.

In its most recent year-to-date report, the WRA said Wisconsin residential sales in July 2012 were up 17.3 percent over July 2011, and sales in Door County were up 20 percent.

Additionally, statistics compiled by the Door County Board of REALTORS say that year-to-date sales of homes and residential condos in the county have increased by 27.3 percent over this time last year.

“It’s really a great time to get into real estate if you qualify,” she says. “The interest rate is 3.5 percent on a 30-year fixed mortgage…which is like a give-away.”

While interest rates are low, Sanden says getting a loan is a bit tougher now than it was five years ago. After the burst of the housing bubble and the mass of foreclosures it brought about, banks throughout the United States tightened their belts and implemented more requirements for loan qualification.

“The reason there’s so much documentation is to make sure the loans are good for Fannie Mae and Freddie Mac,” says Jodi Kaye, a mortgage loan officer with BankMutual in Sturgeon Bay.

In order to achieve the lowest possible interest rates, banks often sell their loans to larger loan-backing entities like Fannie Mae and Freddie Mac. Since the economic downturn began, those entities have been requiring stricter documentation to make sure they’re not taking on bad loans.

Kaye says she’s definitely seen an increase in the number of real estate purchase inquiries, with one coming into her office almost every day. She also says the increased amount of applications and necessary paperwork has slowed the turn-around on approving loans.

“Everyone is backed up because so many people want to get loans, which is hopefully good for the economy,” she says. “But as long as people have good credit and qualify they’ll be able to get a loan.”

The median price for residential real estate throughout the state rose 2.1 percent from July 2011 to July 2012 according to the WRA report, but it fell 13.3 percent for Door County. The year-to-date numbers are less drastic, with state prices rising only 0.4 percent and county prices decreasing only 1.1 percent.

“Buyers are confident about getting a good deal, and so they’re jumping into the market,” she says.

Sanden says the decrease in prices has made homes more affordable, but it hasn’t really changed the dynamic of who buys where in Door County. Most sales in Northern Door are still second-home sales, while first-time buyers are looking in Sturgeon Bay and Southern Door.

“There are some more affordable homes [in Northern Door] than there were, but percentage-wise you’re going to have more in Sturgeon Bay or Southern Door,” she says.

The inventory of homes and vacant lots left on the market in Door County has decreased from this year to last. As of August 28, 718 homes were available, compared with 778 this time last year, and 804 vacant lots remained unsold, compared with 912 in 2011.

Still, Sanden notes there are quite a few options left for those looking to make a purchase.

“There’s a variety out there and there’s enough to where you have good choices,” she says. “It’s a good time to buy.”

The U.S. Federal Reserve has made statements indicating that it wants to keep interest rates low through 2014, but Kaye says they’ll eventually go back up.

Sanden says many of today’s buyers are likely thinking about the fact that interest rates will eventually rise, and that’s why they’re buying now.

“We know interest rates are down now,” she says, “but who knows what’s going to happen even after the November election.”

Massey agrees that the election could potentially shake up the home market, affecting everything from interest rates to taxes to consumer confidence, but feels sales will most likely keep going up.

“There’s always some uncertainty in an election year,” she says, “But, generally, I think the trend will continue.”