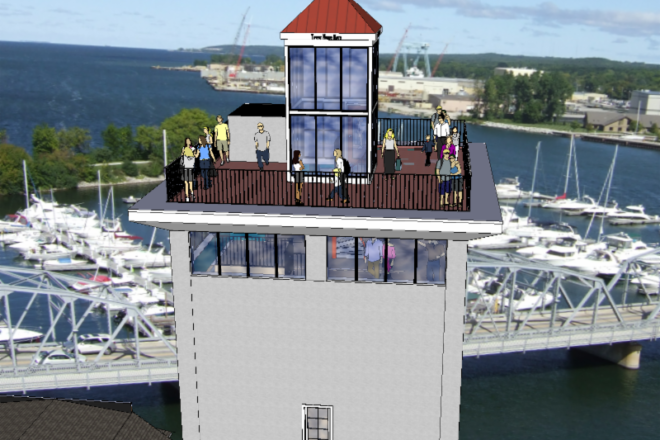 The Door County Maritime Museum & Lighthouse Preservation Society has been actively engaged for nearly a year in a fundraising campaign to both construct a 10-story museum tower addition and expand the current facilities in Sturgeon Bay. The campaign has reached out to more than 2,000 individuals, corporations, foundations and small businesses. Nearly half of the funds needed for construction and one-quarter for the entire project has been raised to date.

“We have been extremely pleased with the response shown by the Door County community and our supporters outside the immediate area. The tower and addition are planned to become a reality in 2017,” said Bill Harder, president of the museum’s board of directors.

The tower will feature an elevator ride to the 10th floor enclosed observation deck with its 360-degree view of Sturgeon Bay. Guests will be able to see downtown Sturgeon Bay to the north and south as well as seeing commercial and recreational boat traffic in the harbor.

“We are preparing for the future of the Door County Maritime Museum,” explains Harder. “A key objective will be to make a visit to the museum not only memorable for the artifacts and displays, but also as an eye-opening educational experience. This project will propel the museum towards 21st century modernization, joining the growing trend among museums across the country.”

For more information related to the campaign or to support the project, call 920.743.5958.