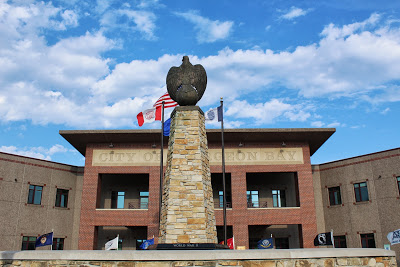 At the Sturgeon Bay Government Center, 421 Michigan St., an impressive brick tower with an eagle at the top and a list of names at the bottom honors those who perished in all wars. Submitted.

Although the Memorial Day weekend signifies the unofficial beginning of summer, it is the most solemn of holidays because of what it represents. More than 1.3 million military personnel have sacrificed their lives in the line of duty in American wars.

Permanent war and veterans’ memorials are visible reminders of the sacrifices of those who served, yet it is possible that visitors and residents have passed by these memorials many times without noticing some of them.

Therefore, beyond the ceremonies and special community events that take place from Southern Door to Washington Island, a drive on Memorial Day – or any day – can be made more special by visiting and paying respect at some of these memorials.

Sturgeon Bay has several memorials dedicated to veterans, a few of which are easy to spot because of their size and location.

The U.S. Coast Guard has used crossed oars and an empty life jacket as a symbol for fallen crew members for many years. Near the entrance to the Maritime Museum, 120 N. Madison Ave., such a memorial honors those who served in the U.S. Life Saving Service, a forerunner of the U.S. Coast Guard.

At the Sturgeon Bay Government Center, 421 Michigan St., an impressive brick tower with an eagle at the top and a list of names at the bottom honors those who perished in all wars.

At the Door County Government Center, 421 Nebraska St., a memorial on the building’s front lawn states, “Proudly we pay tribute to those men and women of Door County who answered their country’s call.”

Traveling north to Baileys Harbor, look for a stone memorial at the front of the historical town hall, 2392 Cty F, dedicated to all those who served. The American, Wisconsin and town flags all fly there as well.

Rather easy to miss in Fish Creek is a plaque on the grounds of the Gibraltar school, 3924 Hwy 42, directly in front of the school and flag pole. It honors the memory of Pvt. Charles H. Drengberg, who was killed in action in 1950 during the Korean War at age 19.

Ephraim’s Anderson Dock, 3083 Anderson Lane, is a popular place to visit because of the art gallery and the multicolored graffiti covering the building. But at the end of the dock, a tall, white pole and a plaque honoring 1st Lt. E. Eugene Helgeson Jr. (1941-69), who died during the siege of Kne Bahm, Vietnam. Helgeson is buried at Arlington National Cemetery and listed on the Vietnam Veterans’ Memorial wall in Washington, D.C.

And on Washington Island, a war memorial is located near the old school.

The Origin of Memorial Day

The tradition of honoring U.S. soldiers who died in service of their country dates back to the Civil War. Originally, only Civil War soldiers were commemorated, but later, the idea of Memorial Day was expanded to honoring everyone who had died in any American war. It was called Decoration Day for many years, and it became an official holiday in 1971. The national holiday takes place on the last Monday in May.