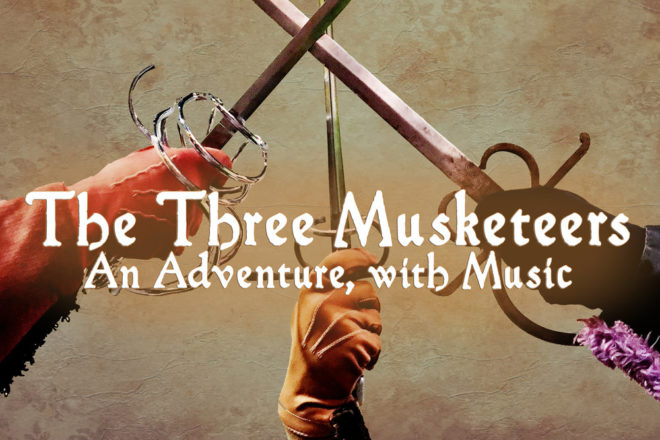 Door Shakespeare has announced its summer 2022 lineup: The Tempest by William Shakespeare and The Three Musketeers: An Adventure, with Music by Joe Pine, based on the novel by Alexandre Dumas, with music and lyrics by Scott McKenna Campbell. The season will run June 22 – Aug. 27 at Door Shakespeare’s outdoor theater on the grounds of Björklunden in Baileys Harbor.

As one of Shakespeare’s last plays, The Tempest shows the Bard in top form. It begins with a ship being torn asunder in treacherous waters, and the story that unfolds incorporates magic, nymphs, reapers, dogs, singing and dancing, high comedy, intrigue, romance, betrayal and some of Shakespeare’s most memorable characters and passages.

The Three Musketeers had its world premiere in 2017 at the Ohio Shakespeare Festival. The story, set in 17th-century France, follows the exploits of the elite Musketeer guard and bodyguards to the king: Athos, Porthos and Aramis, who are the most daring sword fighters in France. When d’Artagnan, a brash young man from the countryside, arrives in Paris to join their ranks, they become the greatest friends of his life, and when a villainous plot is hatched against the queen, the four dashing blades come to her rescue.

“We are delighted to return to the Björklunden Garden with a more traditional Door Shakespeare season,” said managing director Amy Ensign. “In addition to The Tempest and The Three Musketeers, we are bringing back three popular educational programs: Will in the Woods, Shake It Up Saturday and our youth theater program, Camp Will.”