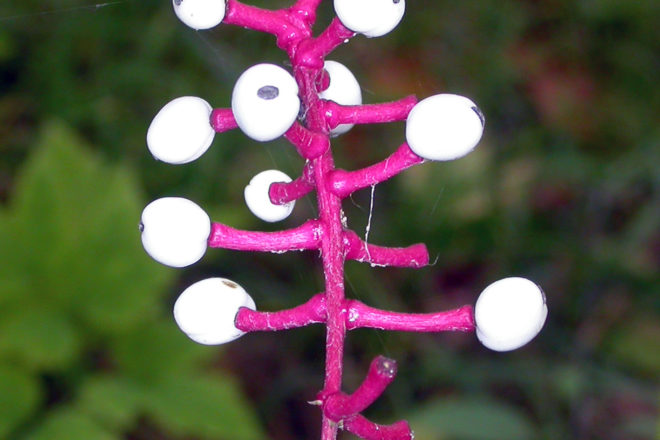 These doll’s eyes are looking at you

I’ve led mushroom hikes in Door County for nearly 45 years, and people often ask whether a particular mushroom that we find is edible. The answer is always to learn the identity of the mushroom and study what the field guides say about eating it. The same applies to eating a berry on a plant in the woods: Identify it first, and learn whether it’s poisonous.

When walking the woodland trails during late summer, you can find wild fruits of various colors and shapes. One of the most common is doll’s eyes, also called white baneberry. A less-common species is red baneberry.

Baneberry plants are in the Crowfoot family, Ranunculaceae, (ra-nun-cue-LAY-see-ee). The name comes from the leaves, which are divided like a bird’s foot. This family is large, containing 19 genera, and it includes many familiar flowers such as clematis, hepatica, columbine, buttercup, meadow-rue, anemone and delphinium.

There are three plants in the group with a poisonous ilk: wolfsbane, bugbane and baneberry. “Bane” means “deadly, poisonous, harmful or causing death, destruction or ruin.”

The Crowfoot family, however, also contains the plant called golden-seal, Hydrastis canadensis, which had been widespread in rich woods of the eastern U.S., but it’s mostly gone because of its use as medicine. Another name for it is turmeric.

One of the most striking and eye-catching members of this family – the white baneberry, found growing in cool, shady woodlands – may soon adorn the late-August landscape. These hardy perennials with showy spikes of white berries are said to be mildly poisonous – hence the name “baneberry.”

I find it difficult to think of something being mildly poisonous. In my estimation, it’s either poisonous or nonpoisonous, but people are bound to have varying reactions to these and other wild plants.

To add a note of clarification to the word “poisonous,” it’s improper to describe a snake as being poisonous. In fact, a rattlesnake’s flesh is known to be quite good to eat. If the snake itself were poisonous, it could not be consumed safely. Instead, a rattlesnake should be described as being venomous, not poisonous. The same holds true for a few spiders.

Back to the white baneberry. Many people call this attractive plant doll’s eyes. The fruit is a four- to six-inch-long cluster of loosely spaced, oval, white berries, each with a bold, black spot on the end where the broad stigma had been attached.

Linnaeus named the plant Actaea (ak-TEE-a) – the ancient name of the elder – because its delicate, compound leaves resemble those of the elder. Its species name, pachypoda (pa-KIP-oh-da) means “thick-footed,” which refers to the thick, pink pedicels.

The story is that the berries resembled the old-fashioned china eyes that children would manage to gouge out of their dolls’ heads. Pinkish-red pedicels (PED-i-sells) – the short stalk to which each berry is fastened – and peduncles (PEA-dun-kls) – the central stalk from which the individual pedicels grow – support the ivory-toned berries.

Because the plant can reach a height of three feet, it cuts a very striking figure against the more earthy greens and browns of early autumn. During the spring, few wildflower photographers are attracted to the plant’s somewhat small, egg-shaped raceme (ra-SEAM) of tiny, fuzzy-looking, tightly grouped, white flowers. Shortly after the cluster of flowers has reached peak bloom, the petal-like sepals fall to the ground, leaving behind mostly the stamen and stigmas.

Slowly the small, green berries form on thickened pedicels. Finally, by late summer and into early October, each oval berry, about the size of a pea, has turned white.

The striking pink pedicels on the white baneberry are quite different from those on the red baneberry, Actaea rubra (ROO-bra), which has a more globular cluster of glistening, varnished-looking berries supported on very thin, delicate – or, as botanists say, filiform – pedicels.

I hope your peaceful hikes into the autumn woods reward you with the discovery of some spectacular doll’s eyes.