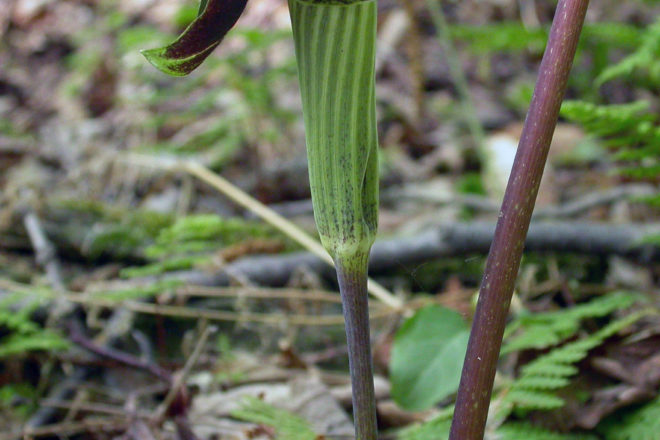 This Jack-in-the-pulpit is a male. The photo shows the deep maroon color of the underside of the spathe, which is the leaf covering “Jack.” Photos by Roy Lukes.

We’re looking forward to the spring flowers that will soon carpet the woods – first in the upland hardwoods – with delicate petals of many colors. One plant that my late husband, Roy, and I always thought of as the native harbinger of spring is the skunk cabbage, which grows in cold, low, wet areas. I found my first skunk cabbage on April 15 this year. You may have plants that blossom earlier, but they are introduced, non-native domestic flowers such as crocus or daffodils.

The skunk cabbage is one of about 3,750 species in 114 genera of plants in the Arum (Araceae) family, most of which are found in the tropics, and it has no other closely related species in Wisconsin. Our species Symplocarpus foetidus can be found in only two regions: the eastern U.S. and eastern Asia. The skunk cabbage is among the oldest of all modern-day flowering plants, and it is thought that it can live for 100 to 500 years.

These plants’ special feature is the spadix – a spike of many tiny flowers – enclosed by a spathe, which is a modified leaf.

Several of the Arum plants produce heat to protect themselves from cold weather, so we’ve seen skunk cabbages surrounded by snow but not covered by it. A few plants in this family also emit foul odors – hence the skunk cabbage’s common name. The odor and heat attract a greater variety of insects, which aid in pollination.

Several other plants in this family have interesting common names – dead horse arum lily, snake lily, voodoo lily and elephant foot yam – and others are popular house plants: dieffenbachia and philodendron. These can be toxic because their leaves contain calcium oxalate crystals, which, if ingested, can cause tissue swelling and the inability to swallow.

Two wild creatures are known to depend on the skunk cabbage in April. Our native black bear, coming out of hibernation soon, is said to eat the thick, long, fleshy, white roots. The honey bee, imported from its native Europe, uncannily locates the hidden flowers of the skunk cabbage and consumes pollen from them. These early bloomers beat even the catkins of the willows, pussy willows, whose pollen is also important to hive bees.

The jack-in-the-pulpit – another member of the Arum family – is a flower in which you can easily see the pencil-like spadix, or “Jack the preacher,” surrounded by the overhanging leaf, the protective spathe or “pulpit.” Gently curl back the pulpit to see the true flowers around the base of the spadix. The majority have only staminate, or male, pollen-producing flowers; some have both male and female flowers; and a few have only pistillate, or female, seed-producing flowers.

Few other flowers are capable of the sexual changes that Jack (or Jacqueline!) can undergo. A ripe seed germinates during its first growing year and develops into a tiny, three-leaved plant that develops a stronger corm each year thereafter. After as many as five or more years, it produces a flower. Nature seems to have done some careful planning because the first flower is entirely staminate, requiring considerably less energy than the pistillate flowers. Then, as though attaining the pinnacle of perfection, the year arrives when Jacqueline-in-the-pulpit adorns a particular niche in the cool, moist, hardwood forest.

Growing conditions that change from year to year affect these plants. If the shade increases, soil temperature is lowered, and nutrients are gradually altered. Then the flower enters a “retrograde” stage when, instead of having only seed-producing flowers, it forms both male and female flowers again. With a new season, the plant will go back to having only pollen-bearing flowers, and a year will arrive when it produces only leaves.

Jack offers a suspenseful and fascinating sequence from early May through late fall. A slightly mottled peg, rolled up tightly to a point, emerges just about the time the hepaticas are showing their last blossoms. Gradually the leaves uncurl, and the hooded spathe rises and opens its tubular vase to expose Jack. The female flowers are fertilized, usually by gnats attracted to the meaty color of the spathe’s interior. Slowly the pulpit and leaves wilt, leaving only the little spike topped with a knob of closely clustered, shiny, green fruits, which, by fall, turn to brilliant scarlet.

Find the few places where these two unusual plants grow, and be thankful that you can enjoy seeing them usher in spring!