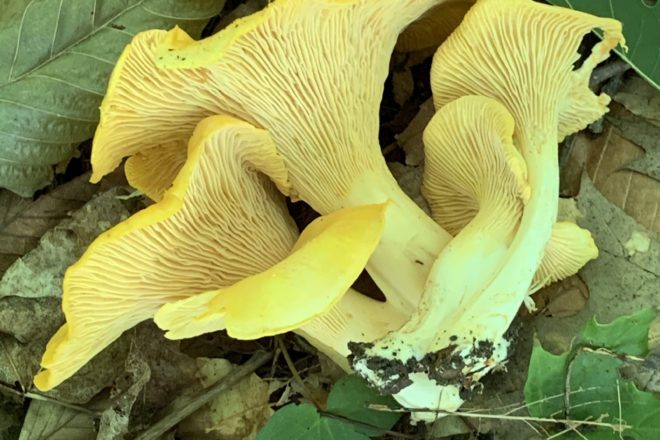 Golden chanterelles have smooth tops and blunt-edged, shallow, forked gills that curve down the stalk. Photo by Charlotte Lukes.

The best time to find a great variety of wild mushrooms is autumn. That’s because fungi increase their development as the growing season for all plants comes to an end. A few species have an earlier fruiting time, however. May is the best month for morels, and July is usually the prime month for seeking the first golden chanterelles.

I always hope for a winter with lots of snow and a wet, warm spring to foster morels. The ample moisture must continue through June for the next delectable fungus to develop, so a dry June destroys all hope. As of July 3, much of northern Door County had had only 1.4 inches of rain during the previous 38 days, but on July 4, I received one inch of rain, so maybe that will help.

The golden chanterelle (shan-ter-EL) is normally found in mixed hardwoods and grows in the soil, not on wood. Its color is a deep egg-yolk yellow, and, when freshly cut, it has a mild fragrance of apricots. The stalk is solid and rather thick, not thin or wirelike. The Latin name is Cantharellus cibarius (kan-tha-REL-us se-BAR-ee-us).

When collecting good, known edible mushrooms, it’s best to cut the stalk just above the ground and leave the base in the soil. That will keep the mycelium (the vegetative part of the plant) intact to continue growing, and you will take home a cleaner product.

Soil moisture is so important to the development of mushrooms. When there’s an extended period with no rain, the mycelium begins to go dormant. The longer the dry spell, the greater the quantity of moisture that’s needed to bring the mycelium out of dormancy, and then more rain is necessary to help the fruiting bodies (the mushrooms) grow above ground.

The notable feature of the golden chanterelle is the forked gills, which are blunt edged, rather shallow and curve down the stalk. Funnel species have more widely spaced gills and thin flesh.

I usually wait a couple of days after a heavy rain to seek chanterelles. The young caps are slightly rounded on top but soon become flat to slightly depressed. A more depressed cap indicates it has been there a couple of days. When I cut the stalk, I turn the mushroom over to look at the cut end. A really fresh mushroom has a solid stalk, whereas an older one shows small holes made by maggots eating their way up to the top from inside.

There are other members of the Chanterelle family that appear later in the summer and fall, and some are really excellent edibles. The golden chanterelle has been seen growing as late as mid-September in some years. During the very wet summer of 1996, I picked seven pounds in two hours.

Cantharellus tubaeformis, the funnel chanterelle, has been seen in several locations from Sturgeon Bay to Ellison Bay from early September to mid-October. C. lutescens, known as the yellow foot, grows at The Ridges Sanctuary and Logan Creek from late August to mid-October. Neither of these species is substantial for a meal, but they are interesting to identify.

Another genus in the Cantharellaceae is called Craterellus (kray-ter-EL-us). There are two species in this group, and both are difficult to find in the woods because they blend in with the leaves and other forest debris on the ground.

The first is the horn of plenty, Craterellus cornucopioides (korn-u-ko-pe-O-eh-deez). It’s pale gray, has white spores and forms a deep funnel shape with the underside, made up of wrinkles rather than gills. It can be found from late August to early October and always grows in soil.

The other one in this group is Craterellus fallax, or the black trumpet. It can grow in scattered or slightly clustered groups on the ground and may be up to eight centimeters tall, with flaring, funnel-shaped tops up to six centimeters wide. Spore prints of this species are pale tan to pale orange. The first time I cooked some of these, they became flat in the pan and turned black. Their appearance was not very appealing, but the flavor was wonderful.

Be very careful to collect only truly safe, edible mushrooms, and never eat raw mushrooms – always cook them. Don’t let ignorance or carelessness be the cause of sickness or possible death from consuming the wrong mushroom.