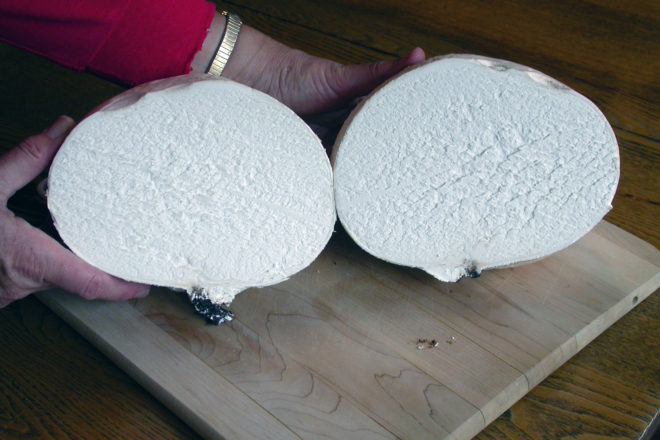 A giant puffball is edible if the inside is totally white and even-textured. Photo by Roy Lukes.

The rains have been abundant this fall, and that’s making wild mushrooms grow in many places in great numbers and varieties. I’ve been keeping records of fungi in 15 areas of the county for the past 45 years, and the area with the highest total is Whitefish Dunes State Park, with about 250 species.

Many people have asked me to identify a mushroom that they found on their property or in a park. In years such as this one, some species develop that have not been seen in a long time. Mushrooms are 80 to 90 percent water, so the heavy rain is truly to their liking.

I remember a class that my late husband, Roy, and I were teaching during a Björklunden seminar week in 2013 when I found a very unusual mushroom. I made a detailed study and identified it, and my records showed that the last time I had found it was in 1993, the year of the Midwest floods.

Recently on a hike in a favorite preserve, I picked one small mushroom to photograph, study and try to identify. It turned out to be the wine cap, Chroogomphus vinicolor. The only other time I had seen and identified it was 22 years ago.

As fall continues, the cooler weather and moisture will keep producing more mushrooms. Some of my favorite edibles can be found now through mid-November. I’ve eaten about 18 species of wild mushrooms, and I’ve found that their flavors and textures are all quite different.

One that’s in my top three is the horn of plenty, Craterellus fallax. It is obscure, growing on the forest floor, and unless you know what to look for, you can walk right by and not even notice it. It’s easy to clean and cook – turning black and looking a bit unappetizing in the process – but the flavor is scrumptious.

Another one that I’ve seen during the past two weeks is the aborted Entoloma. Some scientists now think that this mushroom is really an aborted Armillaria. Perhaps the DNA researchers will study this species and come to a clear conclusion. Nevertheless, it’s easy to identify and cleans up quickly to be sliced and sautéed in butter. It has a crisp, nutlike texture and taste.

Roy’s dad, who lived in Kewaunee all his life, knew just the time and place to pick his favorite mushrooms: honey caps, Armillaria mellea. Roy’s mother cooked and canned them for future meals.

Many people who eat wild mushrooms know the shaggy mane, Coprinus comatus, which can appear along gravel roadsides and in lawns. I have some photos of these very delicate, white, tall, slender mushrooms breaking up asphalt pavement as they force themselves out of the ground, yet they’re so fragile that you can easily crush one in your hand.

They must be harvested when they’re completely white inside and then cleaned and cooked right away. If wrapped and left in the refrigerator, they turn into black ink and must be thrown away. The shaggy mane is the inkiest of the group known as inky caps. The gills, which make up most of the cap, are so closely packed that the microscopic spores cannot drop to be carried away in the air.

An enzyme in the cap causes the gills to turn pink, then gray and finally black from the lower edge up to the top of the stalk. The spores are “liquefied” and then drop off to help in the mushroom’s reproduction.

The scientific term for this process is deliquescence. I wrote a short poem to honor the species:

They spring up, white, overnight;

Then deliquesce into such a mess!

One of the mushrooms people collect and eat is the giant puffball. It’s a safe one because there is no poisonous one that looks like it. You can cut it in half to make sure the inside is pure white and homogenous, and it peels easily. Then cut it into two-inch-by-two-inch thin slices, and sauté it in butter. It soaks up a lot of butter.

One of my former students said she beats egg and milk together in a shallow dish, dips the puffball slices into the mixture, then dips them in crushed saltines, and fries them in butter. I asked her what they taste like, and she said, “Like fried soda crackers!”

Enjoy the abundance of wild mushrooms, but be extremely careful to know exactly what you plan to eat. Never eat raw mushrooms. There are many poisonous species in our area, and some can look like edible fungi.

Remember: If in doubt, throw it out!