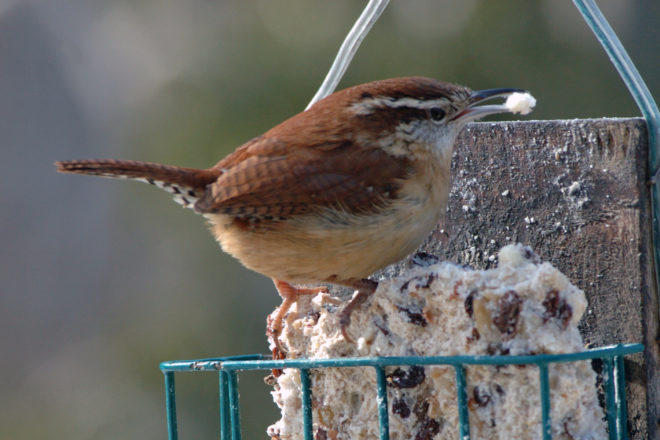 One Carolina wren was seen during the Sturgeon Bay Christmas Bird Count. When they visit during the winter, they usually eat suet. Photo by Roy Lukes.

The Sturgeon Bay Christmas Bird Count was conducted Dec. 14 with 11 field parties consisting of 23 observers. Each group was assigned a particular section of a 15-mile-diameter circle, the center of which was the junction of Highway 57 and County P at Institute.

The day began with a low of 28 degrees, overcast skies and very little wind. By the early afternoon, it began drizzling, with increasing fog and poor visibility. That made birdwatching out in the country a bit of a challenge. Eventually the rain changed to snow.

Each year we also enlist the help of people to count the birds they see in their yard and at their feeders if they live within the count circle. This year 19 feeders had reports come in. The most unusual species was from a home along Tacoma Beach Road, where a Carolina wren was spotted. During past years when this Southern species has been reported here during the winter, the birds have most often been found eating at suet feeders.

Some new record-high numbers of a few common birds were set. Many blue jays stayed in the county this winter, perhaps because of the ample supply of acorns and many other seeds that the native trees produced in great quantity. This year’s 246 blue jays surpassed the previous high of 238 set in 2014.

Another record was seen in the hairy woodpecker total. The previous high of 62 was set in 2013. This year, 74 were reported. One reason for their greater population number might be that these birds eat the emerald ash borers that are devastating Door County’s ash trees.

Sharp and competent bird observers are so valuable to these counts. The following species were found with only one individual spotted throughout the day: gadwall, lesser scaup, double-crested cormorant, American kestrel, merlin, brown creeper, Carolina wren, winter wren and swamp sparrow.

Another statistic of how low the bird numbers were on Dec. 14 is that these additional species were seen by only one group, and that includes the feeder watchers: American black duck, sharp-shinned hawk, golden-crowned kinglet, snow bunting, American tree sparrow, purple finch and common redpoll.

We’ve been doing the Sturgeon Bay count since 1996 and had to cancel just once – in 2016 – when heavy snow fell all day. The following day was bitter cold with poor driving conditions, so the Brussels count was also called off in 2016.

Each year we tally the number of species seen as well as the total individual birds reported on the count day. The average number of species for all of the Sturgeon Bay counts is 57. This year we totaled 55, so it was close to the average. The highest number seen was in 2001, when there were 72 species found. The lowest was in 1996, with only 46 species spotted.

The Brussels count was held Dec. 15, with a morning low of 15 degrees and clear, blue skies. A cold wind made the outdoor birding a chilly experience, and the day’s high temperature reached only 20 degrees.

There were eight field parties, with 18 observers covering the circle whose center was at the junction of County DK and Stevenson Pier Road. Only four feeders were monitored, but some new records were produced: Our first eastern towhee was reported at a feeder about a mile south of Sugar Creek County Park, and a new record high of 47 bald eagles was tallied.

These nationwide Christmas bird counts have been going on since 1900 as a form of citizen science that adds to the wild-bird data used by governments and research programs throughout the country. We who participate feel good about trying to help scientists understand what’s happening to the wild birds that share this planet with us.