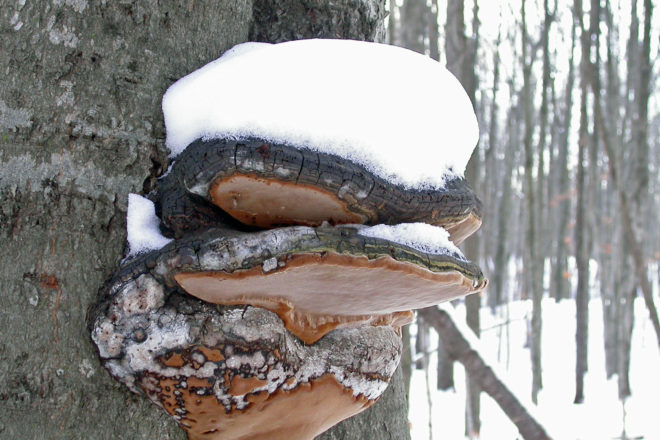 This perennial conk, called the false tinder polypore, grows on standing hardwoods and causes white rot in the tree. Photo by Roy Lukes

Most people think of mushrooms as small, soft growths on the forest floor, or sometimes on trees, or perhaps only those that come in boxes at the grocery store. However, many mushrooms – also called fungi – are very hard annual or perennial growths on trees in a variety of forests.

During my 50 years of studying wild mushrooms, I’ve found 46 species of polypores in Door County. The name “polypore” comes from the spore-bearing surface that’s generally on the underside of the growth. When examined with a 10-power magnifier, you can see the masses of tiny holes, or pores, from which the microscopic spores are released. “Poly” means “many,” and “pores” refer to the holes.

Some polypores are soft and pliable and last for only one growing season. Others are soft, small and thin, but they can stay on a tree for many years in a hardened, dried state. These are usually in the genus Trametes. They frequently grow in overlapping masses and are either white or quite colorful when fresh. After a few years, algae forms on their tops, and they turn green.

Mushrooms do not have chlorophyll and cannot make their own food, so green is not a color associated with fungi. Most of the woody polypores get their nourishment from the bark or heartwood of trees, and when you see that these have formed, you know the tree is doomed.

Many woody polypores are perennial and add a new layer of pores each year. They continue to grow as long as they get nourishment from the host tree, and many are nearly as hard as the tree they’re attached to.

Polypores are generally inedible because of their hard, woody texture. The only one that is sometimes consumed is the chicken of the woods, or Laetiporus sulphureus (lay-TIP-o-rus sul-FUR-ee-us). It grows in colorful, overlapping layers mostly on hardwood trees, and only the yellow outer edge is edible. When eating any mushrooms, cook them thoroughly first – never eat raw mushrooms!

Perhaps the most common woody polypore found on deciduous hardwood trees is the artist’s conk, or Ganoderma applanatum (gan-o-DER-ma ap-plan-A-tum). “Conk” is a generic term for the hard polypores that form large growths on tree trunks. This species is perennial and can grow to 30 inches in diameter.

The “artist” part of the name comes from its ability to retain a picture drawn on the fresh, pure-white pore surface with a sharp instrument. Every place that’s drawn on will turn brown, which is the flesh color underneath, and the conk will remain unchanged for a few years with the artwork intact.

A relative of this species is called the hemlock polypore, or Ganoderma tsugae (TSU-gay), because it grows on the eastern hemlock tree and is thus named for the hemlock genus. When fresh, it has a gorgeous, rich-brown, varnished surface.

White or paper birch trees are hosts to many species of woody polypores, the more common ones being the birch polypore, Piptoporus betulinus; and the gilled polypore, Lenzites betulinus. The genus of birch is Betula.

One of my favorites found on birches is the violet-pored polypore, Trichaptum biforme (try-CAP-tum by-FOR-me). The outer margin is purple when it’s fresh and growing, and the underside has purple at the margin that fades to pale lilac inward on the fruiting body. This species differs from typical polypores in that its underside forms tiny, jagged, toothlike pores as it ages.

One of the softer and more beautiful polypores is the resinous polypore, or Ischnoderma resinosum (ish-no-DER-ma res-in-O-sum). It has a somewhat velvety texture, deep-brown top color and a paler, soft, rounded margin when fresh. Observe the underside, and you’ll find golden droplets exuding and clinging to the pale-tan surface. I have seen it on dead maple trees.

A small, white, easily overlooked polypore that grows on hardwood sticks and logs is called the split-gill, or Schizophyllum commune (skits-o-FY-lum kom-YOON). It is tough and slightly woody, but it has gill-like structures on the underside that are divided down the middle – and thus the common name.

The polypore genus was originally used for all tough mushrooms with a porelike undersurface. Now there are a great number of genera with many distinctive characteristics, and the genus Polyporus (po-LIP-or-us) is only for a small group. This group usually has a cap and a stalk, and it grows on wood but can sometimes be terrestrial.

This entire class of woody fungi is vital to life on earth because its members are the decayers of dead wood, breaking down the lignin and cellulose and returning it to the soil. If they did not exist, all dead trees would lie indefinitely where they fell, and life could not go on.

Be thankful for mushrooms – especially the woody polypores. They are nature’s recyclers!