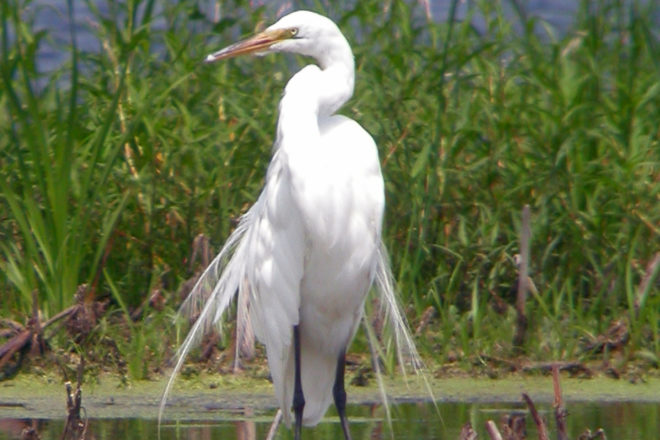 This great egret shows the long, fine, white feathers on the sides of its body. Photo by Roy Lukes.

I have recorded most of the migrating species of birds that travel through Door County during the official spring season, March 1 to May 31, since 2002. Many birders in our county post the dates of their sightings to our Doorcobirders email group, and some mail a report form to me.

A number of birdwatchers have told me that they are seeing more common egrets this spring than great blue herons. When I moved up here from Milwaukee, I didn’t know much about birds other than our state bird, the American robin. I didn’t remember seeing any great egrets up here and always thought of them as Florida birds.

Great blue herons are early to arrive, often being seen in their distinctive flight posture by the third week of March. These large birds usually nest in heron rookeries. They need to be near wetlands and must have extensive tracts of undisturbed woodlands to succeed. I know of a large rookery northwest of Manitowoc, but I do not know of any here in Door County.

The first Wisconsin Breeding Bird Atlas research, done between 1995 and 2000, found confirmed nests of great blue herons in the far northern part of Door County and noted seven other sites with probable nesting activity. The great egret was confirmed to be nesting on one of the islands in central Green Bay waters and in one area at the mouth of the Fox River near Green Bay. All the rest of the great egret sites were in the southern half of the state.

This is the final year of five seasons of preparation work to publish a second Wisconsin Breeding Bird Atlas. It will be interesting to see the changes in areas of the state for nesting confirmation of these two species during the last 20 years.

Since 2002, the great egret arrival dates in Door County were mainly in May until 2010. From that year on, this species has been seen in April and as early as April 3 in 2017. They winter in the far southeastern U.S., Mexico and Central America.

Breeding activity is abundant in the Horicon Marsh, but the current map on the Cornell Lab of Ornithology website shows no activity or sightings in Door County. In the late 1800s, these birds were hunted to near extinction for the extra-long feathers that they produce during the breeding season. The feathers were used on women’s hats during the Victorian age.

This practice of killing birds for fashion customs brought about the laws that now protect most birds. In fact, the great egret is the symbol of the National Audubon Society. Its record for longevity is more than 22 years.

They nest near water and hunt in typical heron fashion: by slowly and carefully stalking their prey in shallow water, and then, with a rapid move of the head, jabbing a fish that’s swimming by. Their top flight speed is about 25 miles per hour.

The green heron nests throughout much of the eastern U.S. to the central Great Plains and along the West Coast. Its populations are declining greatly as more wetlands are being drained, and the drastic flooding happening this year in much of central North America will wipe out many breeding sites for these birds and most ground-nesting species.

Black-crowned night herons are colonial nesters like the great blue herons. The male will begin building the nest and try to attract a female. When she joins him, the female will finish the nest-building with help from her mate.

The only other egret seen in Door County on rare occasions is the cattle egret. I remember a phone call that my late husband, Roy, and I received in late October 1978 telling of eight strange, white birds on a cement dock at North Bay. Roy rushed up there with his camera and photographed eight cattle egrets hunkered down in the cold wind. This species has been documented to nest on the western shore of Green Bay waters and at Horicon Marsh.

Be aware of these handsome wetland birds in our county, and give them their space. Do all you can to help preserve their nesting habitats.