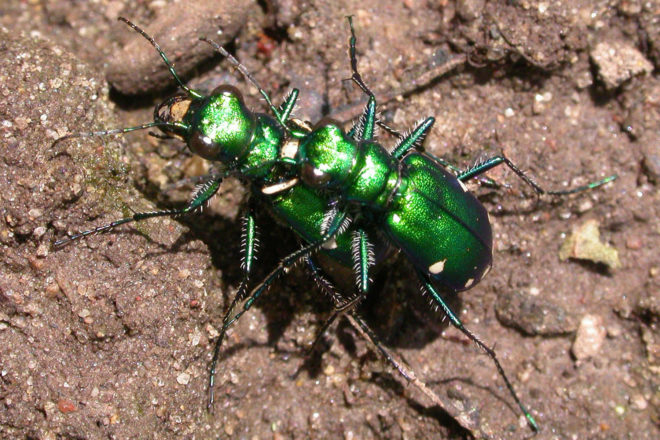 Yes, there are tigers in northeast Wisconsin. Some that hunt their prey by day, others by night. Their eyesight is excellent when they are not running too fast, and they use their amazing speed and fierce jaws to bring down their victims. Fortunately, these are not four-legged mammals, but rather, six-legged insects: tiger beetles.

Delve briefly into the field of entomology, and you’ll find that beetles, in the order Coleoptera (co-lee-OP-ter-a), make up about 40 percent of all animals – easily the largest of all orders. On this subject, Oliver Wendell Holmes said, “No man can truly be called an entomologist, sir; the subject is too vast for any single human intelligence to grasp.”

There are about 147 species of tiger beetles in North America, and some are considered critically endangered. I feel fortunate to be able to see the brilliant green tiger beetles every day on my sidewalk or driveway.

Beetles in general can be easily recognized by their tough, armor-like forewings, called elytra (EL-eh-tra; the singular is elytron), which cover the softer hind wings, used for flying. When observing tiger beetles at rest, you’ll see that their elytra usually meet in a line down the middle of the back. The order name, Coleoptera, means “sheath wings” and refers to the elytra.

Starting around the middle of June and usually extending into early August – especially on sunny days – I see the metallic-green, six-spotted tiger beetles, between one-half and five-eighths inches long, on my driveway. I tried to run one down but never got closer than three feet before it took off and flew about 10 feet ahead. After a few bursts of flight, it tired and made a quick, short flight into the grass.

A Cornell University entomologist learned that a tiger beetle can run at a speed of 5.6 miles per hour or about 125 body lengths per second. They’re considered to be the fastest land insects in the world.

Our local species, Cicindela sexguttata, is known as the six-spotted green tiger beetle and is found in deciduous woodlands from Minnesota to Ontario and south to Kentucky. We have seen a few that had eight white spots on their backs, but are included in the same species. They consume ants, aphids, lice, fleas, bugs, caterpillars and spiders with formidable, strongly toothed, sickle-like jaws.

These amazing beetles do have predators, however: dragonflies, birds, large spiders, robber flies and other tiger beetles. Most are nocturnal, but the metallic green one in our area is diurnal, hunting by day and enjoying sunlight. Adults often burrow into sand or loose soil at night and on very hot days. Some species live on bare, hard-packed ground; cultivated land; plowed fields and even along city sidewalks.

Their hunting technique of swift running, then stopping occurs because the beetles’ ability to see shuts down after it accelerates toward its victim. While moving so quickly, they don’t gather enough photons to form an image of their prey and have to slow down.

In general, tiger beetles are active and alert, recognizable by their big “bug eyes;” swift actions; large, pointed and very sharp mandibles; antennae arising from the top of the head; long, spindly legs that hold the body well off the ground; narrow thorax; and broad, almost oblong elytra.

Some tropical tiger beetles live in trees, but also along lakeshores, seashores, clay banks and woodland paths. They are especially fond of sandy surfaces and are lighter in color to blend with their surroundings.

The larvae live in vertical tunnels to a depth of two to three feet. Even as larvae, they are strong predators that wait at the top of their tunnels for unsuspecting victims, which they snatch with jaws similar to adults’ jaws and drag into the tunnel to consume.

There are about 2,600 species worldwide, in iridescent colors of blue, green, orange and red, but often gray.

Observe the six-spotted tiger beetles around your home or on walks along sunny paths on wooded properties. You’ll see that all that glitters is not always gold.