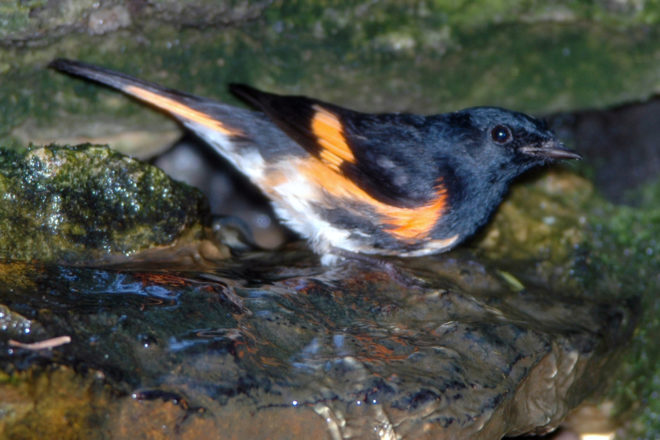 The brilliant male American redstart has deep orange and black colors once he reaches breeding age. Photo by Roy Lukes.

One of the most trusting and inquisitive songbirds that more people should come to know might rival even the American robin in numbers in our state. The male of this small, chickadee-sized bird has fooled many a novice birdwatcher into thinking they were seeing a miniature Baltimore oriole. Instead, they were seeing the American redstart.

The first summer when I was married and living in The Ridges’ Upper Range Light, I took a walk on the trails with binoculars and saw a small, black-and-orange bird and thought, “What a strange-looking oriole!” Not long ago, my niece, Jean, told me she had the same experience near her summer place in Southern Door.

Some call this bird “candelita,” which means “little torch.” The male is a glossy black with a white belly and bright-orange patches on his flanks, wings and tail. The female is olive gray, and the parts that are orange on the male’s plumage are yellow on the female’s.

Warblers in general are very flighty and may make birders feel that they would rather observe wildflowers or mushrooms that remain fixed in one position, rather than a bird that seldom sits still for more than a few seconds. However, many experiences with this flashy songbird have taught us that the redstart is frequently an exception to the “flighty warbler” rule.

When my late husband, Roy, and I led early-morning bird-watching expeditions at Whitefish Dunes State Park, we often saw American redstarts. They performed admirably by perching on open branches for extended periods, allowing everyone to see them well. One could have called the American redstart the “American people-watcher”!

What is so marvelous and downright accommodating about these scintillating creatures is that quite often, while perched, they droop and spread their wings and tails, further displaying their dazzling beauty.

It’s especially common for these butterflies of the bird world to be easily attracted to close viewing range by either making a squeaking sound by firmly kissing the back or your hand, or “pishing,” as many birders say. This supposedly imitates the distress calls of young birds, which, in turn, may attract adults of several species. American robins and catbirds are among the species that quickly respond to this technique.

One must have very good hearing to pick up the redstart’s thin, high-pitched songs, which are followed by a wheezy, down-slurred note.

Probably no other North American warbler has the extensive breeding range of the American redstart, extending from throughout much of Canada, as far north as St. James Bay (Hudson Bay), south to nearly the Gulf of Mexico. In Wisconsin, they appear to be very partial to the northern forest – with its maple, hemlock and pine trees – and especially those woodlands bordering bodies of water.

We have found them nesting in all of the state parks in northeastern Wisconsin, with a noticeable abundance on Washington and Rock Islands. One summer a friend showed us an active redstart nest in a clump of thimbleberry canes at about waist height. Roy photographed the female carefully and was amazed at how tolerant she was, never leaving the nest.

Studies show that redstarts prefer to build their nests in small, two- to three-inch saplings, including maple, birch, alder, ash, oak and willow, and usually in the first crotch, anywhere from two to 10 feet above the ground.

Males can be polygamous and may mate with another female in a new territory as much as a quarter-mile away. This often does not begin until his first mate has built a nest, laid eggs and begins incubating them.

The redstart’s diet consists of bugs, moths, flies, caterpillars, beetles and other small insects. Later in summer, they eat small fruits such as serviceberries and wild grapes. The closer American redstarts nest to each other, the more frequently they sing and display.

The young males have gray and yellow plumage into their second year and don’t breed until the following spring, when the black and orange feathers develop. What appears to be females singing may be young males from the previous year’s brood.

A bird-banding friend trapped and banded a redstart in Manitowoc on September 5 one year, and it was recovered by another bander in northeastern Ohio on September 22, which means that particular bird flew more than 400 miles in just 17 days.

We should be very thankful to have these magnificent, flashy warblers nest so commonly in Wisconsin every summer.