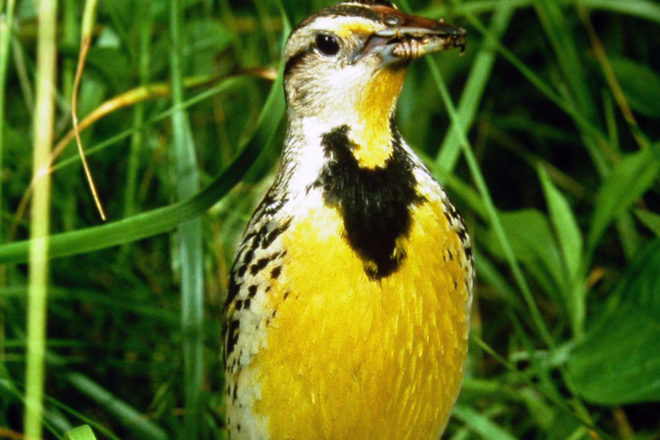 During the early years of our married life, my late husband, Roy, and I worked together doing a breeding-bird survey for the federal government. It had to be run all in one morning during a strict, six-week period from late May to the end of June.

The 24.5-mile route that was assigned to us was the same each year, and it had to begin one-half hour before sunrise. Roy would get out of the car, watch and listen for all of the bird species that were within a quarter mile of where we were for a period of three minutes. I would record each species that he called out to me. Then we would drive quickly to the next stop a half mile away and repeat the procedure.

The beginning of our route was in Kewaunee County, a bit west of Rio Creek, and it ended near Little Sturgeon Bay. The surveys started so early in the morning because during breeding season, birds were singing, attracting mates and actively protecting territory as soon as it was light. By 9 am, much of the singing had ended, and the birds would rest, eat or preen their feathers.

One of the most thrilling moments I remember was at the start of the route: sitting in the car with the window rolled down and hearing a western meadowlark singing its magical, descending, warbling song on a fence post only 10 feet from the car. That was one of the finest bird songs I’ve ever heard.

The Breeding Bird Survey (BBS) began in 1966 with routes in the eastern U.S. and southeast Canada. By 1968, it had expanded to all of continental North America north of Mexico. The U.S. Geological Survey’s Patuxent Wildlife Research Center in Maryland is in charge of handling this annual breeding census, and Environment Canada manages the 1,000-plus routes in that country. The most recent data, from 2018, show that 3,291 BBS surveys were turned in. Wisconsin has 92 routes.

A friend saw a meadowlark in southern Door County on January 26. It was reported as a western meadowlark. The eastern and western are very similar, and we usually depended on the song to distinguish the species because they’re difficult to identify from a distance. The eastern has become the predominant one in Door County during the past 20 years.

Carl Linnaeus first described and listed the eastern meadowlark for North America in 1758. In a later nature notebook, he grouped this species with the starlings into the genus Sturnus. By 1816, a French ornithologist moved all meadowlarks with a yellow breast and throat into a new genus, Sturnella.

Male meadowlarks have two mates at the same time. The female nests in fields and frequently has a slight grass covering over the nest. She does all the incubating, brooding and feeding of the young.

The song of the western meadowlark is a rich, mellow, descending warble that stops abruptly. The eastern sings with a higher-pitched, smooth, piercing whistle. It is lightly wavering and not as joyful as the western’s song.

Roy kept records of the number of westerns he heard during his breeding-bird surveys from 1970 through 1974. They were 54, 70, 50, 73 and 71, respectively. The easterns during those same years numbered 20, 28, 19, 28 and 25, respectively. We did that BBS route about 20 years later, just to compare the stops, and we heard mostly eastern meadowlarks.

We have had a meadowlark reported during some of our Christmas bird counts, both north of Sturgeon Bay and in Southern Door. Records from the spring season, March 1 to June 1, show that meadowlarks have been seen before the first date in six of the years since 2002. The latest record of a first sighting was March 26 in 2005 and 2015.

Meadowlarks, with their long, strong, cone-shaped, pointed bills and flat foreheads are related to red-winged blackbirds, orioles, grackles and starlings. One inspection of the many types of injurious insects that this nervous, tail-flicking bird eats should convince farmers that they’re extremely valuable friends to have around.

These birds fly low and straight with rapid wingbeats, flapping, then sailing, flapping and sailing. They have a tendency to choose high perches from which to sing. Their jerky walk on relatively short legs is much like that of their relatives.

The best areas to see these birds are the county’s remaining open grasslands, where you can watch for low-flying, drab birds with white outer tail feathers that provide a good field mark to look for as they fly away. And try to listen for their songs – most likely they will be eastern meadowlarks.