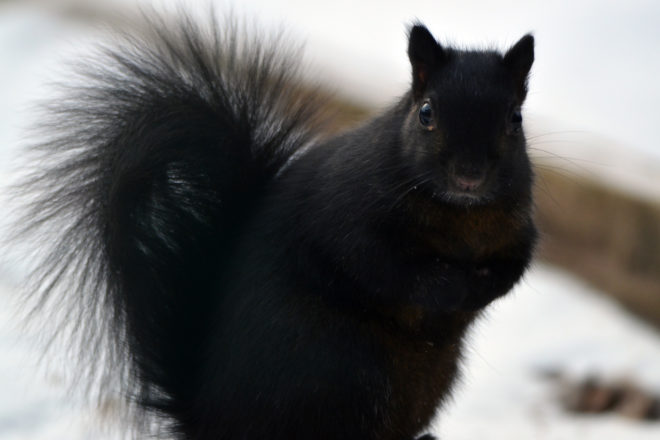 A melanistic gray squirrel visited our yard in 2001 and posed for a photo on our deck rail. Photo by Roy Lukes.

I was driving along County Q in Ephraim recently when a black gray squirrel ran across the road in front of me. It made me look twice to be sure I was seeing straight. We had one of these unusual animals in our yard in the spring of 1995 and again in the winter of 2001.

Melanism is an unusual development of dark color in the skin and is the
opposite of albinism. The word “melanism” comes from the Greek for “black pigment.” Adaptive melanism is inherited and helps certain species to be camouflaged in some environments, such as a black panther hunting at night. Throughout the 47 years that I have lived in Door County, I can remember observing only a few instances of partial or total albinism in creatures, and most were wild birds. On one occasion, friends called from a home northwest of Sturgeon Bay to say they had spotted a fledgling albino robin. Its eyes were pink – a true albino – and it was the second year in a row that these people had one in their yard.

The pink eyes of a true albino are only apparent, though, not real: The pupils only look red because of light that’s being reflected by blood in the unpigmented choroid within the eyeball.

Parents of albinos are often consanguineous (blood) relatives, so perhaps the parents of the baby albino robin that my late husband, Roy, photographed near Sturgeon Bay in June 1981 came from the same brood in a previous year. Chances are good that the parents of that baby were also the parents of the prior summer’s albino because robins frequently return to the same yard to nest. Albinism is a recessively transmitted phenomenon, so when it appears, it does so, on average, in one out of four offspring born of apparently unaffected parents. Both parents and the unaffected youngsters nevertheless carry an albinism gene that has no detectable effect by itself.

The albinos of the Norway or brown rat and the house mouse are the selectively bred strains of commercial white rats and mice that are used extensively in biological research.

Roy saw his first pure albino when a totally white starling flew with a flock of normal starlings. I remember seeing an adult albino eastern kingbird catching insects on a quiet country road, and we have also seen a blond American goldfinch with dark eyes and just a hint of light tan feathers on its back. We received phone calls from several people who saw an albino evening grosbeak in a large flock in March, and it was a lucky day when it found our feeder. It was a partial albino female with dark eyes, a creamy white body and a wide band of light-yellow feathers across her shoulders.

Leucism is the term now used for partial albino birds and mammals. This
genetic condition causes faulty pigment cells that partially affect most parts of an animal’s body, but the eye color of creatures affected by leucism is normal. It differs from albinism, which is a lack of melanin.

Other coloration oddities in animals and birds are erythrism – an excess of red or orange pigment – which can also occur in insects. Xanthism is an overabundance of yellow pigment, which we saw in a female red-bellied woodpecker that came to our feeders in February 2005. All the parts that were supposed to be red were yellow. Axanthism is the absence of yellow pigment, which causes some creatures to have abnormally blue color. Years ago, there was a hairy woodpecker at our feeders that had blue in the feathers that were normally white.

Melanism is more common than all of these other strange color variations except albinism. It was in January 2007 that Roy photographed a family of black red squirrels near Cana Island – the first incidence of seeing true red squirrels in the melanistic phase. More gray squirrels – like the one I saw on County Q – are melanistic than red squirrels.

Slow down to observe the wildlife in your yard and surrounding land – you may see more of these unusually colored creatures that share the world in which we all live.