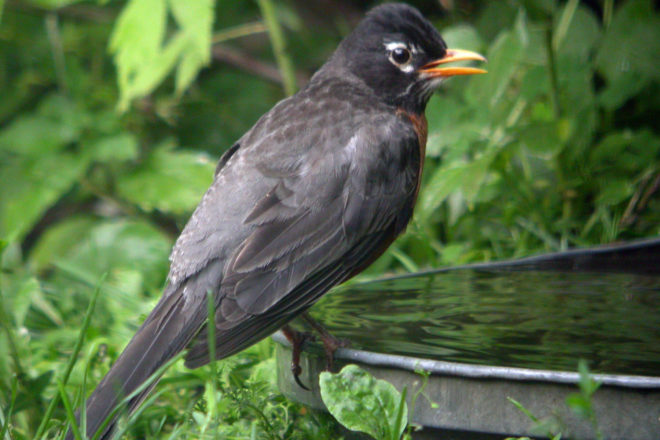 This male robin has a black head. A female’s head is dark gray like her body. Photo by Roy Lukes.

One of the most widespread native breeding birds in North American nests in all 49 of our continental states and every Canadian province is viewed by many as the harbinger of spring. You guessed it: the American robin.

A recent email from a friend in Baileys Harbor asked about a robin she’d seen in a tree in Jacksonport in early January. She wondered whether it was the last robin of fall or the first one of spring.

Because robins nest in Canada from the Atlantic to the Pacific and as far north as the shores of the Arctic Ocean, it stands to reason that the most northerly breeding birds are not going to migrate as far south as the robins that nest in Wisconsin.

These late-migrating robins obviously found the Upper Midwest’s autumn bounty of fruits and seeds to their liking, and this super abundance of natural food helped to sustain them until the sudden cold and snow covered the land.

Generally most of Wisconsin’s robins leave to fly south by mid-November and don’t return for nesting until late March or into mid-April. While here, their food may include approximately 60 percent vegetable and 40 percent animal material.

If you wonder how you can help the wintering robins when a deep layer of snow covers the ground, you can help by putting out food that’s quite small, such as the diameter of a small pea. We’ve seen them eat cracked corn that’s scattered on the ground or on a platform feeder.

Robins must obtain food containing some protein and fat in order to survive. Unlike woodpeckers, which can successfully hack away at the frozen Marvel Meal, robins have beaks that are not designed to do the same. Some people scatter ground beef, hard-boiled egg yolks or dog-food pellets – all broken into small pieces – on the ground where they’ve seen robins feeding.

Not many people know that it was the early English colonists in America who gave this bird its name. These strangers in the wilderness, perhaps out of homesickness, were probably trying to see similarities between their plants and animals back home and the ones they’d observed in their new land.

Upon seeing this 10-inch, red-breasted bird, the bird that came to their minds was the European robin. Back home, that five-and-a-half-inch bird with a red throat and upper breast was a fine singer, but that’s where the resemblance stopped. There’s a world of difference between European and American robins.

Had these early English settlers in North America looked closely at this “red-breast,” they would immediately have seen their native European blackbird, Turdus merula. This bird – outside of the fact that the male is solid black with a yellow bill – looks, behaves and even sings like our Wisconsin state bird, the robin. Turdus, the genus name for our robin, is Latin for “thrush.” And the species name, migratoris, is self-explanatory.

I believe that a lot of people, while watching robins return to their yards each spring, wonder whether these are the same birds that were there last year or during prior years, and even whether they’re the young that were raised in their backyards during the previous summer.

After studying the nationwide banding returns of robins, Professor Joseph Hickey of the University of Wisconsin found that about three-fourths of the returning robins settled within 10 miles of their original home.

The first robins you’ll see this spring will all be males, with darker heads than the later-returning females. Some will fight viciously to secure their territory. It’s been said that a robin’s number-one enemy is not a hawk or a feral cat, but a rival robin seeking what the first is protecting: food, a good nesting site and a mate.

Now if you see a robin during the winter, you’ll understand why it’s here and realize that not all of them go as far south as our native birds. Let’s hope this coming spring will be warmer and not as snowy as the past few have been.