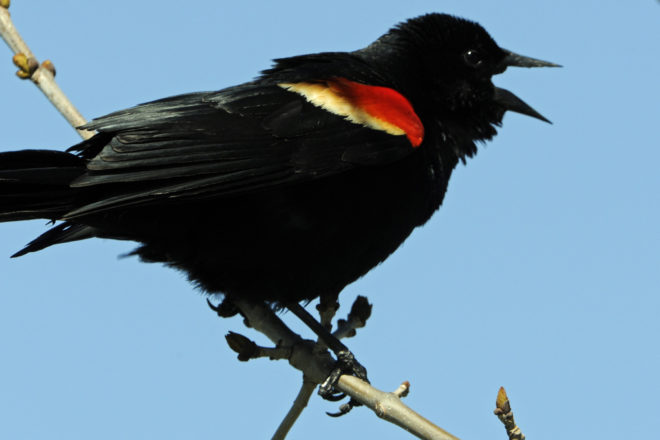 A male red-winged blackbird shows the brilliant wing patches that give him his name. Photo by Roy Lukes.

Blackbirds are not appealing to the average birder. They are considered a nuisance, especially if you approach their nest sites. The male flies at you with his sharp claws and beak to drive you away. We used to have red-winged blackbirds dominate our bird feeders and prevent access by other birds. Their piercing calls were not a delight either. Now I seldom see any in my open woodland.

Members of the blackbird family, Icteridae (ik-TARE-eh-dee), include several types of blackbirds, as well as grackles, cowbirds, meadowlarks, orioles, bobolinks and dickcissels.

The red-winged blackbird is the most common and easily identified by the brilliant red shoulder patches extended when the male sings. Female red-wings are very different: not solid black, but with streaked plumage, and barely any red at the shoulders.

Their range is throughout North America, wintering in the southeastern states. My late husband, Roy, and I often waited to hear the male’s “oak-a-ree” call as a sign they were back here in the spring.

They prefer to nest in the dense vegetation of marshes, swamps and wet meadows. Their diet is mainly insects and weed seeds. Once breeding is finished, red-wings gather in large flocks and may graze in agricultural fields. They eat some grains, but they often snack on larvae, worms and caterpillars of many injurious insects.

Brewer’s blackbirds are most common in the western part of the continent, but they have been moving their breeding areas to the east as far as central Michigan. They are entirely black, with no red or white in the wings. Males have yellowish-white eyes, and females have brown eyes. Out west, they can be seen in towns and have adapted to human population areas.

Breeding areas in Wisconsin appear to be from the central agricultural areas up to the north, where some agriculture is still present. Fields and grasslands are places they prefer to hunt for food, mainly insects, and they have been known to nest in large colonies. Studies show that their numbers have been declining during the past 30 years. I remember seeing them regularly in Door County back in the 1980s and ’90s, but I rarely find them now.

Rusty blackbirds nest sparsely across all of Canada in bog environments and spend the winter in southeastern states. We occasionally see them as they travel through the state during migration, but their numbers, too, have been declining.

Their plumage is dull black, and they have yellow eyes. The rusty plumage is seen on females and on the birds in autumn.

The largest of this group is the yellow-headed blackbird, at nearly 12 inches. This species is most common in western America and Canada. They prefer to nest in wetlands with permanent water that is several feet deep, rather than in shallow ponds. The deeper water tends to keep predators away.

There’s a hardy nesting population in the Horicon Marsh and along the west side of the lower end of the Green Bay waters. Once in a while, a single male is seen in Door County for a few days during the spring migration, as if it had overshot its destination. However, one confirmed nesting of this spectacular blackbird was found near Little Sturgeon Bay during the first Atlas of Breeding Bird work in the late 1990s.

The male is black, with a brilliant yellow head and breast, and females are a bit more subdued in color.

I remember a trip that Roy and I made in southern California to the Salton Sea in the spring of 1982. That area had numerous yellow-heads, and hearing their raucous calls was fun. W.L. Dawson gives a description of the male singing: “… he succeeds in pressing out a wail of despairing agony which would do credit to a dying catamount (mountain lion). When you have recovered from the first shock, you strain the eyes in astonishment that a mere bird, and a bird in love at that, should give rise to such a cataclysmic sound!”

Years ago, Roy was bird-watching along the Wisconsin River at the Petenwell Flowage. He had his spotting scope and was viewing a huge mass of cattails on the opposite side of the river. Those fishing nearby wondered what he was watching, and when he said, “Yellow-headed blackbirds,” one said, “What?”

One man said, “Yellow-headed blackbirds? I’ve been fishing here for over 25 years, and I’ve never seen one! You sure you know what you’re lookin’ at?” Within a few minutes, Roy had a dozen fishers standing in line to use the scope to see the birds. He never imagined he would turn a group of anglers into bird-watchers.