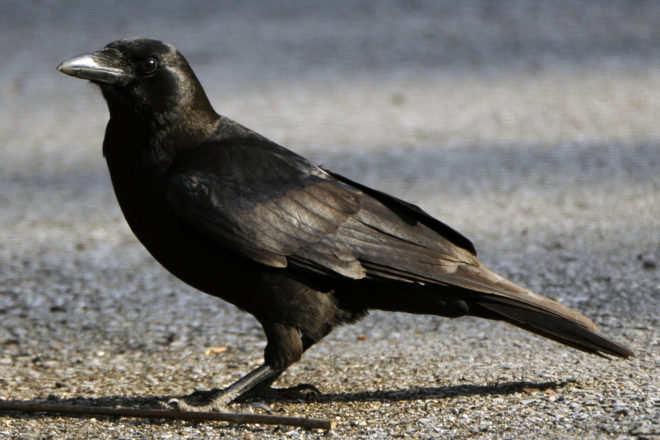 This sleek crow enjoys bits of cracked corn on our driveway. Photos by Roy Lukes.

Do you know what a chrysanthemum or delphinium or a trillium is? Most would reply that they are flowers and those are the actual scientific genus names.

Could you identify a Corvus brachyrhynchos? It is the scientific name for the American crow. Many people are familiar with some of the taxonomic genus names of flowers, but few can tell what the scientific name of a bird is unless they are avian specialists.

We rarely call birds by their taxonomic Latin or scientific names. We learn the common names because that is what is used by most amateur birders. The birds in the Corvus genus that are found regularly in our area include the crow and raven.

Other species in the Corvid family are jays, magpies and nutcrackers. Blue jays are the most common member of the group in Door County and Wisconsin. You will find the gray jay in a few counties of the far northern parts of our state. It is sometimes referred to as the Canada jay since it can be found throughout that country and up into Alaska.

Magpies and nutcrackers are typically western American birds but the black-billed magpie can venture into parts of far northwestern Wisconsin. In fact one landed in a friend’s yard near their bird feeders and he got two photos of it last June. His home is near the Green Bay shore close to Little Sturgeon Bay. That may have been the first ever sighting in Door County. The Wisconsin checklist considers the black-billed magpie as “casual,” meaning there is one report every one to five years. 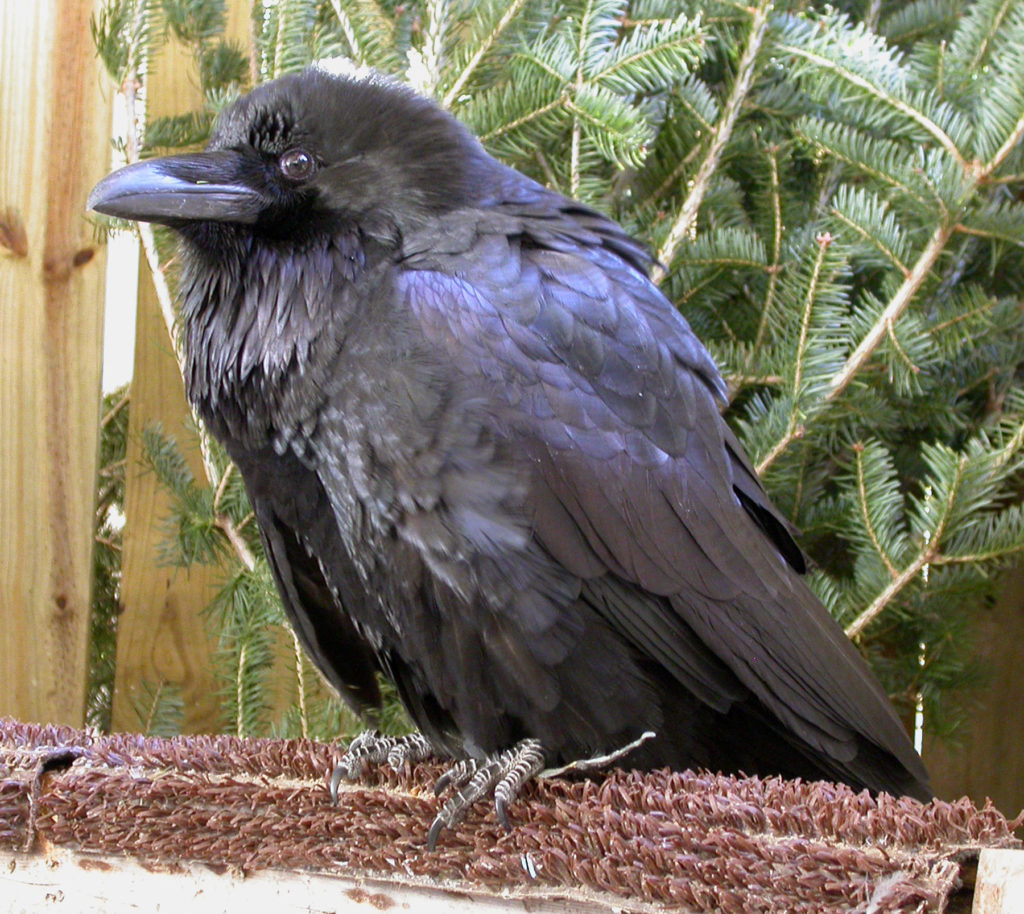 A captive raven shows its large head, heavy beak and ruff of feathers at its neck.

The Clark’s nutcracker is a resident of the conifer forests in the western mountains and is even less likely to be seen in our state. In fact there are only four records of sightings in Wisconsin since the start of record keeping. One of the joys of birding is discovering rare species that are out of their normal range.

The common raven is an early nester in Door County. I remember when this species was only a winter visitor. That was back in the 1970s and Roy would hear them along the Lake Michigan shore at Toft Point from November into March. They would scavenge for dead fish or ducks along the shorelines and could utter some weird croaks and guttural calls that hardly seemed to come from a bird.

Roy and I were doing a breeding bird survey of the private lands of Marshall’s Point near Lake Michigan east of Sister Bay one spring day, perhaps 35 or more years ago. We heard and then saw the first nest of ravens ever recorded for Door County. Up until that year they were always considered just winter visitors. Now they are quite common in many parts of the county in all seasons.

Ravens begin their breeding earlier in the year than crows. Three to six eggs are laid in a nest that is two to four feet wide, sometimes as early as mid-February, and will be incubated for 21 days. The hatchlings stay in the nest for 35 to 42 days before taking their first flight. It was in late April 2006 that Roy was alerted to a raven nest in Peninsula State Park. He was able to photograph the large youngsters clamoring for food on a high rocky ledge.

We have been shown other raven nests, one in the Ephraim area where the young were high up in a large white pine. They are intelligent, resourceful and crafty birds and know how to choose nest sites that are extremely safe from predators, including people. Large sticks make up the bulk of the nest, with smaller twigs and sometimes grape vines intertwined. The nest is deeply hollowed and lined with grasses, moss, animal hair and shreds of bark. Sometimes they will build on top of last year’s nest.

The American crow will nest in deciduous as well as coniferous woodlands and usually places the structure in a crotch or on a supporting branch near the trunk. They can be anywhere from 10 to 70 feet high in the tree. The nest is around two feet wide. The inside diameter is around six to nine inches across and lined with moss, grass, fur, feathers, roots and leaves.

Three to eight eggs are laid, in a normal spring, as early as April and will be incubated for about 18 days. The young will stay in the nest for about 25 to 35 days before trying their wings. They can have two broods, especially in the south.

We are fortunate to live in the rural part of Door County where we see and hear both the crows and ravens. Seen from a distance both are large black birds and are difficult to tell apart. The raven’s six to seven inch extra length does not make it easy when further away. Their flight has a slower wing beat and they glide more than crows do. The one feature that is a distinct identification mark is the shape of the tail in flight. A raven will exhibit a diamond shaped tail while the crow has a squarer end to its tail. 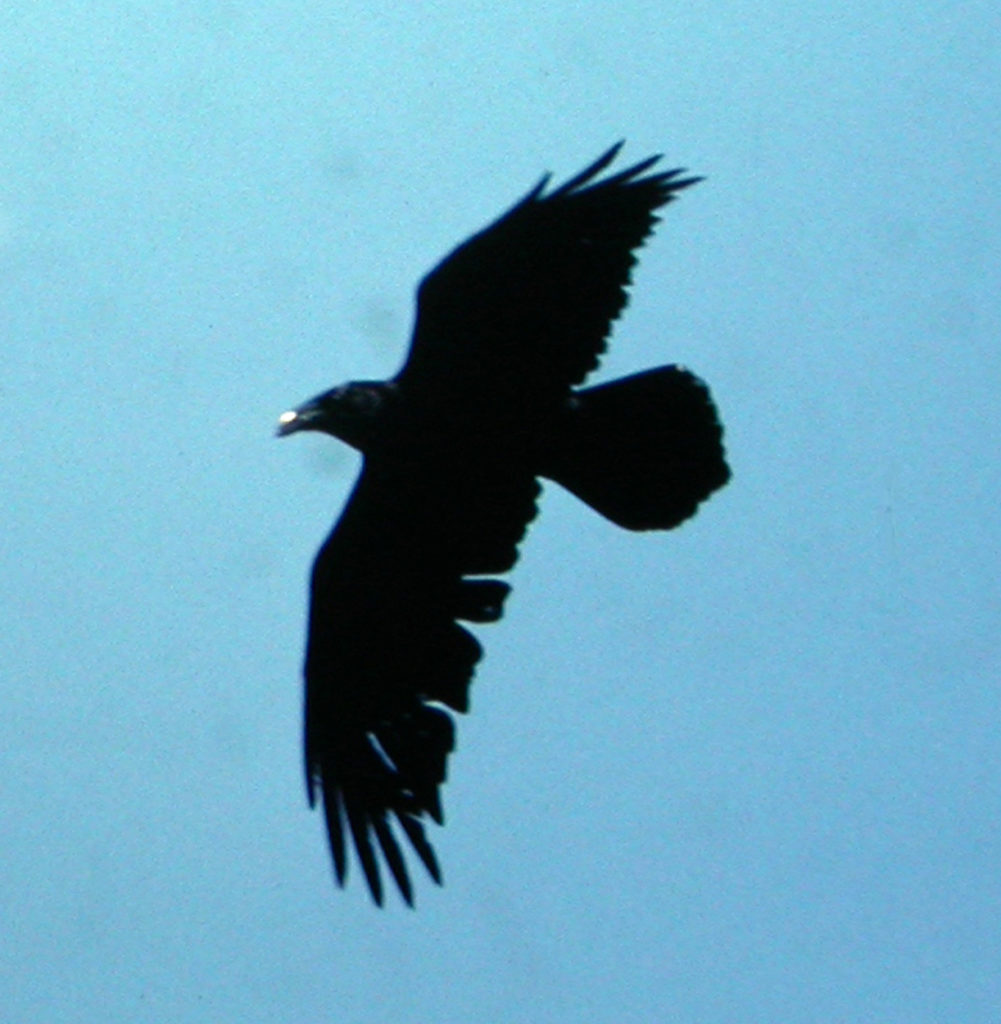 A raven in flight has a tail in the shape of a diamond.

Study these omnivorous birds with the cast-iron stomachs and you will be quite amazed at the wide range of food they consume, including many extremely harmful insects. Surveys done across several years have found nearly 650 different items of food in their diet, ranging from various insects such as June bugs, grasshoppers, grubs and weevils. They are also known to eat other birds’ eggs and tiny nestlings. When this happens early in the breeding season the smaller birds will re-nest and try again.

You will often see large flocks of crows, perhaps as many as 40 to 50 birds. You will not see that same situation with ravens. They tend to stay in a small family group and will not associate with a mass of crows.

The raven is considerably larger and has a four-foot wingspan. Their slower flapping and ability to soar can be compared to the faster wingbeat of the crow, with a pattern as if it were rowing a boat. When seen in profile flying nearby I have noticed that the head and beak of the raven tend to tilt slightly downward, reminding me of the giant Concorde jet plane of the 1980s.

A raven’s beak is heavier and it has a dense ruff of feathers on the throat. The crow is a bit sleeker in profile. Both have benefited from the presence of humans, in a way, as they are great carrion eaters. You will often see crows, and less often ravens, eating roadkill animals that we hit with our vehicles.

A famous U.S. clergyman of the 1800s, Henry Ward Beecher, said that if man could be feathered and winged, very few would be clever enough to be crows! Anyone who has had a pet crow – downright mischievous in many ways – surely will agree to this claim.

Roy often said that one of the last creatures left on earth will be the crow, subsisting on what has been destroyed. Let us appreciate these gleaners of roadside waste and salute the Corvus species for cleaning up the landscape.