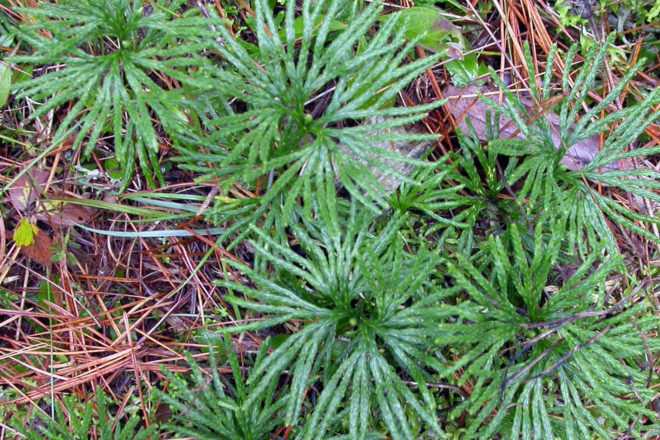 A friend asked about some low-growing green plants that we saw on a recent walk with our hiking group. This time of year, most of the landscape is brown and seemingly dead, but there’s still a family of small, interesting evergreen plants to watch for: the clubmosses. Most people connect the word “evergreen” with the trees we know as pine, balsam, spruce, white cedar and hemlock.

Instead, the plants I’m referring to are the running, shining and stiff clubmoss; the ground cedar; and the ground pine, sometimes called princess pine. Other related plants are the tiny spike mosses, aquatic quillworts and horsetails – what a good field guide calls “fern allies.”

All North American clubmosses are nonflowering and reproduce from spores rather than seeds. Like some of their relatives, such as the ferns and horsetails, their spores do not develop directly into new plants. Instead, they develop into male and female plants that are almost microscopically small. These, in turn, unite and grow into mature clubmosses through a fascinating growth process called the alternation of generations.

The microscopic spores produce a tiny, bisexual gametophyte (ga-MEE-tow-fite) in the soil, which can take seven or more years. Then the gametophyte develops for 10 more years to become the nonsexual clubmosses that we see covering the ground.

Some of you may know the princess pine, which is one of the clubmosses. Several species resembling miniature pine trees could pass for the princess pine, including the running ground pine – also referred to as running clubmoss – and the flat-branch ground pine. The reason we prefer not to use the “princess pine” name is that there’s a very handsome, little flowering plant – quite common in the northern mixed hardwoods – called prince’s pine. You can see how easily the two could be confused.

Years ago, spores of clubmosses were very laboriously gathered in quantity and sold as lycopodium powder. Lycopodium (ly-co-PO-dee-um) – the Greek word for “foot” – is the generic name of this small group of plants. The powder is highly flammable because of its finely divided oil droplets. It was used to manufacture fireworks, for flash photography, to coat pills so they wouldn’t stick together, to lubricate surgeons’ rubber gloves and as an antiseptic dusting powder and wound dressing.

There are only about 13 species and about the same number of subspecies on the North American continent, and about 100 species worldwide. Wisconsin is fortunate to have nine species and several subspecies. Although some are called ground pines, they’re not even remotely related to pines. All pines are woody and reproduce by seeds, whereas clubmosses have no features that are anything like the trees. However, they do produce dense ground cover in conifer forests because they prefer acidic soil.

The five species that we see in area parks such as Newport and Whitefish Dunes, where these plants are quite common, are the stiff clubmoss, shining clubmoss, running or “wolf paw” clubmoss, ground pine and ground cedar. The last one gets its name because of the similarity of its thin leaves to those of the white cedar tree.

For many years, these two species – especially the ground pine – were picked in great quantities during the late fall to be made into green holiday wreaths. Those who make use of them most often merely pull them out, roots and all, so because this plant is extremely slow growing, one yank destroys about 30 years’ growth. In some woodlots, all traces of clubmosses have been completely eradicated. Instead of pulling them, consider learning about them, enjoying them and letting them grow.

One of my goals is to lead as many people as I can into understanding and appreciating native wildlife and plant life. Only through this approach can we be assured that members of future generations will also be able to rejoice in their awareness of the plants and animals that share this earth with us, including the small forest of clubmosses at our feet.