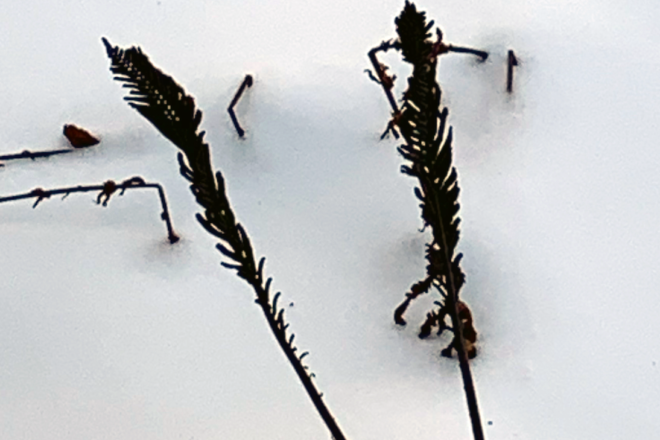 Two spore-case stalks of the ostrich fern come up through the snow. Photo by Charlotte Lukes.

The thin covering of snow so far this winter is allowing some plants to show their seed structures above the surface. Often they go unnoticed prior to winter because they blend in with the other plants and woodland debris on the ground.

The conspicuous remains of many plants are a pleasant reminder of the forthcoming descendants and the much-awaited green of spring. Diverse forms of dozens of plants are readily identifiable – some even when viewed from a moving vehicle.

Another plant that thrives along streams and in the rich soil of wet, shrubby ditches is the prickly or wild cucumber. This decorative, but inedible, high-climbing annual – a relative to the squashes – is sometimes called the wild balsam apple, and its prickly, oval pods are very distinctive.

Millions of tall Queen Anne’s lace seed heads stand along roadsides and in fallow fields. The dried flower head looks like a bird nest on a stick. The common milkweed is another fairly tall plant scattered in fields. Some still retain their signature dried pods, perhaps partially releasing their silky seeds.

A favorite trail in Newport State Park takes hikers through a dense stand of ostrich ferns. The dark-brown, fertile fronds can remain upright and quite tall above the snow cover. The ferns themselves are more delicate and fall to the woodland floor, but these spore-bearing structures can stand well into the spring.

I looked into an online source for books and found that one of our favorites from many years ago – Pods: Wildflowers and Weeds in Their Final Beauty – is still available. It was written by Jane Embertson, who lived in a Milwaukee suburb, and it was published in 1979. The book has outstanding photographs showing the exquisite forms of the plants as found in nature, as well as how these same plant remains can be used in dried arrangements.

Picking dried plants at this season generally poses little risk to the survival of the species because frequently, seed dispersal has been completed by now. Just to be on the safe side, however, follow the current regulations protecting certain plants, and avoid collecting in state natural areas and sanctuaries.

Dried weeds and wildflowers from last year remain on the landscape through a mild winter, as we have had through much of December and January. The bare branches of deciduous trees and shrubs decorate the fencerows and show their forms well now.

Occasionally we come upon small shrubs with red berries. It’s often difficult to identify them when all you see are bare stems, so use a good field guide – such as Newcomb’s Wildflower Guide by Lawrence Newcomb – to help you identify these fruiting plants.

Some winters, we would see large flocks of snow buntings or common redpolls flying together over the fields and then suddenly disappearing in the grasses. One of the plants that attracts these wanderers is the red-stemmed pigweed – fortunately, a very rigid plant that withstands the winds and snows of the cold season and remains upright.

I remember another year when we saw a huge flock of common redpolls feasting on the seeds of a long bank of chicory. Every time I see thousands of these lovely, blue-flowered weeds lining a country road in late summer, I can’t help but think of the many seeds that will feed the next flock of winter visitors from the north.

Small birds eating along the shoulders of the road are also picking tiny bits of gravel for their gizzards. This aids with digesting all the seeds they consume. One of the most frequently seen roadside weeds is the common ragweed, which is rich with seeds. It has been determined that there are at least 70 species of birds that eat these seeds, including the mourning dove, goldfinch, horned lark and ring-necked pheasant.

As I write this today, on Groundhog Day, one creature said we’re in for six more weeks of winter, and another said we’ll have an early spring. Let’s just enjoy nature – whatever the season – and take time to observe the remaining plants and seed pods of last summer.