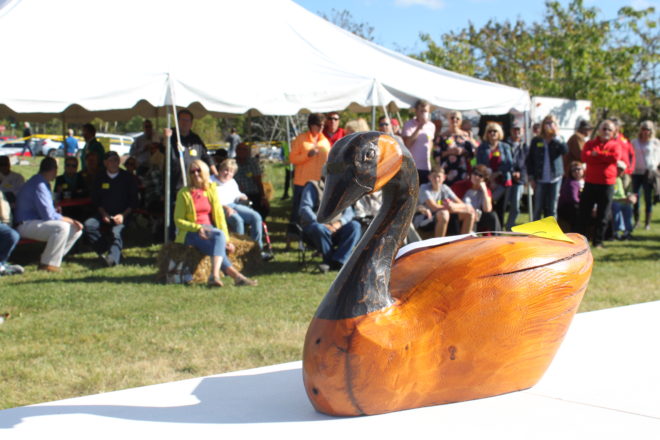 Repurposed Eagle Tower wood was auctioned off at the event, raising more than $20,000 for the reconstruction of the tower. Photo by Jackson Parr.

Two days after a public presentation by the Department Natural Resources (DNR) on design concepts for Eagle Tower, a fundraiser brought in $25,000 for reconstruction. The event, which included a live auction of repurposed wood from the original Eagle Tower, was the first opportunity the public had to own a piece of the structure.

At the public presentation of the design concepts at the Sturgeon Bay Public Library on Sept. 28, DNR officials stressed the images were rough depictions and should not be taken as final designs.

“I know it’s easy to get something in front of you and say this doesn’t look anything like [the original tower],” said Ben Bergey, director of Wisconsin Bureau of Parks and Recreation. “These are concepts. That’s a quick rendering of what we know is structurally possible.”

Bergey and DNR capital development coordinator Missy Vanlanduyt explained the goals the design concepts had to meet, including compliance with the Americans with Disabilities Act (ADA), use of new technologies, use of alternative energy, low maintenance and a budget between $500,000 and $1.5 million.

Although the costs for each design came in higher than expected, with totals between $1.65 million and $3.3 million, Vanlanduyt said the concepts did meet all of the design goals.

The most contentious of those goals is ADA accessibility.

“We have two sides to the access coin,” said Vanlanduyt. “One being the law and the other being the social piece of things. We follow the law and we wanted to do the right thing. We wanted to provide a recreational opportunity that could serve the public and regardless of your age or ability, access this recreation opportunity.”

Representative Joel Kitchens said he had a hard time accepting the ADA requirement, but eventually agreed that they would not be able to avoid full access.

“DNR attorneys came back and said, to meet the ADA requirements, disabled people need to have access to every piece of this,” said Kitchens. “I was in denial with that. I had the legislative council look into it and they came back and reaffirmed that.”

Kitchens added that the DNR was simply trying to avoid a possible lawsuit if the tower was not fully accessible and, being a federal law, the state has no power to exempt the structure.

To provide an elevator, as in Option A, the DNR would need to run electricity to the tower site from Hwy 42 near the Peninsula State Park Golf Course, which makes up a significant cost for the $3.3 million structure. DNR officials determined that burying power lines would be possible despite the impact to the landscape.

While final cost and fundraising will determine the height of the tower, a ramp used in Options B and C would likely be between 600- and 900-feet long at a grade of 4.9 percent, given ADA standards.

Should the Eagle Tower fund reach its goal, $1.5 million will be made available for reconstruction of the tower. Although all of the cost estimates provided with the three design concepts are more than $1.5 million, Eagle Tower Fund campaign director Rachel Stollenwerk said the DNR will work with the Friends of Peninsula State Park to fill the funding gap, depending on the design concept chosen and the final cost.

The public is invited to submit comments on the design concepts until Oct. 9. Vanlanduyt expects a design concept will be chosen in November.

To take the survey, visit surveymonkey.com/r/DNReagletower.