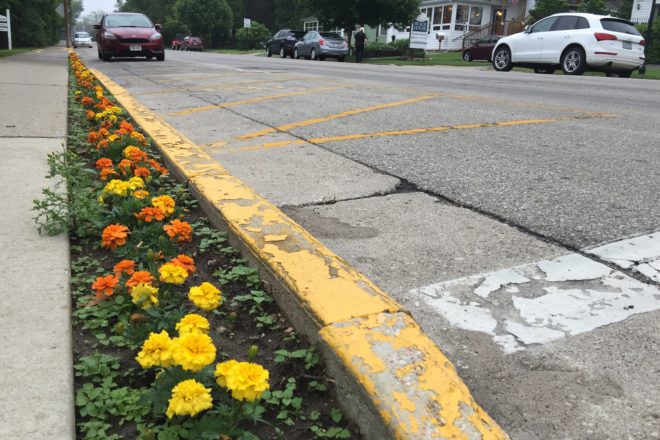 Fish Creek’s sidewalks have been lined with marigolds for over 40 years. Photo by Myles Dannhausen Jr.

For four decades they’ve lined the streets of Fish Creek, providing a subtle but colorful buffer between the bumper-to-bumper traffic and the shaded sidewalks of the village. The orange and yellow marigolds provide a sliver of life in the concrete, but how did it start? After all, highway designers aren’t known for their use of color and green space.

John Fairchild, one of the Town of Gibraltar’s (which includes Fish Creek) two maintenance employees, said the town started planting the flowers in 1970 or 1971, when his father Gordon was the town’s maintenance man.

“They left a gap between the sidewalk and the curb when they did the curb and gutter in 1970,” Fairchild recalled. “I don’t know whose idea it was, but it was designed for a strip of flowers.”

They tried petunias first, but they weren’t tough enough to last.

“They switched to marigolds because they’re more hearty,” Fairchild said. “They handle the weather a little better, and can take the beating from people stepping on them and still look good.”

The flowers are usually planted by Memorial Day, but sometimes the weather pushes it back, like this year, to early June. Until the late 1980s, the town put the planting out to bid, but after a few years of shoddy work, the town started handling the planting of the roughly 3,600 flowers itself.

“Since 1989 or so, my family has had their hands on it every year,” Fairchild said.