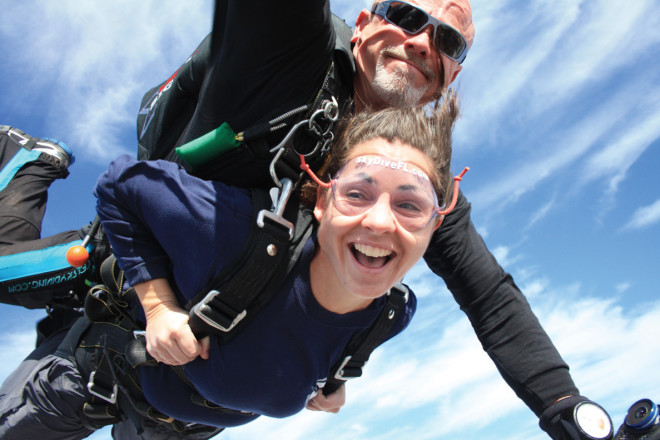 On a sunny day with low wind, the plane ascends to 11,000 feet. You’re harnessed and hooked to the tandem master. The gear – harness, hooks, and parachutes – rank right up there with military grade hardware. The plane door opens, and you prepare to jump. 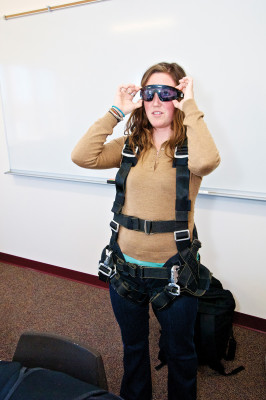 The freefall – that’s the most exhilarating part. Maybe you summersault a couple of times, or spin. For around 45 seconds many people scream, swear and smile. You might remember that you’re supposed to arch your legs backward, like a diving birdie.

You and your instructor are wearing an altimeter, which is a barometric device that measures air pressure. The instructor guides your hand back to the ripcord at around 5,000 feet. You pull it. Woooosh. The parachute opens and you are quietly gliding over the Door Peninsula. Great expanses of water stretch before you: Green Bay, Lake Michigan, the Sturgeon Bay canal. Washington and Rock Islands are visible in the distance.

The whole experience lasts four to seven minutes, depending on how much you pull around the parachute, or flap your newfound wings.

“I like to involve our divers in the whole experience, rather than it being like a carnival ride,” said Michael Wadkins, owner of Skydive Door County with his wife Mercedes. “How cool to be able to say, ‘I went skydiving at 11,000 feet and pulled my own parachute!’ That said, if you miss it, obviously I’m going to get it, because I have plans to see my beautiful family at the end of the ride.”

Prior to being a skydive instructor, Michael jumped out of planes as a paratrooper in the military for nearly 12 years. At the beginning of his service, he was constantly being moved from one duty station to another, and he had trouble getting his paratrooper certification through the military. To circumvent this, Michael went to skydiving school in Germany. From an early age, he knew he wanted to join the commune in the sky. 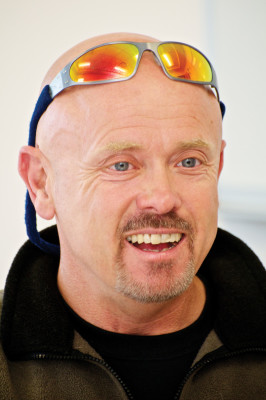 “My father was a recruiter for the military,” Michael said. “I was about eight years old, and he took me to a football game. The United States Army Golden Knights skydived in. I thought it was the most incredible stuff I’d ever seen in my life. It impacted me. After that, I wanted to experience it.”

The army made skydiving a somewhat tedious job, and Michael eventually tired of the military lifestyle. He took up teaching in order to share his passion for skydiving. Now he loves going to work.

Mercedes, who lived on Washington Island as a kid, and later vacationed back and forth between Florida and Wisconsin met Michael in North Carolina 13 years ago.

“My father skydives,” Mercedes explained, “When I decided to learn how to skydive, my parent’s said they wanted the best instructor possible…and that’s how I met Michael. But he wouldn’t date me until I graduated!”

The move back to Door County grew out of the desire to be near Mercedes’ family and to build a business that allowed Michael to be home more often. At the time, Michael was traveling around the world teaching instructors how to teach skydiving – a teacher’s teacher.

“I got tired, and being away from my beautiful wife and little girl…we wondered how we could do what we love and make a living, and be in Door County,” Michael said. 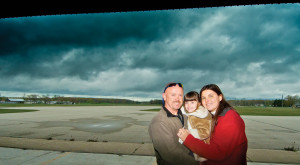 Mercedes noticed an increased interest in adventure sports in the county. With the amazing views that skydiving offers, she believed people would be interested in experiencing something different.

Since opening three years ago, many people have taken their first dive with the Wadkins – locals and tourists alike. And, skydiving isn’t just for young people. They’ve taken young adults, but have also dived with people 50 to 60 years old. Their oldest client was 72. They have had some memorable moments in the last couple of years, including a proposal.

“He wanted to propose during freefall. With two tandems, that’s kind of challenging. Right before the dive, he said, ‘Hey baby, I love you, will you marry me?’ She’s freaking out, the door’s open; she’s yelling ‘Oh my god! Yes!’ and then they’re flying next to each other…he got down to the ground first. He’s on one knee, and Mercedes ran out there with the ring. I landed her right in front of him and he proposed. It was pretty cool stuff. We’re hopeless romantics, and that’s how I proposed to Mercedes, so we love to do stuff like that.”

People who skydive are taking a risk, Michael confirmed. Like anything you do in the extreme sports industry, it’s possible to get hurt. However, the Wadkins minimize the risk by having a diver jump with an experienced instructor, brand new equipment, and a close adherence to the rules and regulations of the United States Parachute Association. 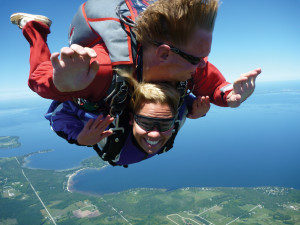 The weather is absolutely unreliable in Door County, and that sometimes presents a challenge, which is why Mercedes recommends scheduling skydiving at the beginning of your vacation.

“Michael’s a phenomenal instructor. He taught me everything I know. I did the required 25 jumps, graduated, and got my skydiving license. I wouldn’t have wanted anyone else – he was such a fantastic teacher,” Andrew said.

Andrew loved the experience so much, he convinced his sister Allison to dive last year in celebration of her 30th birthday.

“I wanted to take a big leap into a new decade. It was thrilling. When the parachute opens you just float down and see all of Door County,” Allison said. “I would do it again, to try to take in whatever I missed the first time.” 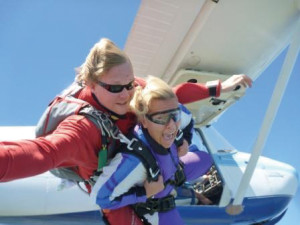 Andrew continues to recruit family members to take part in what he describes as an experience that cannot be fully realized in words – something you just have to do for yourself.

“I started to educate my parents more about the sport, and how calculated it is,” Andrew said. “Now, I’m going to jump with my Dad over Memorial Day. Michael’s going to take him in the tandem, and then I’ll jump out a few seconds later. I’m pretty excited that I got him on board!”

Skydive Door County offers locals and tourists a chance to see the peninsula from a bird’s eye view. They give people wings – even if you only go once, it’s a jump that you’ll remember for the rest of your life.