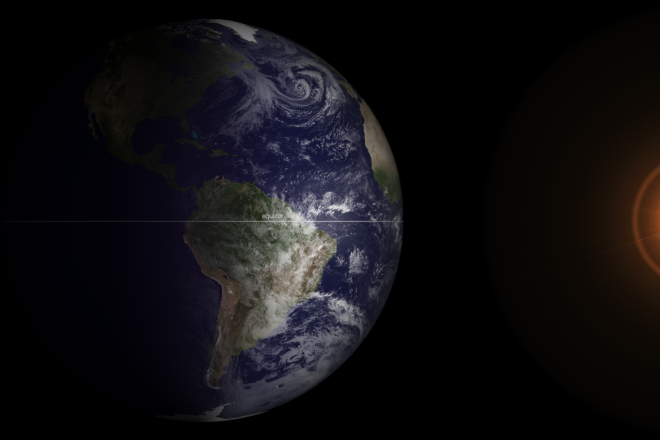 The DOT kept telling us that they would construct the roundabout at Michigan Street in Sturgeon Bay this spring and on the astronomical first day of spring (the Vernal Equinox), sure enough, the barricades went up.

We are told that roundabouts prevent serious head-on collisions, and that is a good thing. But had there not been a catastrophic collision in the early years of the Solar System, there would not be spring or any seasons. And without seasons, there might not be us!

During its formation, the Solar System was a chaotic and dangerous place. Chunks of rock were zipping through space. Due to the force of gravity, these chunks of matter crashed into each other and clumped, so with each additional impact, the chunks got larger and larger, eventually forming what we now call planets.

Even planet-sized rocks collided. Scientists and mathematicians speculate that at least once and probably several times, a planet-sized object collided with Earth and knocked it off kilter.

Many astronomers subscribe to what is called the “Giant Impact Theory.” It supposes that a Mars-size planet collided with the Earth with an impact so intense that the impactor was obliterated. Molten debris from both the impactor and the Earth were ejected into space. Much of this material probably rained back onto the Earth, but some of the suspended material formed a ring around the Earth that eventually clumped together to form our moon (or perhaps two moons, which eventually clumped into a single moon). Understand that this is just one of several theories and while the evidence for this theory is compelling, astronomers truly do not know for sure how the moon came to be. 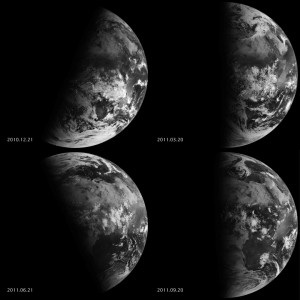 What we do know is that, presumably because of an impact, the Earth tilts on its axis (an imaginary line going through the center of the Earth) at 23.5 degrees. Over thousands of years, this axis wobbles a bit but, thanks to the gravitational pull of the Moon, it is pretty stable. The Earth turns on its axis, making day and night, but it also travels around the Sun each year.

No matter where it is in its annual orbit, the Earth is always tilted the same direction.

For six months each year, the Northern Hemisphere is tilted toward the Sun. The rays of light are direct and consequently, more intense. The length of daylight is greater. This is our summer.

The other half of the year (on the other side of the orbit), the Northern Hemisphere is pointed away from the Sun. Days are short, the rays of light are slanted and far less intense, and it is cold.

We currently are about halfway between summer and winter. Our days and nights are just about equal. And while our temperatures will bounce around for a while, they will become milder. It’s spring.

Were it not for the tilt of the Earth and the orderly progression of seasons, life as we know it could not exist. And now as the Earth warms and seems to come alive, it’s spring…and they are building roundabouts and repairing the Bayview Bridge.

Even with road closures, one can get to the Astronomy Campus (2200 Utah Street) for the April activities of the Door Peninsula Astronomical Society (DPAS). Utah Street will be open for the duration of the construction or you can follow Memorial Drive passing under the bridge, and turn left on 18th Place till you reach Utah Street.

On Tuesday, April 5 at 7 pm, DPAS holds its April General Meeting and visitors are encouraged. At this educational event, the illustrated presentation will be “Introduction to Video Astronomy” offered by David Lenius. Dr. John Beck will introduce “The Viewing Target of the Month.” Refreshments and fellowship are a part of DPAS meetings, which are held at the Stonecipher Astronomy Center, 2200 Utah Street.

On Saturday, April 9, started about a half-hour after sunset, the members of DPAS will open the StarGarden and Leif Evenson Observatory for an evening of night sky viewing whether or not we have clouds. We now have the technology to explore the night sky by streaming telescope images from around the world.