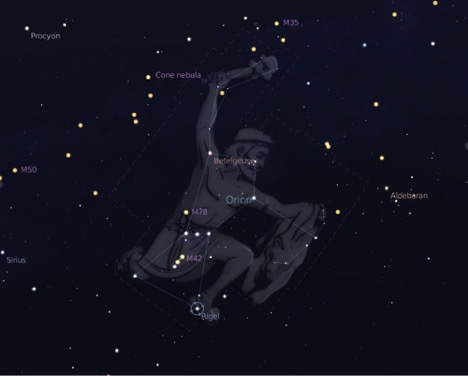 Up high and proud in December’s sky is the magnificent constellation Orion. The best that the winter sky has to give us! Three bright stars, Alnitak, Alnilam and Mintaka, all in a row, define his belt, and hanging from this belt are several stars that would be the scabbard for his sword. The middle one is blurry. AmerIndians referred to it as “the fuzzy star.” This is the great Nebula in Orion.

The reason for its fuzziness is that it is not a simple star: it is an enormous expanse of gas, 1400 light years distant (at 5.8 trillion miles a year!) and some 20 light years across. In fact, it has enough gas to make more than 100 stars and is always in the process of making them.

The Hayden Planetarium of The American Museum of Natural History in New York City, put on a program in the late winter of 1977, named “The Star Factory.” I went to it and it changed the way I saw the sky. It was the first time I heard that we, you and me and all us and our pet dogs and everything, is made of stardust. Every atom in our bodies, iron, calcium, oxygen, was created in the heart of a star and distributed throughout the universe in those titanic stellar explosions in the finale of the struggle between the contraction of gravity and the immense heat of expansion called supernovas. Seeds of possibility are blown throughout space. 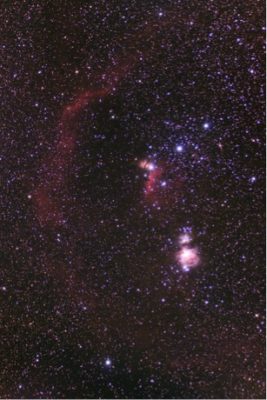 Even our own Sun started this way. It is a second, maybe even a third, generation star. And how do we know this? Spectroscopy. Spectroscopy reveals the patterns of hydrogen, helium, carbon…all the way through the elements. Old stars are almost entirely hydrogen, with some helium. The ash of the burning of hydrogen is helium, and then helium burns and so on, right across the periodic table.

In a small telescope and in the heart of the Nebula is a formation called “the Trapezium.” Four bright stars, just babies as stars go, maybe 50,000 years old (our Sun is about 5 billion years old), full of energy, and with all their youthful ebullience, they are blowing away the embryonic gas which gave them birth, making that gas glow such that we, 1400 light years away, can see the glow that their youthful energy gives to what had been their stellar womb. You’d think we’d have a more exciting name than M-42!

A few weeks after the program and hoping for some warmer weather, I left the city on St Patrick’s Day, March 17, heading south on the Jersey Pike to my sister and brother-in-law’s place in Jacksonville, North Carolina, some 700-plus miles away. He was an ENT and she a nurse on the Marine base there. It was cold. Under my jeans I had on long underwear and under that was a Queen-size set of nylons (quite warm, though I prayed not to have an accident!) I still kept my knees hugged to the side of my CB550 engine. I finally lost the snow line just south of Richmond, Virginia. Riding a cycle a good distance is an experience of oneself: alone, vulnerable, surrounded as I was in darkness by the time I turned east off of I-95 onto what is now 70E over to Kinston, and then due south on 258: pitch black, two lanes, not even a pair of another seeker’s headlights to keep me company, and just a hundred or so miles to go as I remember, when I lifted my head and there it was: Orion’s Nebula, bright, beautiful, and making the stuff that one day could be somebody else, due south and magnificent. I have never felt more energized, more connected, more at one with the universe than that moment. I wanted to look longer and say something stupid, like “Hi, Mom!”

The cold in my bones dissipated and I was conscious of that core of life in me that burned just like those stars. Of that stellar dust, life is made!

Some morning soon, plan to go outside at maybe 5:30 am or so on a crisp morning. If you look south and then up, you’ll see Orion and its Nebula. Of such we are made. (Then go get a cup of coffee and celebrate life!) We are, indeed, the universe become conscious of itself.