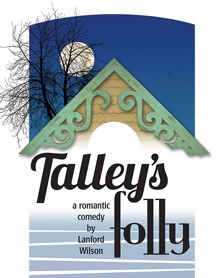 Stage Door Theatre Company presents Talley’s Folley, a romantic comedy by Lanford Wilson, through July 25 at Third Avenue Playhouse in Sturgeon Bay. The play features Drew Brhel and Amy Ensign.
Winner of the Pulitzer Prize, Talley’s Folly is a lyrical romance that follows the unlikely courtship of Sally Talley and her Jewish suitor, Matt Friedman. Set on July 4, 1944, the play unfolds magically in a Victorian boathouse on the banks of the Missouri River. Matt arrives just at twilight to confess his love to a reluctant Sally, who believes she is no longer capable of loving.
This is Brhel’s debut at Stage Door Theatre Company. He is also an eight-season veteran of American Players Theatre in Spring Green, and has appeared in Shakespeare festivals from coast to coast.
Ensign has appeared in numerous productions of Stage Door Theatre Company, Door Shakespeare and American Folklore Theatre’s The Spitfire Grill. She has also directed productions for the StageKids program and for Sevastopol High School.
Performances are held at 7:30 pm, Tuesday through Saturday, and 2 pm, on Sunday. Tickets are $22 general admission, $10 students, and $5 child. For more information visit thirdavenueplayhouse.com.