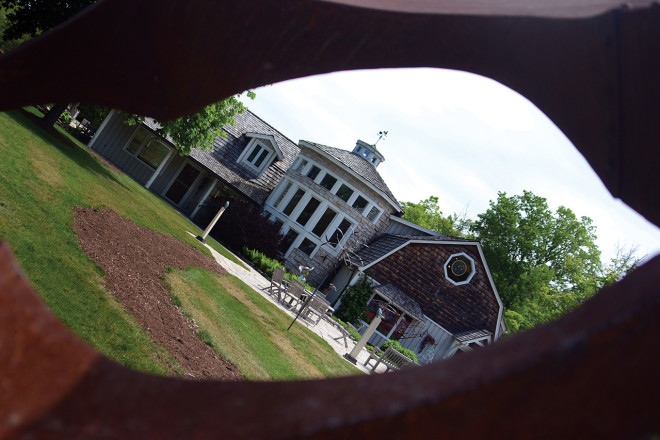 Assembling the gallery. Hanging the show. Or, as Shari Gransee, owner of Fine Line Designs Gallery, calls it, “putting Humpty Dumpty back together again.” 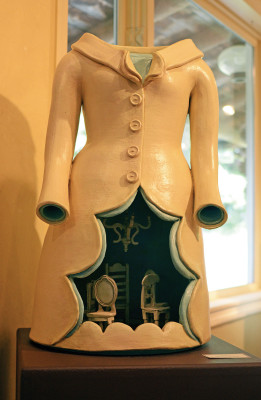 It’s the day before opening day at Fine Line, and to an unstudied eye, the gallery looks ready. Located on the north end of Ephraim, the gallery began as the Seaquist homestead in 1853 and has been a farm, a fiber studio, and a furniture shop before becoming the multi-level gallery that now lures visitors daily from May through October and weekends in the off season. The entry room was once the chicken coop, built in the 1950s.

The gallery space has a clean rustic look, with a wooden winding staircase and the original ash beams that Gransee says were probably cut from a forest in Baileys Harbor. “How wonderful is it that so many of the top galleries in Door County are in these structures which used to provide for families in one way, and now house another way to provide for our families,” she says. Her comment is a nod to Woodwalk Gallery and Edgewood Orchard Galleries, both of which are also housed in agricultural buildings.

Though the gallery now houses some of the region’s finest painters and sculptors, it retains its accessible charm. “Beautiful art doesn’t have to be expensive,” says Gransee. “We’ve worked hard at finding this variety, of style, media, and price point,” she adds. 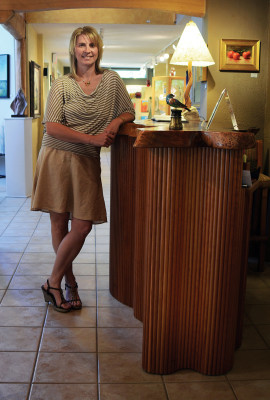 Gransee began working at the gallery in 2001, and in 2007 she took over ownership from her mother-in-law Connie Hatch who, in 1999, had expanded the small space with a silo and exhibition room. Although Gransee is now taking the gallery in her own direction, Hatch remains involved through the jurying process and also by being grandma to Gransee’s two-year-old daughter.

“I love the gallery,” says Hatch. “It is a place of such incredible serenity and it is uplifting. In all my years here, I have never, ever seen anybody leave here grumpy or out of sorts.”

As for handing the reins to her daughter-in-law, Hatch is honest and unequivocal. “Shari and I have such completely different approaches to life. But under her, the gallery has truly only gotten better. She gets it – this isn’t a job, it’s a life,” says Hatch.

“Connie has an unbelievable vision,” says Gransee. “She deserves a lot of the credit for what this place has become.”

What Fine Line has become is one of the top fine art destinations in Door County, featuring nearly 100 regional and national artists, including Door County names such as Stephanie Evans, Pamela Murphy, Joel Thomas and Gary Orthober. Still, visitors are as likely to find a lovely pair of earrings or a unique hand-blown vase as they are to walk out with a signature landscape or beautiful ceramic sculpture. 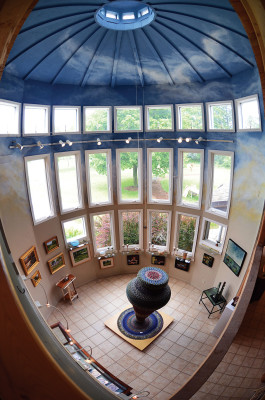 “My job is to bring original art to people so that they feel lucky every day that they have it,” says Gransee. She loves watching her customers react to the art.

“Good art sells itself,” she says. “We just have to inform people.” She finds that what many people connect with is nostalgia – objects and places that have strong emotional resonance, sharing “The other day a man came in and saw this wonderful painting of a wrench, and he just stopped in his tracks and said ‘That’s how I made my living.’ It really spoke to him.” He bought the painting.

Pamela Murphy, the iconic Door County painter who has an exclusive local relationship with Fine Line, is generous with her praise of the gallery.

“Fine Line is one of the top galleries in the county. From an artist’s point of view, they are really great to work with. Their space is beautiful – especially the combination of the showcase exhibition space and the larger gallery. They’re very supportive of their artists being involved in other ways in the community,” she adds, “I’ll be displaying a piece at the Miller Art Museum in the fall – I don’t know if every gallery would allow their artists to do that.” 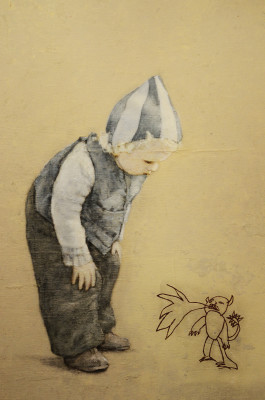 Fine Line’s grounds also include a two-acre sculpture garden which invites visitors to linger a while longer outside and enjoy the large-scale metal works which are scattered throughout the paths and perennial beds.

“I feel so lucky to be surrounded by this incredible beauty every day. It’s not hard coming to work,” says Gransee, who employs three part-time workers, all of whom have been with Fine Line for years. “People love seeing the same faces when they walk in,” she says. “They get inspired here, they’re happy when they come through that door.”

Gransee herself is not an artist. But her genuine love and admiration of the work that surrounds her is both infectious and highly informed. She points out the intricate detail on an etched, painted metal landscape of a barn at twilight. “Isn’t that amazing?”

Despite her easygoing attitude, Gransee has a discerning eye, and she heads up the jurying process with high standards for quality and craftsmanship. “This year I only took two new painters on,” she says. She also leads the jury process for the Town Line Art Fair, a huge outdoor event on the grounds of Fine Line which marks its 39th year this October.

“No one who knew me in high school would ever have predicted I would own a gallery,” says Gransee as she strolls towards a painting. And now? “I don’t think there’s another job I’d want.”