Nearing his 93rd birthday, Florian Kwaterski believes he’s the oldest man in Baileys Harbor. He was born in Green Bay in 1919, and moved to Door County when he was three, first living at the end of Summit Road, near the Candioto farm. It hasn’t been an easy life for a man who, at one time or another, owned many businesses in Baileys Harbor and elsewhere in the county.

When he was 10, the Kwaterskis bought the former Noelck dairy farm that included most of the land from Highway 57 to Kangaroo Lake and from Kangaroo Lake Road to County E. The family of nine lived in the small house behind the two-story, white house on the corner just south of Maxwelton Braes that was the home of the local banker. 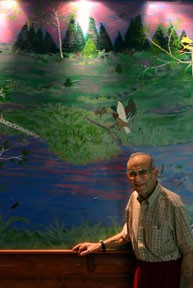 In his 90-plus years, Florian Kwaterski has left a mark on many Door County businesses. He stands in front of a wall-size mural, which was painted as a gift last winter by Terry VanVorous of Sturgeon Bay, whom Florian befriended when Terry was young and needed work. Photo by Katie Sikora.

Florian walked to school in Baileys Harbor or rode a horse he stabled behind what is now Harbor Fish Market. In really bad weather, the district paid parents 50 cents a day to drive children to and from school in a buggy. The family had a dairy herd in the now-deserted barn that’s still standing on North Kangaroo Lake Road.

“Then the depression came,” Florian says. “The cheese factory that was located where the Pulse/Door County Living office is now could only buy so much milk every morning – whatever came in first. There was quite a race coming into town.”

Florian helped out by caddying at Maxwelton. “There were about 100 of us,” he says, “even married women, desperate for work. At first we made 75 cents a round, but we went on strike and were raised to a dollar.” Still, the Kwaterskis couldn’t keep up the mortgage payments on the farm, and their neighbor, the banker, foreclosed for the $4,400 they owed.

“The Works Progress Administration put us on a farm where the Baileys Harbor ball field is now,” Florian recalls. “To get to high school at Gibraltar, I rode a horse to Mann’s farm on County F and went the rest of the way in their car.” He graduated in 1938, and helped his dad with their stable, then located behind what later became the Common House.

When Florian married Ada Walther in 1941, his dad gave him seven horses, and he set up a stable at the Lucerne Hotel in Sturgeon Bay, where the Lodge at Leathem Smith is now. He also worked at the shipyards off and on for 17 years, proud to be number four on the union roster.

Drafted in 1944, he went in as a drummer but was soon handed a rifle. He earned three bronze stars and a sharpshooter’s medal as part of the 28th Infantry Division that liberated Paris. He settled in Sister Bay after the war and returned to work in the shipyards, but work soon dried up. Florian’s family was living in a dilapidated old trailer, and he begged lumber to fix up an old chicken coop and granary for a better home.

Eventually, Florian was able to open a stable on Flint Ridge Road in Sister Bay that also featured barbecues, hayride parties and square dancing. When his dad became manager of the Sister Bay Hotel, now Sister Bay Bowl, Florian took over the lease on the farm his dad had been renting. Things were finally looking up for the Kwaterski family. A fellow financed the two men to buy land in Ephraim where the Summer Kitchen is now located. Florian built another stable, and his dad, a motel.

Florian and Ada were also entertainers, he playing drums, guitar and upright bass and she accordion and organ, at a club in one of the oldest buildings in Baileys Harbor. The owner owed them money, and in 1962, when Florian went to collect, he ended up owning the club, which he renamed Flo-Ada. When it burned in 1972, it was rebuilt as Florian II. Florian also built the first motel and pool in Baileys Harbor, now Beachfront Inn, and ran a filling station and sold snowmobiles where Boettcher’s auto dealership once was, now Nelson’s storage building.

“All my employees were pretty girls,” he says. “I dressed them in shorts and shirts like cocktail waitresses. They got a penny for each quart of oil they sold and a penny for each gallon of gas they pumped. There was gas running all over the road as they ‘accidentally’ pumped too much.”

Emma Toft talked him into buying the corner lot next to the post office and didn’t want the money, just one percent interest. He tore down the 17-room Toft family home, and Emma leased the house next door, now the Red Geranium shop. It was the only real estate she ever sold. After Gordy Brann, greenskeeper at Maxwelton Braes died, Florian managed the golf club for four years.

His last business venture was Baileys Grove Travel Park and Campground on County F that he created from an abandoned airport. “I planted every tree by hand,” he says. He also bought land across the road which he subdivided for several homes, including his own and those of two of his three sons. Twins Jerry and Joe now own Florian II, purchased from their dad, and the Blue Ox, that they acquired later. Jerry has been Florian II’s chef for 32 years, while Joe is the beverage manager.

Florian’s second wife was the former Betty Stromberg, the daughter of one of three brothers from Sweden who were the first to live on Echo Island in Kangaroo Lake. At age 10, she had first noticed the handsome kid helping his dad with yard work on the island. She’s now in a nursing home near Madison, and Florian, whose health is failing, plans to move this fall to Scandia Village senior living community, where Jeff, his third son, is the all-around handyman.

Florian has always been a Baileys Harbor booster. In 1939, he played on the local baseball team and later managed it, and he was in charge of minstrel shows in the 1960s and ‘70s sponsored by the Lions Club at the old Lake Theatre. He promoted the idea of setting up lighted Christmas trees through town. Most importantly, he was a strong supporter of St. Mary’s of the Lake Catholic Church and helped Immanuel Lutheran Church, which his wife attended, with their dinners.

“I’ve been through it – ups and downs,” Florian says. “I built up a lot of businesses, then sold them. When I built a swimming pool next to the lake and when I hired girls to work at my filling station, people said I was a dumb Polack, but it all worked out. Now I’m just interested in my family. I love them, and they are good to me.”