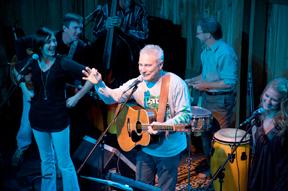 Julian Hagen and friends at Camp David as part of the Fishstock concert series.

This summer, I was part of an upstart company whose primary goal was to bring quality live music to Door County. To be fair, many other businesses and individuals have been doing this for years on the peninsula, but, like those enterprising people, we thought we might be able to fill a different musical niche.

Our first show was on a Thursday night at the Door Community Auditorium. We had a slate of wonderful performers, a bunch of advance marketing, and a fair bit of word-of-mouth. Advance ticket sales looked bleak, but we chalked it up to our potential audience being last minute with plans. The night of the show, we had 50 eager concertgoers, which was a tiny bit disappointing. The people at the show enjoyed themselves, but still – why hadn’t more people showed up?

Over the next few days, I quizzed the people who had known about the show, but hadn’t attended. I got a lot of what I was expecting – work commitments, just plain forgot, etc – but the one reason I hadn’t expected was that the majority of our performers played around the peninsula on a regular basis – and for free.

My interest being piqued, I began to get bits of feedback through the grapevine – stories of performance arts and live music venues being unable to compete with the sheer amount to free music that exists on the peninsula.

What happens to the musical economy of Door County when there are just as many free live performances as ones you have to pay a ticket price for? 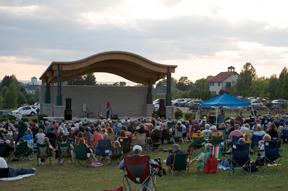 “It’s a Catch-22, to be sure,” says Kaye Wagner, Executive Director of the Birch Creek Music Performance Center. Birch Creek banks on the outreach of their free community concerts to, in part, drive some traffic to their performance space in Egg Harbor. Birch Creek’s students, the Birch Creek Ambassadors, play all over the peninsula during the summer months.

“Our theory was always that the free concerts would bring people to our concerts in the evening,” Wagner says. “We’ve found that’s not necessarily true. As part of the students training requires us to provide outreach opportunities for them, but sometimes our audiences aren’t aware that the students playing that community concert aren’t the focus of our evening concerts.”

Nearly every Door County community has a summer concert series – most of which have been a part of these communities for quite some time. Most schedule their concerts on weekday afternoons, so there’s little interference with their music and offerings of the local performing arts organizations. Most of the performers in these weekly series also tend to be local musicians. Rachel Willems, Tourism Administrator for the Ephraim Business Council (EBC), says the village’s Evenings in Ephraim (EIE) concert series features mostly Door County performers.

Willems also goes on to say that this year’s attendance growth for the concerts was phenomenal. “At our first concert in mid-June, there were 150 people there, which is the most people I’ve ever seen at a concert at Harborside Park. I can safely say that our attendance doubled over last year.”

The budget for EIE is about $7,000, which includes the fees for the talent as well as any marketing and advertising for the series. It represents a considerable chunk of the room tax monies the EBC receives from the Village of Ephraim, but, Willems says, “It’s a win-win. It gets people into the village for shopping and dining, and visitors leave with a favorable opinion of the village.”

Nancy Fisher, President of the Village of Egg Harbor, agrees. The Village of Egg Harbor board, along with the Egg Harbor Business Association and Terry Lundahl of Dragonfly Agency, are responsible for the Peg Egan Performing Arts Center Summer Concert Series, which began in 2008. The Peg Egan is a bit different from a typical community concert series in that Lundahl brings in national touring acts to the outdoor Peg Egan amphitheater – Willy Porter, Tab Benoit, and Patty Larkin are just a few of the acts that have been on stage at Peg Egan this year. Estimations on attendance per show are anywhere from 800 – 1,000 people, which occur on Sunday nights during the summer.

“We wanted to take some of the room tax money and use it in a way that was family-friendly and inviting,” Fisher says. She says they give Lundahl’s Dragonfly Agency $35,000 to use toward the programming and marketing of the Peg Egan concerts, with additional sponsorships being sought out by Lundahl herself. “We’ve seen a definite ripple effect between the concerts and the business community of Egg Harbor,” Fisher says.

In talking with Terry Lundahl, music programmer for the Peg Egan PAC, it’s obvious that she is proud of how quickly the concert series has grown (2008’s attendance ranged from 300 – 500 people per concert), but she is also sensitive to the plight of the many paid ticket venues on the peninsula that also have concerts on Sunday nights.

“I know exactly where they are coming from – I’ve been there. I’ve had situations where I thought people were saturating the market I was in. But when I stepped outside and looked at it, I realized that my programming was much different than theirs was. No one wants to take business away from anyone – and that’s certainly not our intent. We look at these concerts as a gift to the Door County community.”

Lundahl goes on to say that she is very much open to finding a way for the paid venues to be able to perform at the Peg Egan in the future. “There’s no reason why we couldn’t work with other groups to make this more community-based than it already is. I would love to find a way to work together.”

Dave Ellmann, proprietor of Camp David and the Fishstock Concert Series in Fish Creek, hopes that this line of communication can indeed open. Ellmann has been staging his concerts on Sunday evenings for 14 years, and says his concert attendance fell 50 percent this year – much of which he attributes to the Peg Egan concerts, which occur on the same evenings during the summer.

“I can’t help but get a little frustrated when some of my diehard patrons only make it to one or two of my shows in a summer and then tell me the reason they didn’t make it to more is because of free shows down in Egg Harbor,” he says. “It would be nice to have communication about these things rather than splitting an audience, which is what I feel is happening now.”

Personally, I would hope that the Door County community would continue to support paid events as well as free ones, in spite of the current economic clime. I do feel there’s room for all of us if we can find a way to work together and space out our programming a bit more. And, regardless of paid vs. free, it only reflects positively on the peninsula. We have more music options in the county than ever before – and that’s a pretty great problem to have.